An Islamic relief charity has been forced to apologise after its members were caught holding an indoor party in breach of Covid rules with around 30 guests.

Chief executive Waseem Ahmad, general manager Azher Ayub and two directors were among guests pictured at the event in an office at the Islamic Relief Worldwide organisation’s clothes recycling HQ in Birmingham.

Pictures show the group of men sitting on the floor eating and talking close together, without any sign of social distancing.

It is believed that a smaller female-only group was in another room. 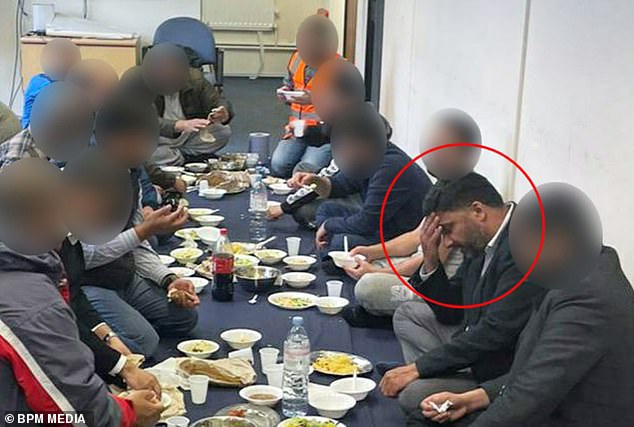 Chief executive Waseem Ahmad (circled), general manager Azher Ayub and two directors were among the 30 or so guests pictured at the event in an office at the Islamic Relief Worldwide organisation’s clothes recycling HQ in Birmingham

A whistleblower contacted Birmingham Live and said they did so because they were annoyed at the clear contravention of rules by senior leaders, when the charity insisted to regular staff it has a ‘zero tolerance’ approach to any Covid breaches.

The whistleblower, who also contacted West Midlands Police about the breach, said: ‘I felt it was really hypocritical of senior managers and the new CEO to so clearly be in breach of Covid rules, with a big group together, no social distancing, no masks, no other protections – yet they are stringent and don’t tolerate any breaches among the workforce at other sites in Birmingham and around the country.

‘That this was also going on while cases are going up again in the community and people are at risk of dying again is not good and they should be held to account.’

In a statement, the charity said they were ‘sorry’ that sufficient distancing was not observed at the gathering on May 20 at the offices of its clothes recycling operation in Landor Street. 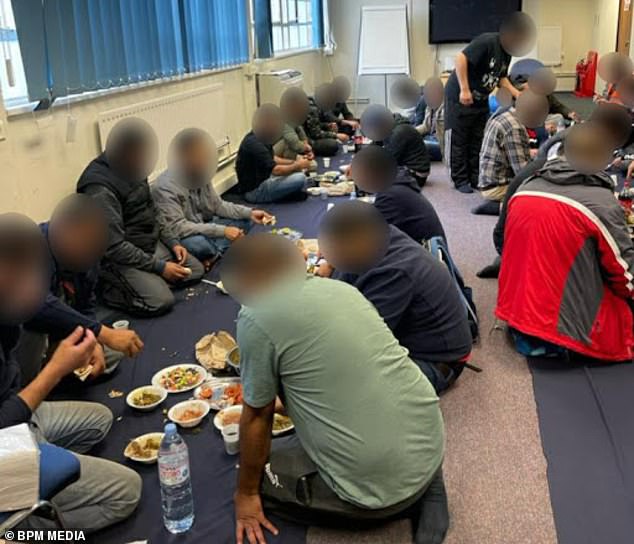 Pictures show the group of men seated on the floor eating and talking closely together, without any clear sign of observing social distancing

They said this came after a national ‘relaxation of government rules on May 17, when guidance signalled a further opening up with regard to meeting friends, family and colleagues’ – and that this ‘placed emphasis on personal judgement around risks.’

The May 17 rules referred to clearly state that up to six people or two households can meet indoors and up to 30 people outdoors.

They also claimed the attendees were part of a ‘working bubble’.

The charity has been involved in a series of relief efforts across the world. Close to home, the organisation has been raising funds and distributing food parcels to families in need across Birmingham.

It gave out hot and cold food parcels throughout Ramadan as part of its commitment to the vulnerable.

THE CHARITY STATEMENT IN FULL

‘Islamic Relief takes a wide array of measures to implement national Covid-19 rules and protocols in its UK offices, and in its operations and delivery of aid to vulnerable communities across the world.

‘In the UK nearly all our staff are working from home, and we have social distancing, masks, sanitiser and one-way systems in place to protect the small number who do come into the office.

‘Our teams distributing food packs and other aid across Eastern Europe, the Middle East, Africa and Asia are all equipped with personal protective equipment to protect themselves and others from the virus.

‘In this context of strict Covid-19 compliance overall, we are sorry to say that sufficient distancing was not observed by all at a post-Eid celebration meal organised for a group of up to 30 staff in Birmingham on 20th May.

‘This was shortly after the further relaxation of government rules on 17th May, when guidance signalled a further ‘opening up’ with regard to meeting friends, family and colleagues and placed increased emphasis on the need to exercise personal judgement around risks.

‘All staff at the meal had their temperature checked on arrival at the office and were asymptomatic.

‘We regret that some did not sufficiently maintain the routine distancing of the working day during the celebration meal.

‘We will learn from this isolated incident to redouble our efforts in making sure all our activities are fully Covid-compliant.’