Allowing the Cheltenham Festival to go ahead in March could have helped ‘accelerate the spread’ of Covid-19, a former government chief scientific adviser has warned.

Sir David King, who advised the government between 2000 and 2007 criticised the decision to allow the National Hunt festival to go ahead which saw a total attendance of some 250,000 across the four days.

The scientific expert described the mass event as ‘the best possible way to accelerate the spread of the virus’. 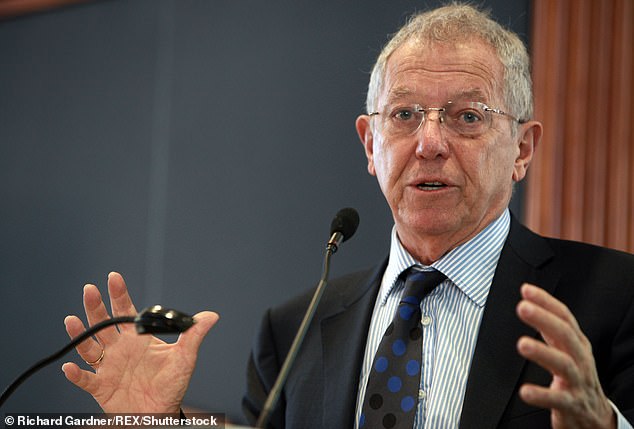 Former Chief Scientific Adviser Sir David King, pictured, has criticised the decision to hold the Cheltenham Festival in March which saw a cumulative attendance of 250,000 over the course of four days 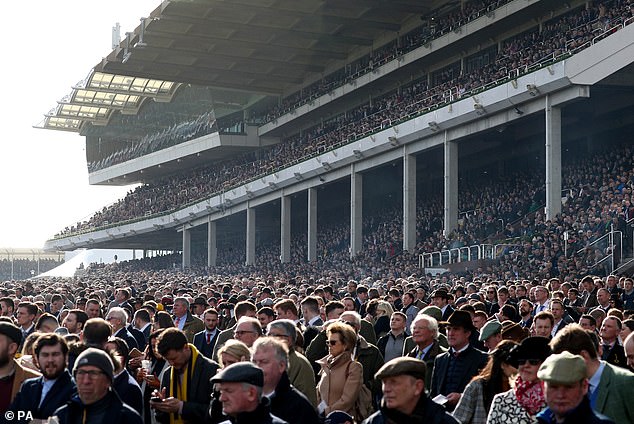 Thousands of people attended the festival in Gloucestershire, pictured above on March 13

The event, which is the highlight of the National Hunt season, started two weeks before Prime Minister Boris Johnson implemented his nationwide lockdown.

According to the most recent figures released by Public Health England, 192 people have died of Covid-19 between Gloucestershire Hospitals NHS Trust and Gloucestershire Health and Care Foundation Trust.

In nearby Swindon, 81 deaths have been reported at the Western Hospitals Foundation Trust.

During the 2001 foot-and-mouth crisis the Cheltenham festival was cancelled due to the risk of spreading the disease.

Sir David told the BBC: ‘When we talk about a pandemic, as I found with the foot-and-mouth disease, it’s when animals from different parts of the country are crowded together that you get the virus spreading most quickly,’ said Sir David.

‘In exactly the same way, when you have a horseracing event, [people] don’t stay anything like two metres apart.

‘It just seemed to me that this was the best possible way to accelerate the spread of the virus.’

Figures have shown that in the South West, areas surrounding Cheltenham racecourse have been worst hit by Covid-19 with 181 fatalities in local hospitals.

Thousands of race fans travelled to Cheltenham from Ireland with infectious disease specialists in Dublin claiming they have treated punters who attended the festival for Covid-19.

Paul Hunter, professor in medicine at the University of East Anglia, told MailOnline, said that the figures showing the higher death rate in Gloucestershire compared to other hospitals suggested ‘there is certainly something worthy of investigation’.

In quotes: What’s being said about whether Cheltenham should have gone ahead?

Paul Hunter, professor in medicine at the University of East Anglia: ‘Could the Cheltenham Festival have led to an acceleration of cases locally that has fuelled this local high mortality rate? This is certainly possible and in the absence of any other factors that I may not be aware of, is quite likely.’

Professor John Ashton, a former director of public health for Cumbria: ‘We know the Festival went ahead and a lot of people will have attended and worked there. It’s important we learn about what the potential is for coronavirus transmission at public events.’

Lawrence Young, a virologist and oncologist at Warwick Medical School: ‘I don’t think that allowing the Cheltenham Festival to go ahead was sensible but assume that the attendance was from far and wide, not just the locals.’

Paul Hodgkinson, Gloucestershire council’s Liberal Democrat group leader: ‘Future investigations may well conclude that events such as this were at least partly responsible for a significant proportion of the UK’s transmission, and the devastating consequences that we’ve seen as a nation.’

Sarah Scott, Gloucestershire council’s public health director, said: ‘There are many factors that could influence the number of cases in an area, including population density, age and health profile and the position of an area on the pandemic curve.’

Chancellor Rishi Sunak: ‘At every stage in this crisis we’ve been guided by the scientific advice and have been making the right decision at the right time’

Sue Smith, senior racecourse medical officer at Cheltenham Festival: ‘It’s simply not possible to know how and where someone who has tested positive for Covid-19 has contracted it’.

Jockey Club: ‘The festival went ahead under Government guidance to do so, like other sports events at Twickenham, Murrayfield, 10 Premier League matches and the UEFA Champions League, all with full houses that same week’

British Horseracing Authority: ‘The Government advice before and during Cheltenham was that mass gatherings were not a high area of risk, provided hygiene measures were in place and observed.’

He added: ‘But can we definitively prove it was the Cheltenham Festival that was responsible for this excess in the area? Probably not unless it was properly investigated, and even then we may not be able to prove anything.

‘Infection may or may not have spread at the racecourse itself or be transmitted by attendees who then went into local towns for dinner or other social activities.

‘Having said all that, could the Cheltenham Festival have led to an acceleration of cases locally that has fuelled this local high mortality rate? This is certainly possible and in the absence of any other factors that I may not be aware of, is quite likely.’

Local publican Andrew Grierson who ran The Beehive in Prestbury – which is a popular location for racegoers – died on Sunday April 12 of Covid-19 in the intensive care unit at Cheltenham General Hospital.

He fell sick in late March, less than a fortnight after the festival.

However, local MP Alex Chalk said it was wrong at this stage to blame the event for spreading coronavirus.

He claimed: ‘You wouldn’t judge the success of World War Two on the basis of what happened in 1939 or 1940. Now is not the time to start casting judgement.’

The government has been criticised over its decision to delay locking down Britain.

As well as the Cheltenham Festival, public health experts said Liverpool’s Champions League match against Athletico Madrid should have been cancelled.

The match, which took place on March 11, saw thousands of fans fly into Liverpool from Madrid, which was already severely hit by Covid-19.

Prime Minister Boris Johnson has said he will set out a ‘road map’ for easing coronavirus lockdown restrictions next week.

This will be a ‘menu of options’ with the dates and times driven by the current state of the outbreak in the UK, he added.

Ministers have faced continued questioning over the UK’s plan for lifting its coronavirus lockdown, as European countries begin to ease their own restrictions.

Italy and Spain are among those planning small steps to relax measures, while the Scottish and Welsh governments have set out different visions of how the current restrictions could be lifted when the outbreak is under control.

The next three-week review of the lockdown restrictions is due on May 7. 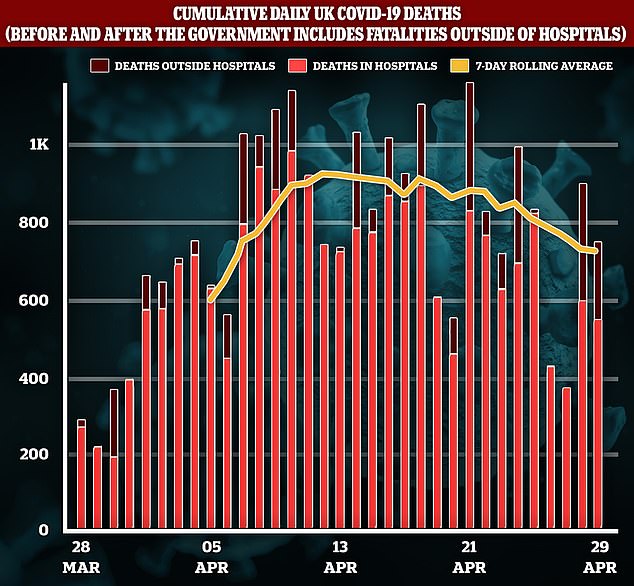