Climate change protesters have descended on the Melbourne Cup, using a van to block a main road outside the track and to stand on its roof and scream at punters.

Protesters on the roof were filmed by a fellow activist yelling at people walking into Flemington Racecourse before the main race kicks off at 3pm AEDT.

‘Eat your pheasant, drink your wine, your days are numbered, bourgeois swine,’ the protester on the roof could be heard yelling.

The protester behind the camera filmed herself arguing with police, claiming her driver’s licence had been seized by the officers.

‘So we’re at the Melbourne Cup, cops have just taken my driver’s licence and grabbed us, there’s a van blocking,’ she said. 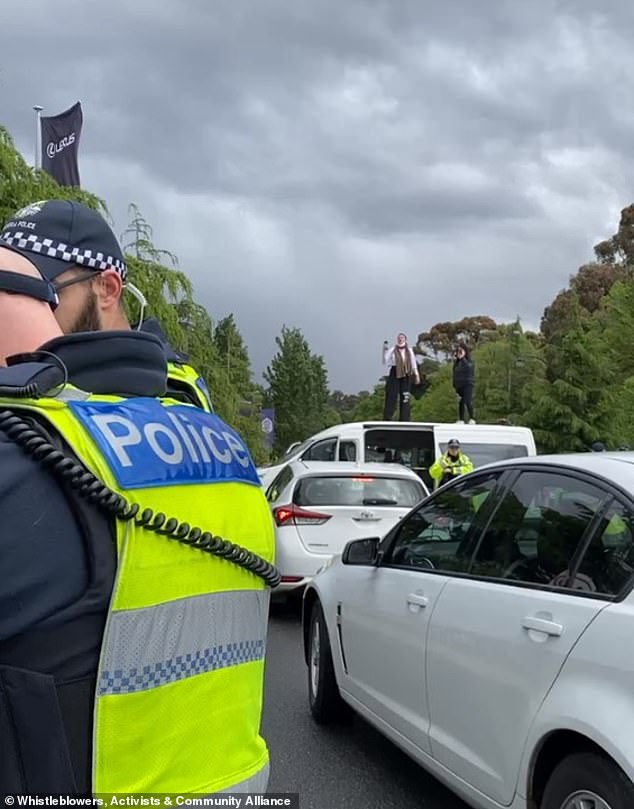 Protesters on the roof of the van yelled: ‘Eat your pheasant, drink your wine, your days are numbered, bourgeois swine’

The woman accused the police officer of calling her a ‘filthy c***’, a claim the policeman quickly refuted, reminding the protester their entire reaction had been recorded.

‘You’re allowed to call someone a c*** and grab them by their neck?’ the woman said in the video.

‘I was moving you out of the way,’ the police officer said.

‘No you weren’t, you were being a total a***hole and you know it,’ the woman said.

The woman behind the camera also said police were seizing her vehicle.

The police officer said she would be issued a ticket for doing an illegal U-turn on the road.

‘Must feel like a big man,’ the protester said.

‘I was trying to be considerate before you started smashing on the window with a metal rod.’ 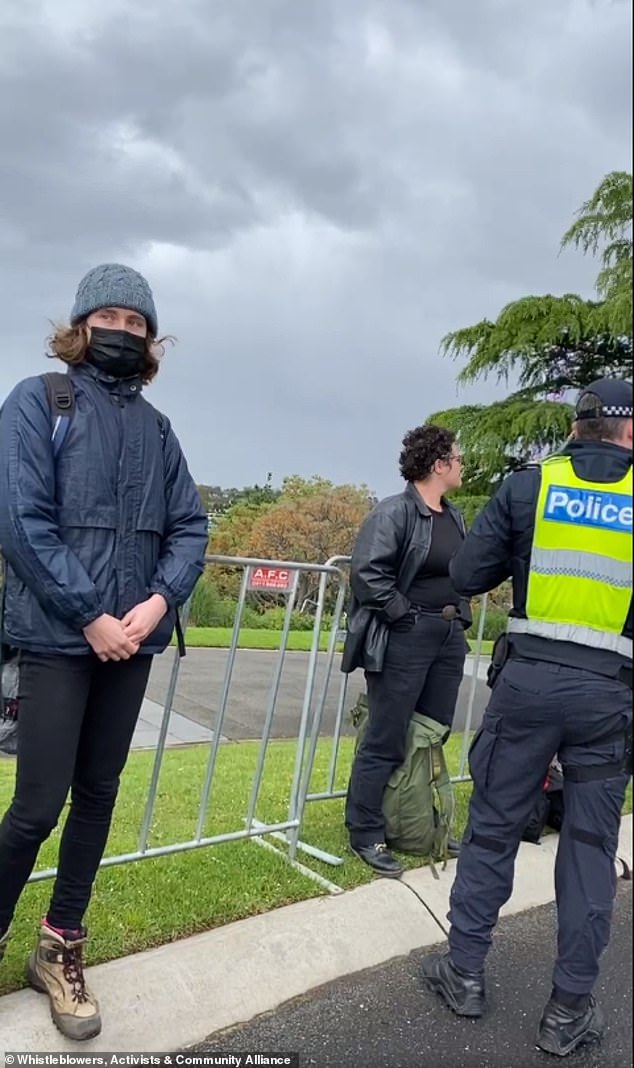 The woman was then given a direction to leave the area with the police officer requesting she not return to Flemington for the rest of the day.

The protest outside came as a self-admitted ‘problem gambler’ broke into the Flemington Racecourse on Tuesday morning before the Melbourne Cup to pour a strange substance on the track.

Alarming footage showed at least two people running onto the track in Flemington at about 6am on Tuesday to spray a dark liquid over the course in apparent protest against the Victoria Racing Club.

The substance has not officially been identified, but was labelled ‘oily’. One person has surrendered themselves to police.

The VRC confirmed officials cleaned a section of the track around the 1,500 marker on Tuesday morning and said it was safe for the race to continue.

Climate action protest group Extinction Rebellion in Victoria said on Tuesday 1,000 litres of ‘sludge’ had been dumped onto Flemington by ‘friends’ of the group.

‘We fully endorse the message of this person,’ the group said.

‘The privileged in our society are on notice that as crises deepen and we do not see justice for communities, individuals and animals, ordinary people will be driven more and more to undertake these sorts of desperate actions.’

The person who broke onto the track released their own statement via Extinction Rebellion which claimed they were ‘a problem gambler’.

Two races had already been run by the time news of the protest emerged. 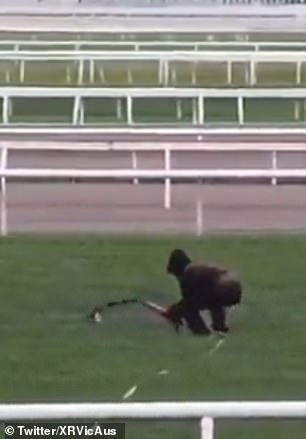 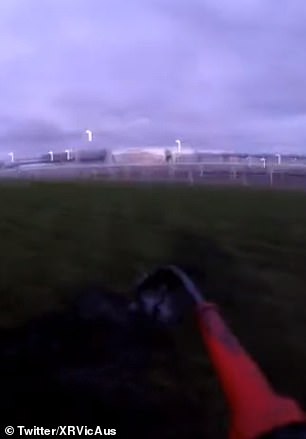 The ‘problem gambler’ protester (above), with the aid of at least one other person, filmed as they sprayed a dark coloured unknown liquid near the 1,500 marker of the Flemington track