Businessman and former federal MP Clive Palmer gave intentionally dishonest evidence in his Federal Court copyright fight over the Twisted Sister's hit We're Not Gonna Take It and the court should reject his claims, lawyers for record company Universal Music have said.

Universal, which holds the copyright in the band's 1984 anthem, is suing the United Australia Party founder for copyright infringement for allegedly using the song in political advertisements before the 2019 federal election. 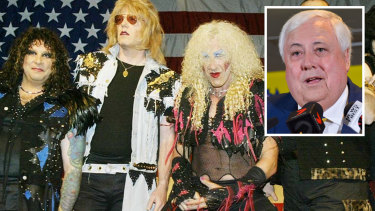 Clive Palmer, inset, said he has not infringed copyright in the Twisted Sister hit We’re Not Gonna Take It.

On Monday, the parties delivered their closing addresses to the court after a five-day trial. Universal's barrister, Patrick Flynn, SC, accused Mr Palmer of "toying with the court" and giving untruthful evidence.

Accepting his evidence would be akin to "climbing Mount Improbable … to borrow a phrase from Professor [Richard] Dawkins", Mr Flynn said.

Mr Palmer has alleged Twisted Sister frontman Dee Snider, who wrote We're Not Gonna Take It, "ripped off" the melody of O Come, All Ye Faithful and he did not need a licence from Universal to use the music.

Mr Snider denies the claims and gave evidence he unconsciously "transformed" the first six notes of the hymn into an original song, in a case of unwitting "inspiration, not duplication".

Mr Palmer also claims he penned original lyrics for his own song, Aussies Not Gonna Take It, after inspiration struck early one morning in September 2018, which meant he did not need a licence to use a reworked version of Twisted Sister's lyrics.

But Mr Palmer said his handwritten lyrics could not be produced in evidence because his staff threw out his bedside scribblings.

He told the Federal Court his lyrics were not inspired by We're Not Gonna Take It but by actor Peter Finch in the 1976 film Network, and suggested the actor had uttered the same "we're not gonna take it anymore" catchcry used by Twisted Sister.

But the court heard on Monday the famous words spoken by Mr Finch were "[I'm mad as hell, and] I'm not going to take this anymore."

"The first time we hear about the Peter Finch movie is Mr Palmer's evidence in cross-examination, isn't it?" Justice Anna Katzmann said.

Mr Flynn accused Mr Palmer of "toying with the court [in] giving that evidence" and said it "just does not stack up".

Mr Palmer's "evidence on the lyric creation was intentionally dishonest in the witness box because he thought it assisted him in the proceedings", Mr Flynn said.

The Federal Court has heard Mr Palmer's United Australia Party initially sought a licence to use the Twisted Sister hit but negotiations broke down in October 2018 after Universal requested details of the advertisements before granting any approval.

Mr Palmer's lawyers say that, if he did indeed use the Twisted Sister's hit, it fell within a "fair dealing" defence for works that are "satire or parody". Universal says the defence does not apply.

The most important news, analysis and insights delivered to your inbox at the start and end of each day. Sign up to The Sydney Morning Herald’s newsletter here, to The Age’s newsletter here and Brisbane Times‘ here.