Crowds demanding ‘Justice for Chris Kaba’ have assembled outside of New Scotland Yard to protest Met Police’s killing of the 24-year-old father-to-be.

Mr Kaba was shot dead by police in Streatham Hill, south London on September 5 after officers tried to stop his car when it triggered an ANPR alert. He was not armed.

The aspiring rapper’s death triggered a slew of protests led by Black Lives Matter, with the latest taking place outside police headquarters. Ex-labour leader Jeremy Corbyn is among those participating in Saturday’s march as he took to Twitter demanding justice for Mr Kaba.

‘We cannot live the pain felt by his family, but we can support them in demanding #JusticeForChrisKaba,’ Mr Corbyn tweeted.

The Independent Office for Police Conduct (IOPC) has launched an investigation into the fatal shooting and will consider race played a factor. The department said it would ‘explore all of the circumstances’ surrounding his death, including whether ‘race influenced any actions taken by the police’.

Investigators will also look into whether the police officers involved knew Mr Kaba before the incident, and how they came to be aware of the vehicle he had been driving, the watchdog said.

Mr Kaba’s cousin, Jefferson Bosela, who has taken on the role of family spokesperson says the IOPC’s timeline for the homicide investigation ‘lacks urgency’ and claims the office has not been ‘necessarily helpful.’

He spoke to Saturday’s crowd to thank everyone for ‘their love and support’ for the family during these ‘trying times.’ He also shared how Mr Kaba’s relatives saw his body on Friday and it was ‘so tragic.’

Another cousin, also speaking at the event, outlined the family’s demands which included transparency throughout the investigation and a ‘charging decision within weeks and not months.’ 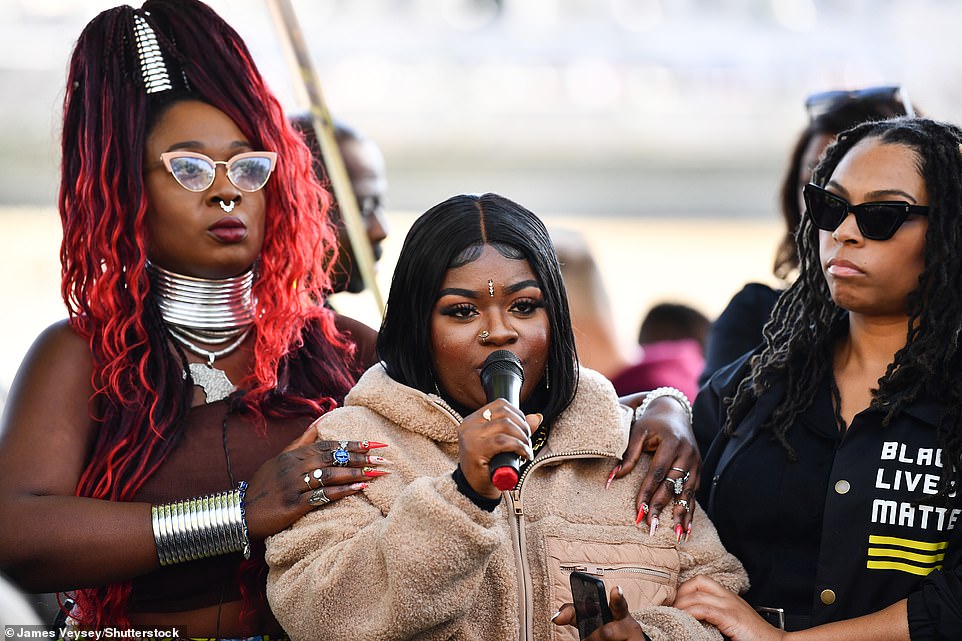 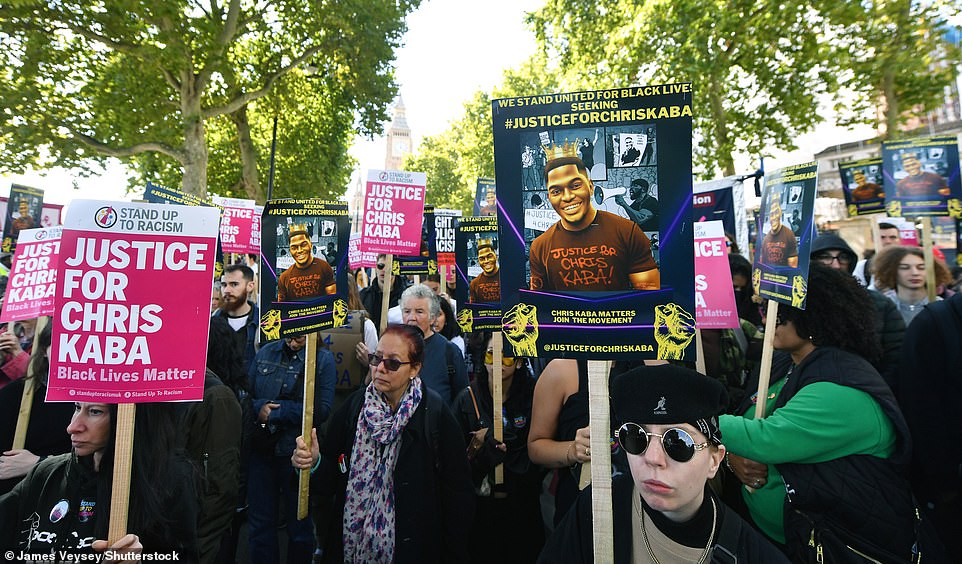 The aspiring rapper’s death triggered a slew of protests led by Black Lives Matter, with the latest taking place outside police headquarters 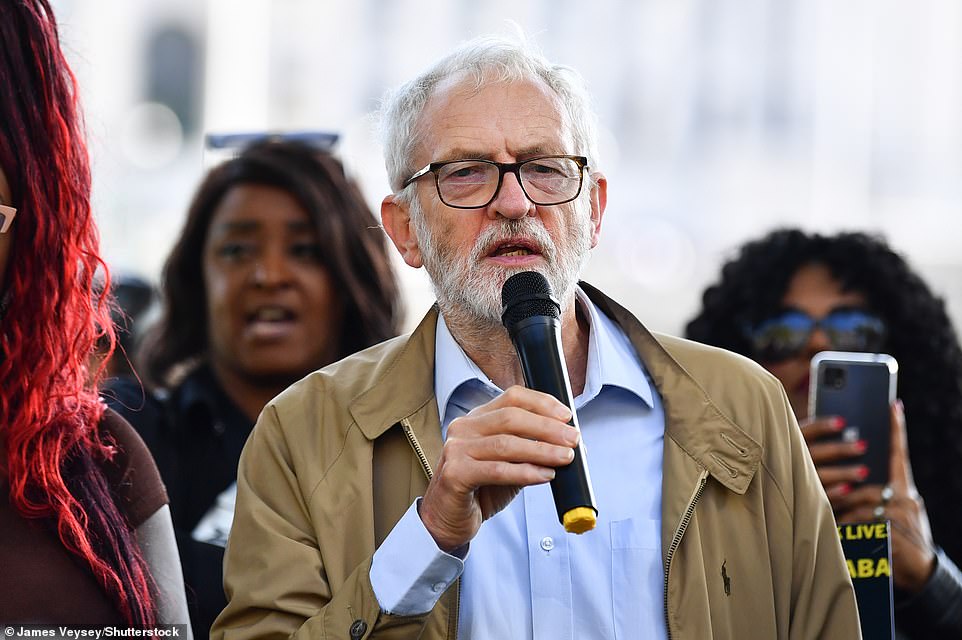 Ex-labour party leader Jeremy Corbyn was among those participating in Saturday’s march. He made a speech during the event and took to Twitter demanding the aspiring rapper be given justice 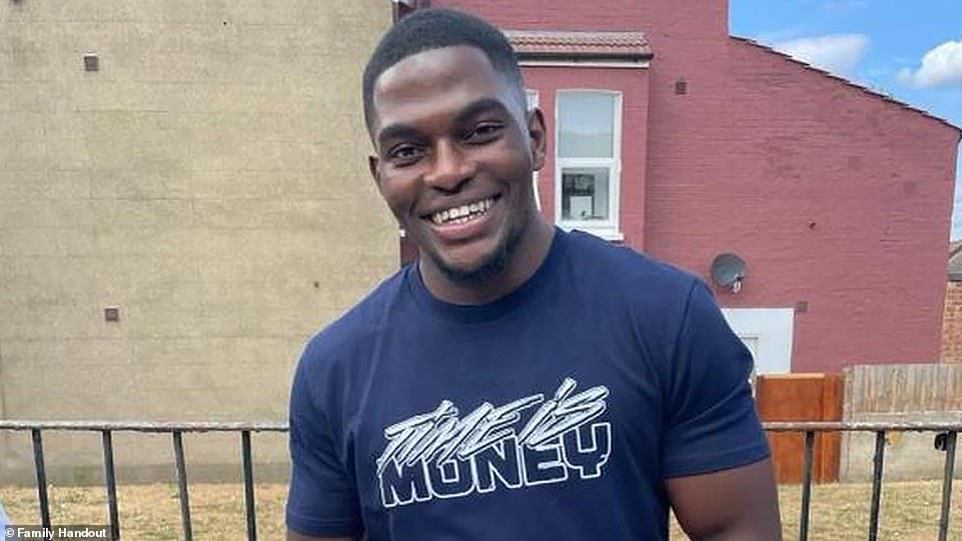 Chris Kaba, 24, (pictured) was shot dead by a Metropolitan Police officer during a traffic stop in Streatham Hill, south London on September 5 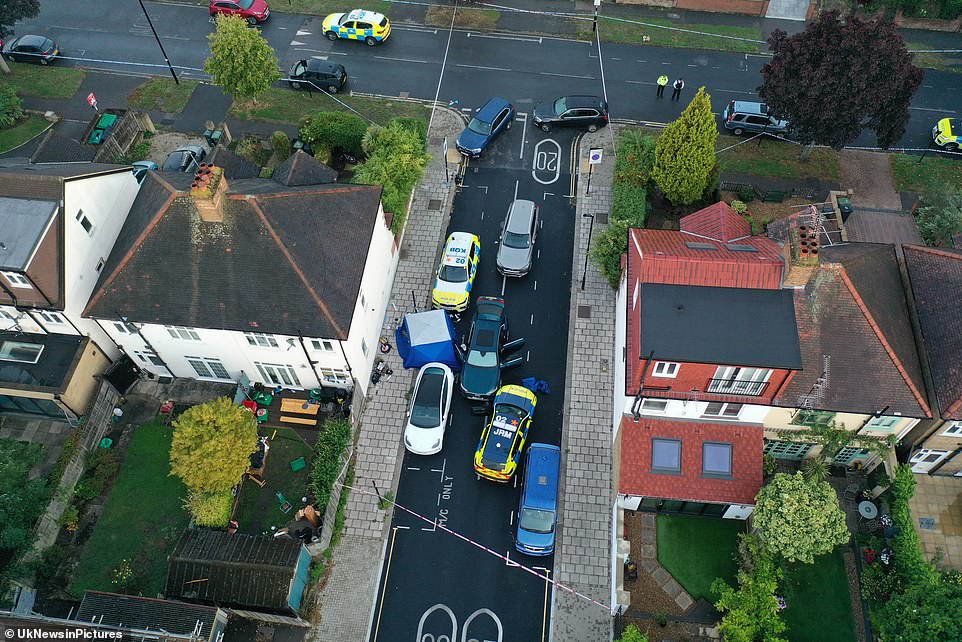 Police boxed in the car Mr Kaba was driving, pictured centre, before he was shot dead

‘On behalf of the family, I want to thank everyone for coming,’ Mr Bosela said, addressing Saturday’s protesters. Footage of his speech was shared on Twitter.

He said Mr Kaba’s parents couldn’t make the event because ’emotionally it was too much for them,’ but noted they sent a ‘message of thank you.’

‘They appreciate all your love and support and your kindness,’ he said. ‘It means the world to them, especially through these trying times.’

Another one of Mr Kaba’s cousin spoke out during the rally, demanding officials to take action and swiftly investigate his death.

‘Did the officers know that it was Chris in the car? Or were they simply following a suspect vehicle?’ she questioned, before arguing: ‘The suspended officer must be interviewed under caution without delay and keep family informed of this.

‘There should be a charging decision within weeks and not months. So, this is our demand. Hopefully we get somewhere within this week.’ 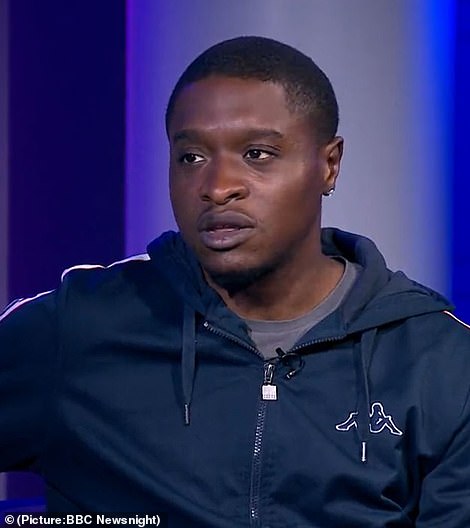 Mr Kaba’s cousin, Jefferson Bosela (pictured), who has taken on the role of family spokesperson says the IOPC’s timeline for the homicide investigation ‘lacks urgency’ and claims the office has not been ‘necessarily helpful’

Her remarks echoed prior claims by Mr Bosela alleging the family has not been routinely updated on the IOPC probe and that police have provided them with ‘vague’ information.

‘I don’t think the IOPC have been necessarily helpful,’ Mr Bosela told The Guardian.

‘We’ve been asking them very simple questions from the outset, such as whether the car was registered to Chris, and if the car was searched, whether a weapon was in the car. And we didn’t find out the answer to these questions until later.

‘We’ve only met twice face to face … Other than that it’s been over the phone and few and far between. We’re not really getting regular updates, although they are saying that they are.

‘A lot of the questions that we’re asking are going unanswered and when they do answer them, the answers are pretty vague. It hasn’t been the best experience for me or my family in regards to our relationship with the IOPC.’

Earlier this week, Mr Bosela revealed to BBC Radio 4’s Today programme that the family were not told Mr Kaba had been killed for 11 hours. They are also demanding to see bodycam and aerial footage of the incident.

‘The family found out 11 hours [after he died], so his mum would have woken up and have gone to work not knowing that her son wasn’t alive any more.’

He said: ‘We want the footage to be shown to the family to have a clear understanding of what happened.’

The family also wants a clear timeline regarding how long the IOPC investigation will take to complete.

However, despite their alleged limited contact with Met police and apparent dissatisfaction with the probe, Mr Bosela noted how several officers have expressed sympathy to the family over what happened.

‘There have been some officers, when we’ve gone to protest, who have said that they are just as angry as we are, and that they want answers and a swift investigation as well,’ he told the newspaper. ‘So that has been to a certain extent reassuring when we’ve heard certain police officers say that.’ 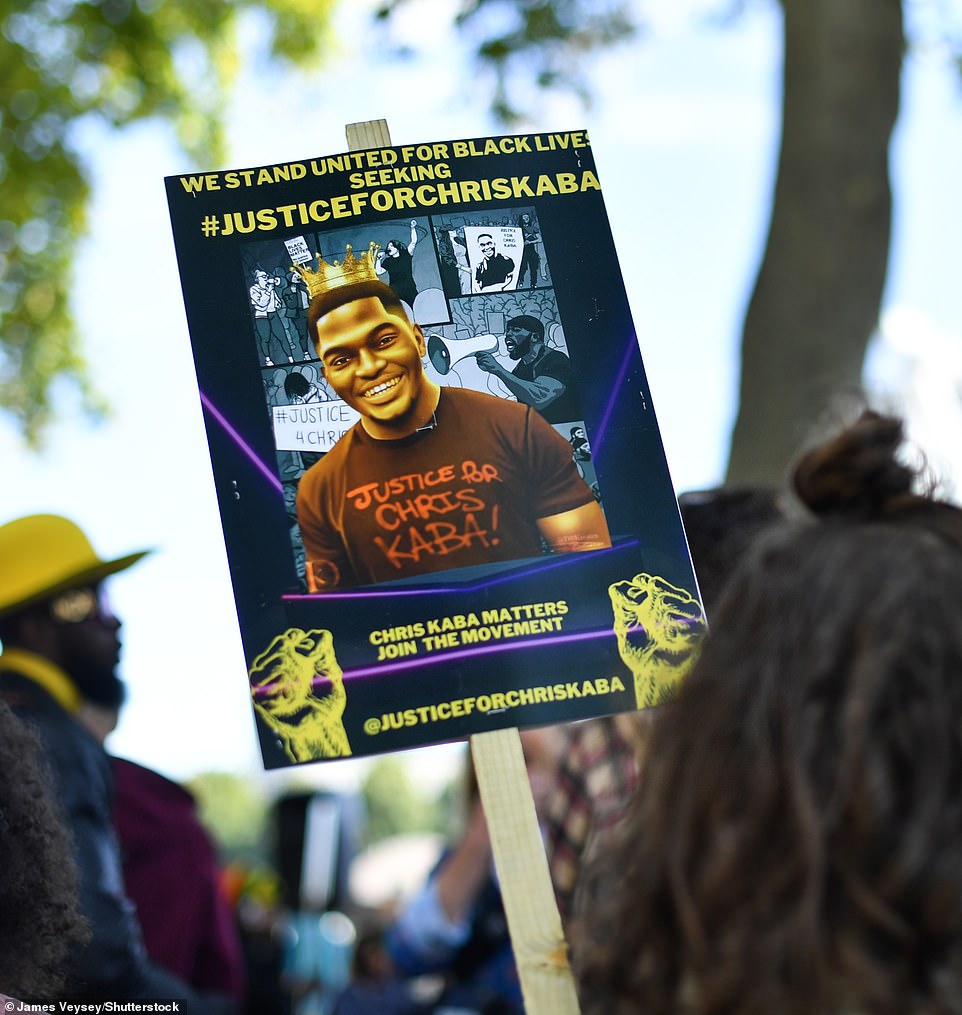 Mr Kaba’s parents couldn’t make Saturday’s event because ’emotionally it was too much for them,’ his cousin alleged. However, the family member noted they sent a ‘message of thank you.’ 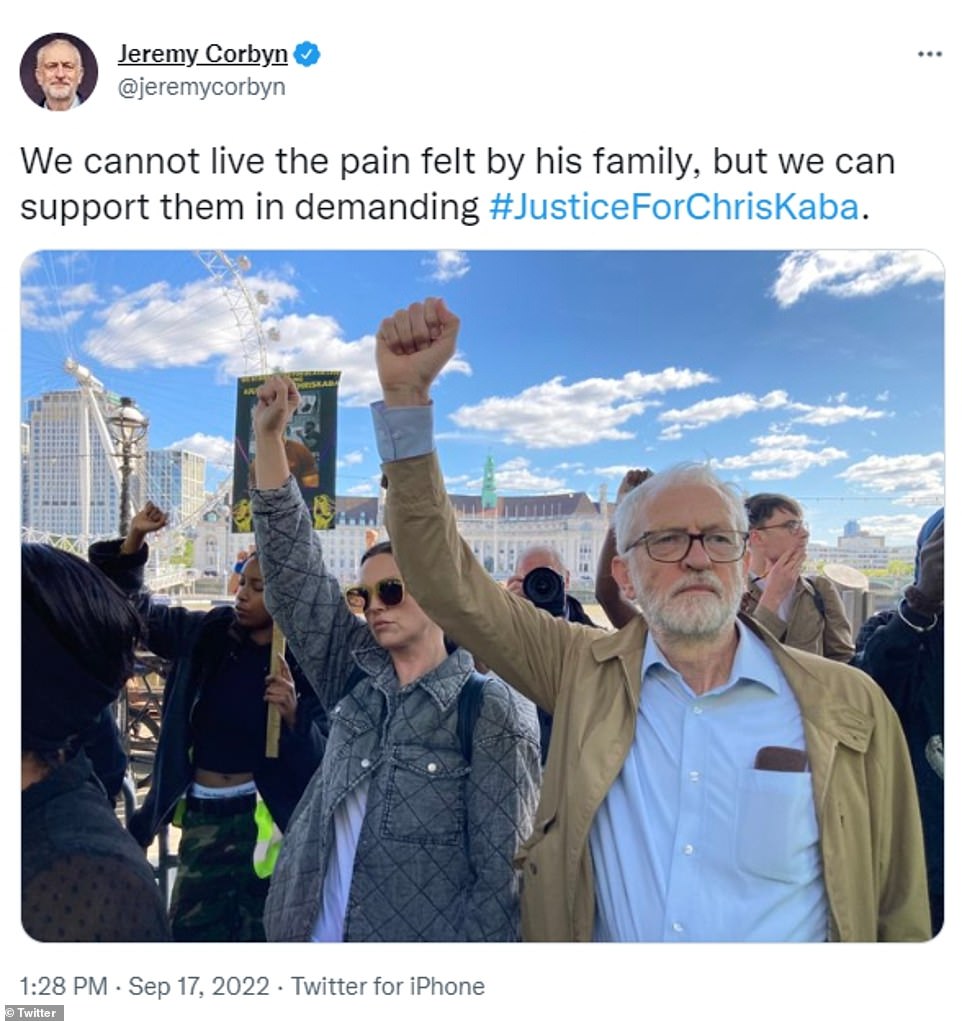 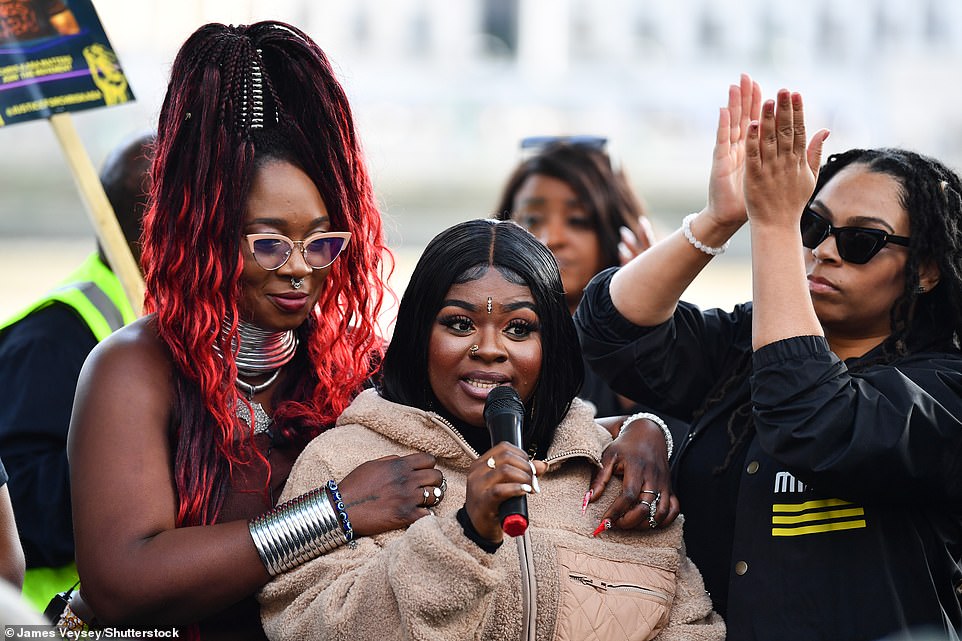 The crowd cheered as Mr Kaba’s cousin voiced the family’s demands: ‘The suspended officer must be interviewed under caution without delay and keep family informed of this. There should be a charging decision within weeks and not months. So, this is our demand. Hopefully we get somewhere within this week’ 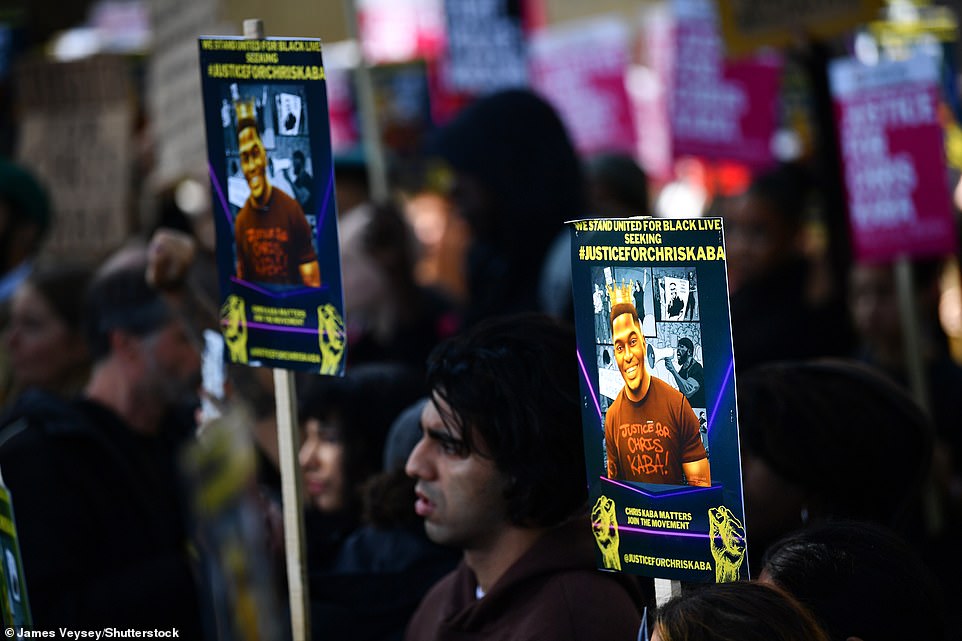 Mr Kaba, who was about to become a father, was killed on September 5 following a police pursuit of his car which ended in Streatham Hill, south London.

His Audi was hemmed in by two police vehicles in Kirkstall Gardens, a narrow residential street, and one round was fired from a police weapon.

The Metropolitan Police officer involved has been suspended by the force and an inquest into Mr Kaba’s death will be opened on October 4.

IOPC Regional Director Sal Naseem told Mail Online on Friday that the watchdog has been in contact with Mr Kaba’s family regarding the investigation, which is expected to take between six and nine months.

He said: ‘We fully appreciate that Chris Kaba’s devastated family and the community have a lot of unanswered questions about his death.

‘We have been in further contact with Chris’s family this week to answer a number of questions they have and to offer them privately and confidentially the opportunity to view video footage as soon as it is practicable.

‘We have also advised Chris’s family that we aim to complete our investigation within six to nine months.

‘We understand that people want answers quickly, but this is a complex investigation involving a significant amount of evidence. 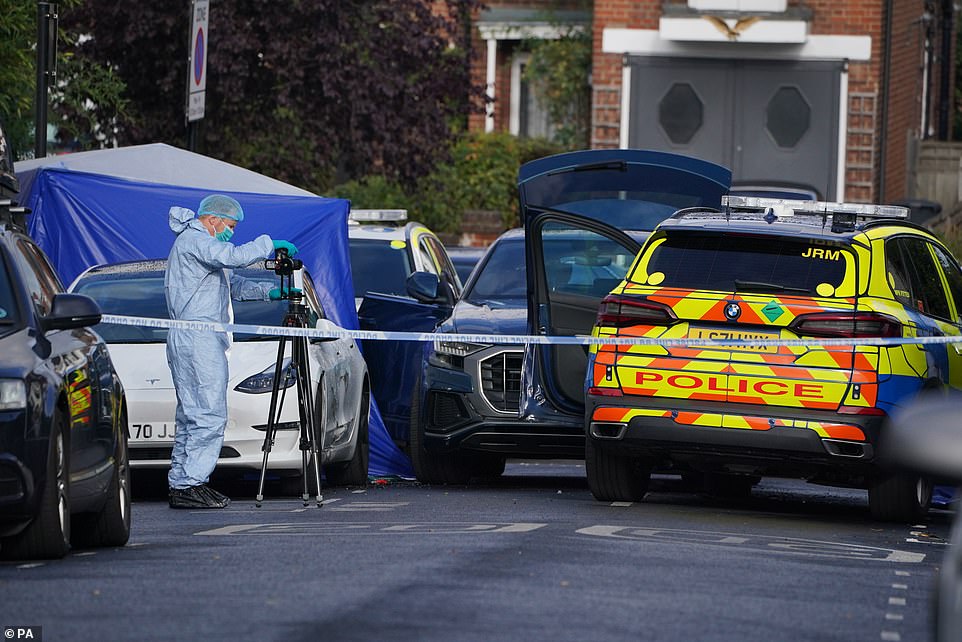 ‘There are a number of inquiries to carry out over the coming weeks and months, including expert analysis, and it is important that we allow our investigation to run its course as we seek to establish all of the facts.’

She said: ‘We continue to fully support the IOPC investigation as they work to establish the facts and try to answer the many questions Mr Kaba’s family and others have around his tragic death.

‘We’ve been spending this week speaking with local communities across London, including our Independent Advisory Groups – we know how important it is we listen to their views and concerns and explain as far as we can what is happening. We welcome more of these important conversations.’

The Metropolitan Black Police Association (Met BPA) offered condolences to Mr Kaba’s family and said it supported the responses of the IOPC and the Met to the incident so far.

Speaking about the public response to the incident, a spokesperson for the group added: ‘There has been a legitimate and powerful show of community strength and unity.

‘While heartening to see, it comes yet again through evident pain and frustration.

‘This incident comes at a critical time when the MPS remains in special measures over a string of high profile and appalling incidents and are signed up to the Race Action Plan, which commits to fair treatment and anti-racism in policing.

‘Therefore, it is vitally important these commitments manifest themselves in sensitive and meaningful engagement in the community, timely information and responsive support to the Kaba family.

‘The Met BPA continue to be vocal as a critical friend to the Metropolitan Police and in support of London’s community.’ 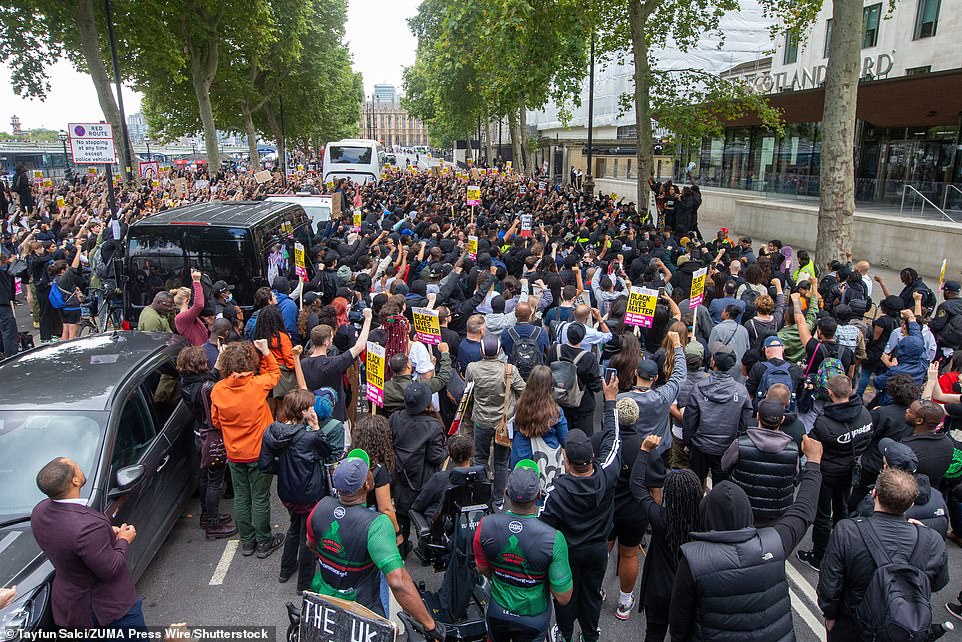 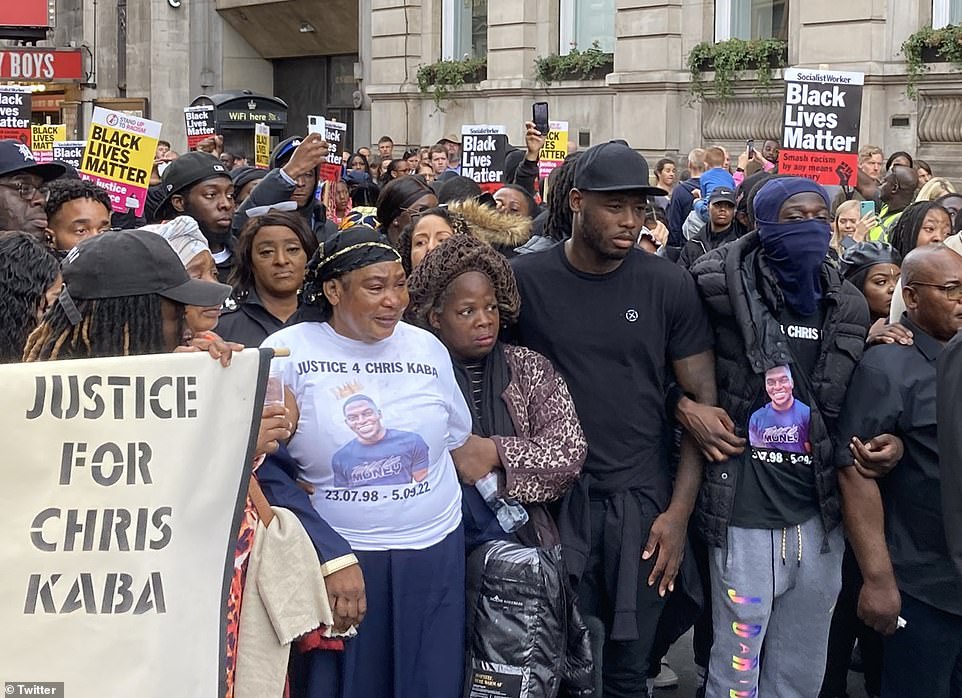 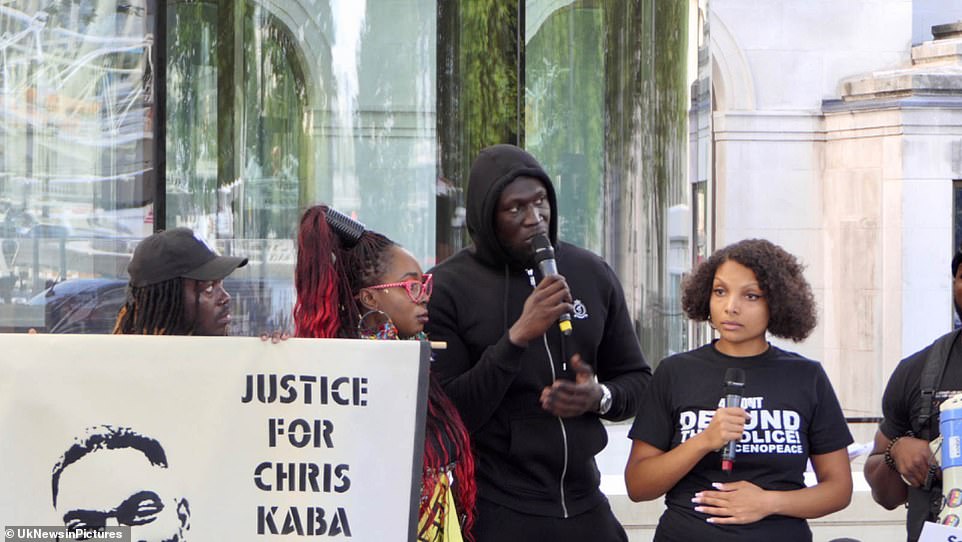 ‘I encourage everyone to strive for stamina. Nobody should be able to go on like this,’ rapper Stormzy (pictured) told last weekend’s crowd. ‘They were responsible for the death of someone’

Mr Kaba’s death has prompted several protests across London, including one led last week by his grieving mother Helen Nkama, which saw an estimated 4,000 to 5,000 demonstrators.

Crowds marching to Scotland Yard last Saturday paid tribute to Mr Kaba with signs reading ‘Black Lives Matter’, ‘Justice for Chris Kaba’ and ‘Abolish the Met’ were held up as speakers using a megaphone led chants of ‘no justice, no peace’ and ‘police are the murderers.’

‘I encourage everyone to strive for stamina. Nobody should be able to go on like this,’ he said. ‘They were responsible for the death of someone.

‘That is [possibly] murder. It could have been either a brother or a nephew.’

Fellow Wretch 32, another British rapper, was also present for the rally. He was part of a small group standing on a raised platform, passing around a microphone and leading chants.

He stated: ‘Why is our law superior to the law? Without justice, there is no peace.’