Wide load! Cyclist pedals along a London road balancing a 6ft SOFA on his bike

A cyclist astounded drivers as he cycled past them transporting a six-foot-wide sofa on the front of his bike on a main road in London.

Construction worker Gary Pedder, 37, was out shopping on Tuesday afternoon when he noticed the red-headed rider on the A1000 in Finchley, north London, and filmed the unusual sight.

The cyclist calmly travels along with the three-seater balanced on the front of what appears to be a fuschia-pink cargo bike secured by some ‘bits of rope’. 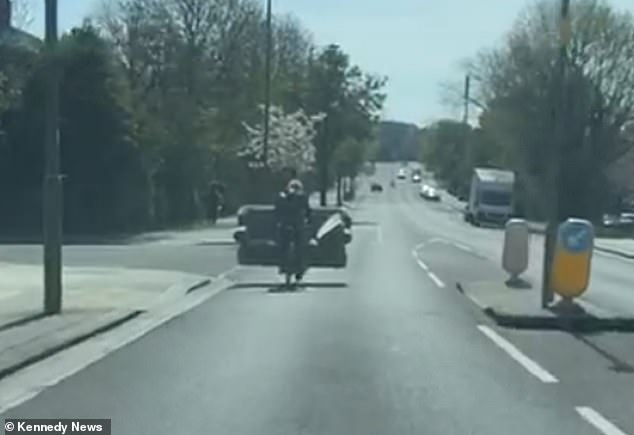 On his way to the supermarket Gary Pedder spotted a red-headed man transporting a three-seater sofa on what appears to be a cargo bike in Finchley, north London

While listening to Greenday’s hit song American Idiot, a shocked Mr Pedder says: ‘What the f**k am I looking at? Can anyone else see this?’

He drives past the cyclist who seems blissfully unaware people are confused by his antics.

Mr Pedder, from Barnet, London, said: ‘We were astounded by it – I think my reaction on the video shows that. 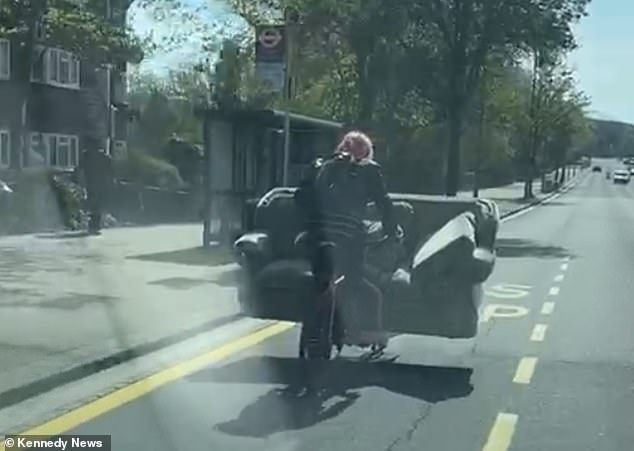 ‘I was shocked. The man was acting like it was an everyday thing to do – as if it was the most normal thing ever.

‘I have no idea why he was doing it but it was hilarious at the time. Maybe he couldn’t get a removal van.

‘The sofa did not look sturdy at all – it was wobbling and all over the place. Usually that road would be packed with cars. 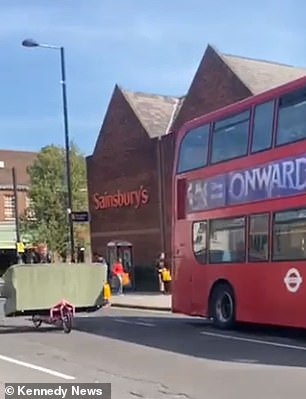 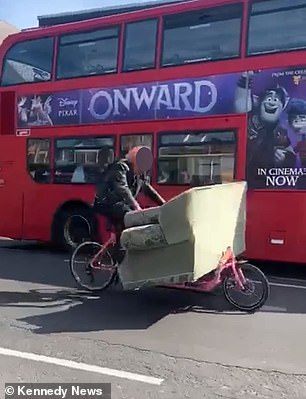 ‘It was only attached by bits of rope at the front and it was a three-seater. I’d say it was about 6ft wide.’ 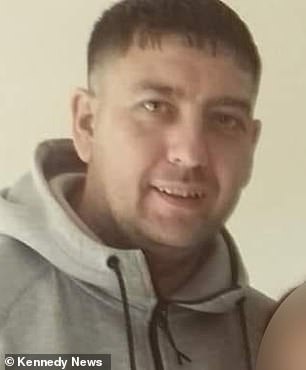 Construction worker, Gary Pedder, 37, from Barnet, London, spotted the cyclist last Tuesday while he was out shipping

Mr Pedder went into the supermarket to do his shopping for at least 30 minutes and in the time he had been in there the bold biker had caught up with him – cycling the lengthy route three-mile stretch with the furniture still attached.

He said: ‘At first we didn’t realise it was a sofa but when we noticed I grabbed the phone.

‘He must have been quite fit and athletic, peddling along with a sofa on the front of his bike.

‘We saw him a while later when we were coming on the way back from shopping. He definitely looked more tired out when we saw him the second time.

‘He was outside Sainsbury’s about three miles up to road.

‘We’d done our shopping, come out and he was heading towards central London.

‘Everyone who has seen the video was shocked by it.’