Washington: President Joe Biden and congressional Democrats proposed a major immigration overhaul on Thursday, local time, that would offer an eight-year pathway to citizenship to the estimated 11 million people living in the US illegally.

The legislation reflects the broad priorities for immigration changes that Biden laid out on his first day in office, including an increase in visas, more money to process asylum applications and new technology at the southern border. 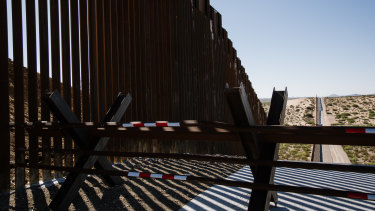 It would be a sharp reversal of Trump administration policies, and parts are likely to face opposition from a number of Republicans. Biden has acknowledged he might accept a more-piecemeal approach if separate major elements could be approved.

“We have an economic and moral imperative to pass big, bold and inclusive immigration reform,” said New Jersey Democratic Senator Bob Menendez, one of the lead sponsors of the bill, in unveiling it Thursday.

Menendez said Democrats have failed in the past because they have too quickly given in “to fringe voices who have refused to accept the humanity and contributions of immigrants to our country and dismiss everything, no matter how significant it is in terms of the national security, as amnesty.”

Separately, enforcement guidelines released Thursday by the new administration would target immigration enforcement more directly at people in the country illegally who pose a threat. That, too, would be a reversal from the broader targeting policy of the Customs and Immigration Enforcement under Trump.

The major immigration overhaul legislation would offer one of the fastest pathways to citizenship of any proposed measure in recent years, but it would do so without offering any enhanced border security, which past immigration negotiations have used as a way to win Republican votes. Without enhanced security, it faces tough odds in a closely divided Congress.

Menendez said he had been speaking to Republican colleagues in an effort toward “putting the pieces of a puzzle together” on a bill that would receive enough votes to pass. He acknowledged the final product is likely to change significantly. But he also suggested that elements of the proposal could be included through a parliamentary manoeuvre in a budget bill that would only require 51 votes.

The bill Democrats introduced on Thursday would immediately provide green cards to farm workers, immigrants with temporary protected status and young people who arrived in the US illegally as children. For others living in the US as of January 1, 2021, the plan establishes a five-year path to temporary legal status. If they pass background checks, pay taxes and fulfil other basic requirements, then, after three years, they can pursue citizenship.

The plan also would raise the current per-country caps for family and employment-based immigrant visas. It would eliminate the penalty barring those immigrants who live in the US without authorisation and who then leave the country from returning for three to 10 years. It also would provide resources for more judges, support staff and technology to address the backlog in processing asylum seekers.

The bill would expand transnational anti-drug task forces in Central America and enhance technology at the border. And it would set up refugee processing in Central America, to try to prevent some of the immigrant caravans that have overwhelmed border security in recent years.

The plan includes $US4 billion spread over four years to try to boost economic development and tackle corruption in Latin American countries, to lessen pressure for migration to the US.

“Our border policy is broken, period,” Sanchez said. “But this bill employs a multipronged approach that will manage the border, address the root causes of migration crack down on bad actors and create safe and legal channels for those who are seeking protection.”

Comprehensive immigration legislation has struggled to gain traction in Congress for decades.