More than 100 people have been evacuated from the University of Melbourne after a chemical spill at a research laboratory.

An Ambulance Victoria spokeswoman said no one had been treated for injuries or taken to hospital, but paramedics were on standby. 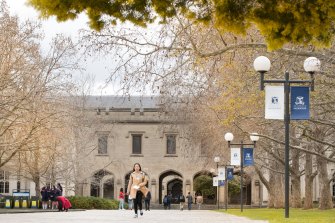 About 100 people have been evacuated from the University of Melbourne after a chemical spill.Credit:Simon Schluter

A Fire Rescue Victoria spokeswoman said about 20 firefighters, including specialist hazmat officers, were called to Grattan Street, Carlton, at about 12.15 on Tuesday and have brought the scene under control.

"Firefighters arrived on scene in six minutes and worked with FRV Scientific Officers to contain the spillage and make the scene safe," the spokeswoman said.

"FRV crews are working alongside Victoria Police and Ambulance Victoria at the scene."

The university declined to comment until it had more information.