Rising numbers of Victorians infected with COVID-19 are arriving in Melbourne’s understaffed emergency departments at the same time as the annual surge of summer trauma patients, and the situation is forecast to worsen in the coming days.

Two epidemiologists have said they believe Victoria and NSW could be heading into another lockdown without stronger measures to limit rapidly rising case numbers, and Victorian Health Minister Martin Foley said the peak of infections in the Omicron wave could be worse than initial forecasts.

On Monday, people were warned not to visit major emergency departments in Melbourne’s west “unless absolutely necessary” because of extreme pressure on the units at Sunshine, Footscray and Williamstown hospitals.

The problem has been caused by significant staff shortages as hundreds of healthcare workers try to take annual leave after another gruelling year while others are in isolation because of COVID-19 exposure.

Increasing numbers of mildly ill people are also attempting to access COVID-19 tests in hospital emergency departments alongside the annual rise in patients needing urgent care during the holiday period and a reduced number of beds due to understaffing.

Front-line doctors warn similar trends are being seen at every hospital in Melbourne. 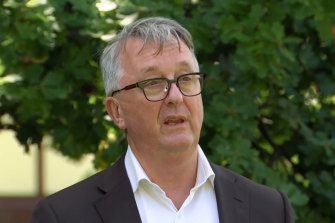 “I’ve got real trepidations about what next week will look like,” senior emergency doctor Stephen Parnis said. “Our resources are under challenge in a different way to all the previous waves of coronavirus.”

Victoria’s COVID-19 response commander, Jeroen Weimar, has warned that the number of people hospitalised with the virus, now at 491, was expected to increase “quite rapidly” in the coming days.

Victoria recorded another record day of 8577 daily cases on Monday; almost one in five people taking a PCR test are getting a positive result. Of the people in hospital, 56 were active cases in intensive care, 24 of whom were on ventilators. There were 48 people in intensive care having had COVID-19 but who were no longer classed as active cases.

Mr Foley said authorities expected COVID-19 case numbers to increase exponentially. He warned that modelling discussed at national cabinet in December which predicted 200,000 cases a day in Australia by late January or early February, without low or medium restrictions, could even be “conservative in terms of the infectivity rates that we’re starting to see with Omicron”.

He was “very concerned that all of our emergency departments are facing unprecedented demand that grows every day in the face of this global pandemic”.

The head of Monash University’s epidemiological modelling unit, James Trauer, believes Victoria and NSW are heading towards another lockdown.

He said the Australian Open was no longer safe to go ahead at full crowd capacity, and much more needed to be done to bring the Omicron wave under control, including distributing high-quality masks to the public and better targeting those over 70 for their third vaccine dose.

“There is still a lot more we can do before we pull out the lockdown card … but it looks like we are heading in that direction,” he said.

Associate Professor Trauer said that due to a lag between people testing positive and falling sick, Victoria was already locked into “much higher” numbers of COVID-19 patients in hospital, even if the outbreak started to abate soon.

“The notification numbers that we see are the best way of getting a sense of where the epidemic’s going. Even when we have problems with testing … you get a sense of whether we have things under control or we don’t. And clearly, we don’t.”

Patients in NSW with COVID-19 have surpassed 1200, nearing parity with the peak of the earlier Delta wave. But NSW Health Minister Brad Hazzard said that data might overstate the rate of illness because it included people with COVID-19 who had been admitted to hospital for other reasons, including births and heart attacks.

The hospital data could be similarly misleading in Victoria, with Mr Foley confirming that someone admitted for a car accident or cancer treatment, for example, would also be reported as a COVID-19 hospital case if they tested positive.

Deakin University epidemiology chair Catherine Bennett said these cases were still an impost on the hospital system because of the infection-control measures required, but she argued such cases were not a justification for COVID-19 shutdowns.

On Monday, the Victorian government moved to reduce the number of healthcare workers deemed close contacts, social or workplace contacts – currently sitting at 1700 – by allowing them to continue to work if they cleared daily rapid tests and showed no symptoms.

Nancy Baxter, head of the Melbourne School of Population and Global Health, said if hospitals were overwhelmed in NSW and Victoria, another lockdown could not be ruled out.

Australasian College for Emergency Medicine Victorian chair Mya Cubitt said emergency clinicians were dealing with the twofold blow of a surge in people requiring urgent care over the traditionally busy summer period as well as rising numbers of COVID-positive patients, including “significant numbers” of people with COVID-19 who require medical attention but do not need admission.

She stressed that this was a gap in the healthcare system that must be addressed.

“It is very important that this significant cohort of patients, and the resources required to provide appropriate care, are factored into ongoing healthcare system planning and responses to COVID-19,” she said.

The director of emergency medicine at Royal Melbourne Hospital, Associate Professor Mark Putland, said about 30 people infected with coronavirus were arriving in the hospital’s emergency department every day, up from just five a day during a short lull in September and October.

“Now, the number of people we are seeing with coronavirus each day is just going up and up,” he said.

Among them were a growing number of vaccinated people with flu-like symptoms who were coming to the emergency department after returning a positive result to COVID-19 on a rapid antigen test at home and were not sick enough to require admission.

Associate Professor Putland estimated only about a quarter of people arriving at the Royal Melbourne Hospital emergency department with the virus were being admitted at present, compared with about half at the height of the Delta wave last year, when vaccination rates were still lagging.

Now, the vast majority of those admitted were being sent to general coronavirus wards rather than intensive care units.

But emergency doctor Stephen Parnis said some people were arriving at emergency departments with the coronavirus as well as chronic and serious health issues that had been exacerbated by the virus, including worsening heart or kidney failure and diabetes.

He said that on top of a surge of coronavirus patients, emergency doctors were seeing increasing numbers of trauma or alcohol-related injuries including a rise in assaults.

Some emergency departments had been unable to open their short-stay units (wards used for people requiring urgent medical care and brief hospitalisation) for almost a week now because there were not enough nursing staff rostered on, Dr Parnis said.

He also had concerns about delays in people infected with coronavirus being able to be tested in a timely manner around the state.

Professor Putland urged anyone who returned a positive rapid antigen test at home to self-assess before going to hospital.

“If you are finding it difficult to stand up or walk or breathe on your own or you’re looking at a relative and they are breathing really heavily, then do not delay seeking help,” he said.