Anger is growing in Melbourne's booming west with reassurances being sought from the Victorian government that one of its key election promises – the Western Rail Plan – has not been shelved.

Councils, academics and the state opposition have called on the government to prioritise electrifying rail lines to Melton and Wyndham Vale. 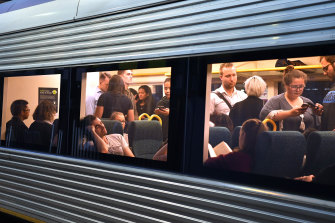 Commuters have to rely on infrequent and crowded V/Line trainsCredit:Joe Armao

They fear that funding announced for other infrastructure projects in Tuesday's budget showed where the government's priorities lie, with one expert saying new electric trains to the western suburbs were now "clearly donkey's years away".

Desperately needed rail upgrades were promised by Premier Daniel Andrews on the eve of the 2018 state election, which Labor won in a landslide taking all of the seats in Melbourne's west.

Tuesday's budget included massive expenditure on other rail infrastructure including $2.2 billion for the Suburban Rail Loop, $2 billion for Geelong Fast Rail and $1.248 billion for 100 new trams but there was no funding boost for the Western Rail Plan, raising concerns it has been put on the back burner.

Commuters in the west rely on a V/Line service which runs every 20 minutes in peak periods and was, before the COVID-19 pandemic hit, often unreliable and chronically crowded.

Under the Western Rail Plan, the V/Line and Metro train tracks would be separated and new electrified lines built enabling larger, faster trains to run from the city to Wyndham Vale and Melton.

Last year the government set aside $100 million for the planning and design works but allocated no new money for key elements of the project in the 2020/21 state budget.

A further $30 million was tipped into the project by the Commonwealth this year but neither the state nor federal governments have mentioned the Western Rail Plan in press releases for more than a year.

The proposed upgrades – which were intended to be planned alongside the airport rail link – also did not feature in public statements about the new line to Tullamarine which was announced by the Premier and Prime Minister Scott Morrison at the weekend.

Melton Council says residential estates are being built in six new suburbs directly aligned to the rail line and will bring an extra 183,500 residents within the rail line’s catchment.

The council is calling for electrification to be done by 2025 with Infrastructure Australia predicting that demand for Melton trains will grow three-fold by 2031.

"We’d like reassurance that these projects will not come at a cost to providing additional and much-needed metropolitan rail services to Melton.”

Cr Hegedich said while the money for Geelong Fast Rail was welcome, “we need assurance that the additional capacity that the Wyndham community will need will be catered for through the Western Rail Plan as a priority”.

The $2 billion the government set aside for the first stage of Geelong Fast Rail would see Geelong lines run on new express tracks between Werribee and Laverton, creating capacity for an extra three peak hour trains to run via Wyndham Vale.

No new funding was set aside for electrification and new tracks between the city and Sunshine –which would have opened up more capacity for electric trains to Melton and Wyndham Vale – have been ruled out of the plans for the Airport Rail Link.

A government spokesperson said the $2 billion it invested in Geelong Fast Rail was delivering on key objectives of the Western Rail Plan.

“The Western Rail Plan clearly outlined Geelong Fast Rail as its first priority – the plan is only possible once you get the Geelong project underway."

Rail Futures Institute’s secretary John Hearsch said the electrification works were a greater priority than Geelong fast rail and the government’s argument that those improvement needed to be done first meant electrification was “clearly donkey's years” away.

“We’d always assumed the opposite – that electrification to Melton and Wyndham Vale would be done before the Metro Tunnel opens in 2025,” he said.

Swinburne University’s director of urban design Ian Woodcock said it was "very disappointing" the Western Rail Plan did not get extra funding in the budget. COVID-19 may have moderately slowed population growth he said but "we were playing catch up anyway" with upgraded rail services.

“This is sorely needed given the huge population growth that has occurred in the Melton and Wyndham Vale corridors … this could have been proceeded with quickly, instead the government seems intent on a focusing on long-term grandiose proposals that will take many years to deliver.”