The former head of one of China’s largest state-controlled asset management firms was sentenced to death Tuesday for soliciting £204 million in bribes, corruption, and also bigamy.

Lai Xiaomin, a former Communist Party member, gave a detailed televised confession on state broadcaster CCTV last January, which showed footage of safes and cabinets stuffed with cash in a Beijing apartment allegedly belonging to him.

Lai, 58, had abused his position in attempting to obtain the vast sum, a court in the northern city of Tianjin said, describing the bribes as ‘extremely large’ and labelling the circumstances ‘particularly serious’.

He had shown ‘extreme malicious intent,’ the court ruling added. 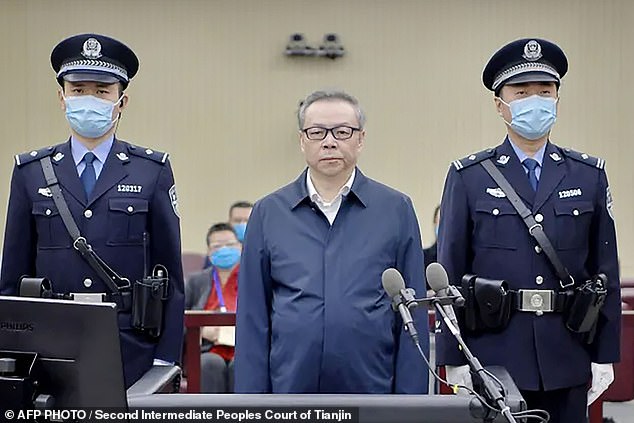 Lai Xiaomin, the former head of one of China’s largest state-controlled asset management firms was sentenced to death Tuesday for soliciting £204 million in bribes, corruption, and also bigamy

The former chairman of the Hong Kong-listed China Huarong Asset Management Company – a distressed debt group – was also found guilty of bigamy after living with a woman ‘as man and wife for long periods’ outside of his marriage and fathering illegitimate children.

Lai’s death sentence is one of the harshest punishments for economic crimes in recent years.

Life sentences and suspended death sentences commuted to life after two years are frequently handed down in corruption cases, but death sentences without the chance of reprieve have become rare in recent years. Such sentences automatically go on appeal to China’s highest court.

Huarong is one of four companies set up in 1999 to help clean up bad debt piles choking China’s banking system, and the company later expanded into investment, loan and property businesses. 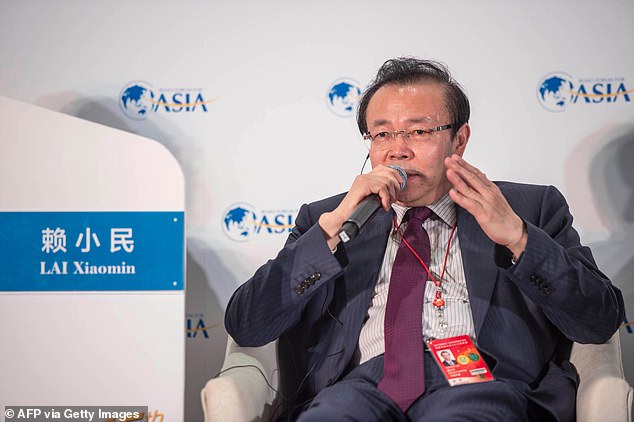 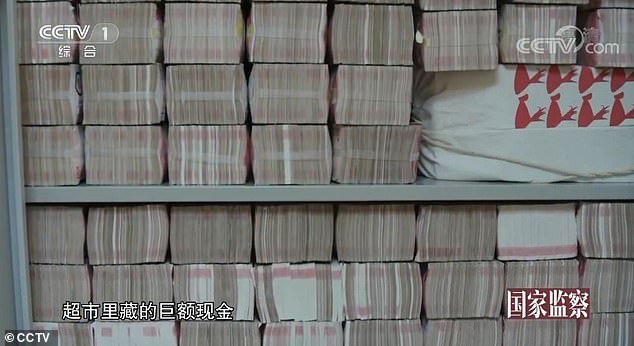 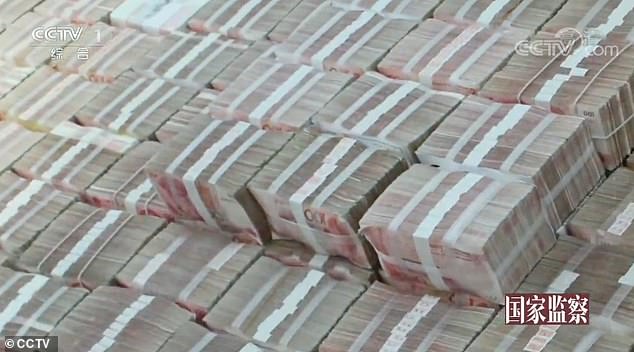 Lai’s downfall began in April 2018 as he was placed under investigation by the ruling Communist Party’s corruption watchdog in 2018 and expelled from the party later the same year.

In its ruling, the Tianjin court cited the ‘especially enormous’ size of the bribes Lai accepted, saying they exceeded 600 million yuan (£68 million) in one instance.

In total, it said Lai collected or sought to collect 1.79 billion yuan (£204 million) over a decade in exchange for making investments, offering construction contracts, helping with promotions and other favours.

He was also convicted of embezzling more than 25 million yuan (£2.8 million) in state assets and starting a second family while still married to his first wife.

Although Lai provided useful details about offences by his subordinates, the seriousness of his bribe taking and ‘degree of harm caused to society’ were not enough to win him leniency, the court said in its ruling.

‘Lai Xiaomin is lawless and greedy in the extreme,’ the ruling said. ‘His crimes are extremely serious and must be punished severely under law.’ 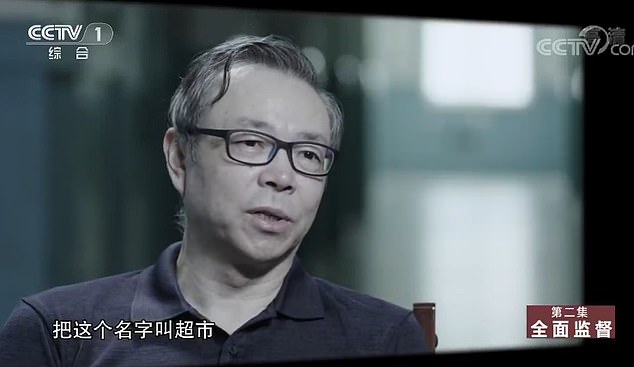 During his TV confession, Lai said he ‘did not spend a single penny, and just kept it there… I did not dare to spend it.’

Safes and suitcases stuffed with suspected bribery money were reportedly discovered when authorities raided the apartment of Lai Xiaomin in Beijing.

He had referred to the apartment where he kept the money as the ‘supermarket’, given his regular visits there to deposit cash.

CCTV showed luxury cars and gold bars reportedly accepted as bribes by Lai, who worked in the central bank and the China Banking Regulatory Commission prior to his leadership roles in Huarong. 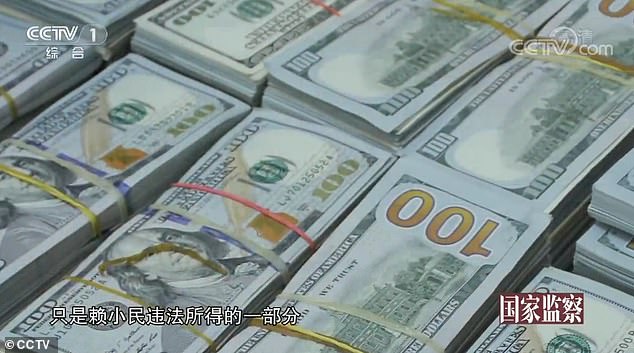 The report showed that Mr Lai had taken bribes in different currencies, including US dollar

The channel often broadcasts interviews with suspects admitting to crimes before they have appeared in court – a practice that has long been condemned by lawyers and rights organisations as forcing confessions under duress.

The court said Lai would have all personal assets confiscated and be stripped of his political rights.

Photos published by the court showed Lai standing up and facing the judge to be sentenced, flanked by two police officers wearing face masks.

The sentencing brings an end to one of the country’s biggest financial crime cases, and comes as Beijing takes an increasingly tough stance on corporate wrongdoing.

‘The severe treatment of Lai Xiaomin reflects the strong determination of the Central Committee with President Xi Jinping as the core to administer the party and its zero tolerance in punishing corruption,’ the company said in a statement. 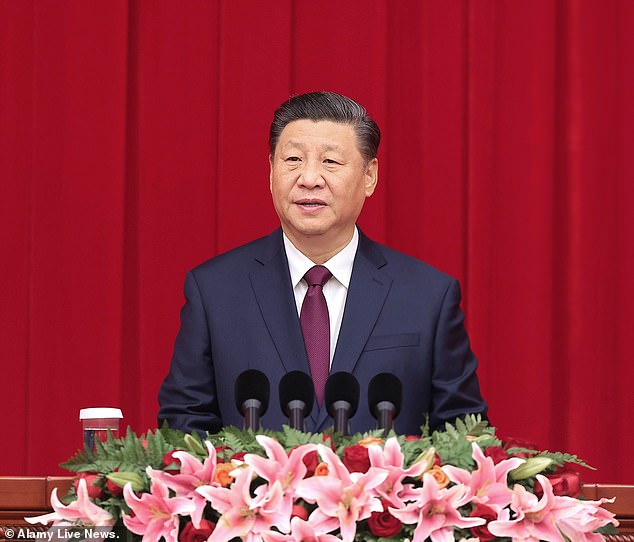 Since President Xi Jinping came to power, many high ranking officials have been jailed

Critics say the wide-ranging anti-corruption campaign launched under President Xi Jinping has also served as a way to target his opponents and those of the Communist Party leadership.

Since Xi came to power, many high ranking officials have been jailed, although only one is known to have been executed – Zhao Liping, who was convicted of homicide in 2016.

China keeps data on its use of the death penalty secret, although rights group Amnesty International estimates the country is the top executioner globally – with thousands executed and sentenced to death each year.

Three other senior Communist Party members have been sentenced to death but later given a reprieve.

The former head of Interpol, an ex-spy chief and a Xinjiang governor accused of ‘trading power for sex’ are some of the other high-profile officials to suffer spectacular falls from grace in recent years in the anti-corruption purge.