A father-of-seven has died after contracting coronavirus but only five of his family were allowed to attend his funeral. 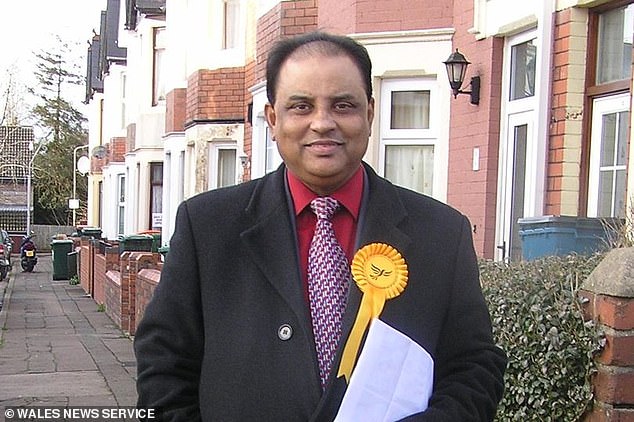 But only five people were allowed at the funeral held on April 23, the day after he died in hospital

Kamal said: ‘It was difficult. If it wasn’t for coronavirus thousands of people would have been there.’

The family chose Kamal to be joined by two brothers Malek and Rizwan, his cousin and his father’s brother in law – along with an imam from the mosque.

The former Liberal Democrat councillor had tested positive for Covid-19 after being admitted to hospital on April 6.

Mr Hussain was a well-known businessman, owning a number of restaurants before giving up his restaurants to focus on his work as a Newport city councillor.

Son Kamal said: ‘He was liked by everyone, he left a good impression with anyone he spoke to and was always sharing his knowledge to family and friends.

‘He suffered from bad asthma; he was having problems with his lungs and finding it hard to breathe. 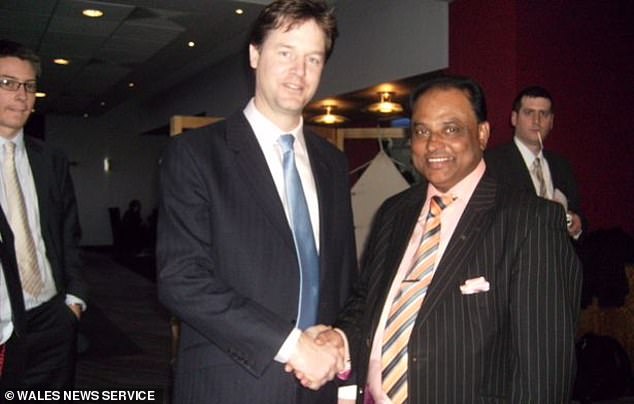 The former Liberal Democrat councillor, pictured with Nick Clegg, was only allowed five mourners at his funeral

‘He was at home resting, he’d stopped working, and then he deteriorated and was taken to hospital on April 6.

‘They tested him for coronavirus and he had it.’

Mr Hussain, of Newport, South Wales, died at the Royal Gwent Hospital – in one of the country’s worst hotspots for the virus.

Kamal added: ‘He was a family orientated man, but he also had a lot of time for his community and he dedicated time to his charities.

‘He had a lot of businesses, but he used to make sure he had enough time to do charity work and help youngsters.

‘For him it was all about helping the next generation and hoping they have the best things and that they have opportunities.

‘He came from a small village in Bangladesh – it was a tight-knit community where everyone looks after each other.

‘When he came to Britain, he appreciated his life had changed and he was quite fortunate.

‘He was the first elected Bangladeshi city councillor in Newport – it made him very proud. It’s something I’m very proud of.’

What are the rules on attending funerals?

Public Health England has issued guidelines for the management of safe funerals during the coronavirus pandemic.

Health chiefs also instructed that the only people who should attend funerals are: members of the deceased person’s household; close family members or if they cannot attend, close friends; a celebrant of choice if the bereaved have requested it.

No specific number of attendees has been set by the Government but venue managers can impose limits on the maximum number of people attending.