The majority of cases in South Australia's coronavirus cluster are asymptomatic, the state's Premier Steven Marshall has revealed.

South Australians woke up to their first day of a harsh six-day lockdown which prevents residents from leaving their homes for anything but essential services, grocery shopping and medical attention. 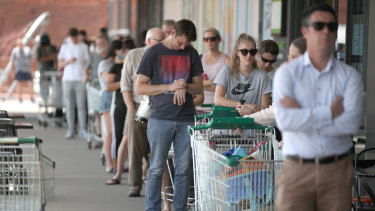 People queuing outside a Woolworths supermarket at West Torrens in Adelaide after the lockdown was announced.Credit:Getty

Mr Marshall said it was clear he needed to pull the trigger on a hard six-day lockdown after his public health team told him on Wednesday, "don't deliberate, we only have one chance".

"This circuit-breaker is so important for us to get ahead of the game," he said.

There have been reports that tourists from South Australia streamed over interstate borders before the lockdown came into effect at midnight on Wednesday.

Michael McIvor, the operator of Broken Hill Tourist Park in NSW, said his business went from 50 bookings to over 400 from Wednesday morning to Wednesday night due to the influx of South Australians.

"The phones were ringing red hot, we had four lines coming in at once," he told ABC Radio.

Mr McIvor said he had more demand than accommodation available, but tried to help as many people as he could.

"We were pulling out linen and blankets so they could sleep in their cars and have a shower in the toilet blocks."

When announcing the six-day lockdown, South Australian Chief Medical Officer Professor Nicola Spurrier told reporters the strain of COVID-19 appeared to have a "very, very short incubation period" with those infected showing symptoms of the virus within 24 hours of exposure.

Some experts have raised questions about whether a six-day lockdown will be sufficient to stem the outbreak.

"I think it's slightly on the short side to be perfectly honest," said Dean of Health at Melbourne's Swinburne University, Dr Bruce Thompson.

"If you’re only aiming for one incubation period you’re losing your margin for error," he told Melbourne radio station 3AW.

Professor Mary-Louise McLaws, an epidemiologist with the University of New South Wales, also cast doubt on the theory of a new strain and said it was unlikely "the pathogenicity or the infectivity of the virus had changed".

"The ability for patients to become infectious early on is nothing new, we have known this since about April, when the World Health organisation wrote in one of their updates that they are now seeing people becoming infectious at least by day three," she said.

The restrictions in South Australia are harsher than those implemented during Victoria's second coronavirus wave, which reached more than 700 cases a day at its peak.

Residents across South Australia are unable to leave their homes even for exercise. All schools, universities, factories and construction sites are closed.

The Australian Funeral Directors Association has raised alarm at the lockdown measures which also prevent any funerals until next Tuesday.

President of the association Andrew Pinder said the funeral shutdown was drastic and out of step with lockdowns in other states, where funerals were able to go ahead with small numbers of people.

"We are not unsympathetic to the present COVID-19 outbreak … but denying even limited, socially distant funerals is a step entirely too far," he said.

Mr Pinder also warned that the industry may run out of room for bodies if the ban on funerals continues for more than six days.

"Storage space for bodies is not unlimited and if funerals are banned for more than six
days plans for emergency storage will need to be implemented.

"Similarly, if coffin manufacturing is not allowed to keep pace with the number of deaths there will be further delays in funerals, not to mention the obvious health and general hygiene consequences."

But Prime Minister Scott Morrison said he believed the lockdown would last days, not weeks.

"When the Victorian lockdown was put in, I understood that as well. So I’ve taken a very consistent approach in respecting the decisions of the states," he said.

Mr Morrison said he remains "hopeful and ambitious" that state border restrictions will lift in time for Christmas.