London’s streets of rage: Horrifying gang war is caught on dashcam as rival thugs with machetes burst from cars after crash in Edgeware Road – as man shot in head in Islington sparks capital’s 101st murder probe of 2020

Rival gangs with yobs wielding zombie knives and machetes clashed in a street fight which was caught on a dashcam.

It comes as police launched a murder investigation after a man was found shot in the head on Sunday.

The 30-year-old victim’s death marks the 101st murder on the streets of London this year.

His death comes as footage emerged of rival gangs clashing on London’s streets over the Halloween weekend.

Dashcam footage which captured the street fight saw two cars filled with thugs crash into another car on Edgeware Road.

The driver of one vehicle narrowly missed being hit as streams of hooded figures are seen exiting the car and running from the scene.

Once can be seen holding a large machete as they run past the camera.

It hit an Uber and at least four other parked cars. Passengers in the hire car can be head directing the driver to reverse the car away from danger.

The gang members then ran off leaving the scene near Edgware Road, central London in the early hours of Sunday morning.

Locals spoke of their shock at the scenes.

The cars crashed on Edgeware Road in London, with dashcam footage capturing the episode on film 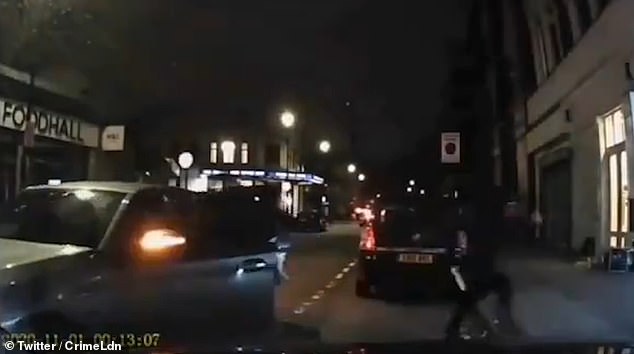 One man, pictured right, can be seen with a long machete-like blade in his hand as he flees the car and runs from the scene of the crash

Another – called Paul – said: ‘These boys just need a nice community centre to attend and sort all their issues out across a good old game of chess.’

Their comments come after a man who was shot in the head on Sunday was declared dead at the scene.’

It is the latest in a surge of violent crimes in the capital over the course of the last 12 months.

Metropolitan Police officers and the London Ambulance Service found the victim with gunshot injuries to the head after the shooting in Balfour Road, Ilford, east London, at 10.14pm on Sunday. 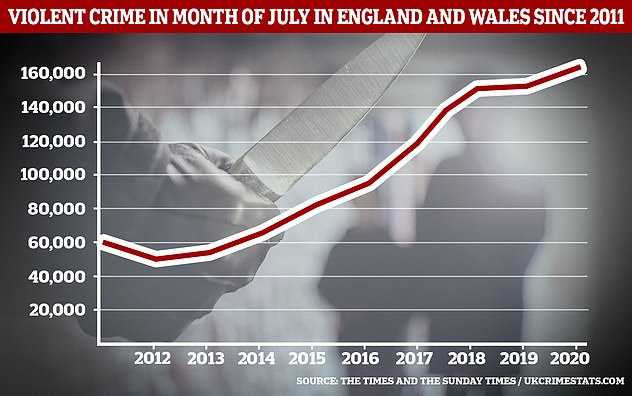 Police have not arrested anyone. The victim’s next of kin has been infomed, although formal identification is yet to take place.

Violent crime has soared to its highest level in a decade after a surge in drug feuds, domestic abuse and hate crime, statistics show.

Drug rivalries became increasingly violent in the first phase of the coronavirus pandemic in order to retain their turf.

Violence outside of venues also soared as lockdown restrictions loosened due to ‘pent up rage’, according to police.

Analysis of police data by The Times shows violent offences were at their highest level in nearly ten years across two thirds of forces in England and Wales in July.

Violent crime was higher last month than in July 2019 in 31 of 39 police forces who published their statistics.

Gloucestershire saw violent crime rise by 39 per cent while Durham had and increase of 35 per cent, the two highest rises in the country.

London Mayor Sadiq Khan warned of a spike in violent crime in the capital after the pandemic sent crime rates plummeting by a quarter in England and Wales.

July saw 17 killings in the city – two more than July 2019. January this year saw 11 homicides in the capital, and February just seven.