Berlin: Chancellor Angela Merkel has warned Germany may need to consider border crossing curbs if other European countries do not act to halt the spread of the coronavirus, particularly its new, more transmissible variants.

"We can do anything we like, but we will not succeed if others are not working in parallel," Merkel told journalists, two days ahead of a videoconference of European leaders. "We need to make sure that everyone around us is doing the same. Otherwise we have to look at measures such as entry restrictions." 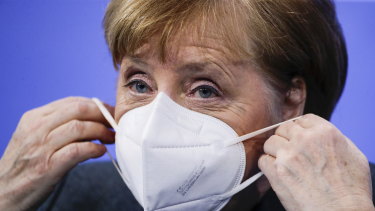 German Chancellor Angela Merkel puts on a face mask after a news conference on further coronavirus measures on Tuesday.Credit:AP

Her comments came after she and leaders of Germany's 16 states agreed to extend for another two weeks a lockdown for most shops and schools until February 14.

New infections have been falling in recent days, but were up again on Wednesday, but pressure on intensive care units has eased slightly. Virologists, however, pointing to the situation in Britain, with Europe's highest COVID-19 death toll, warn the mutants could undo all progress.

Germany shares borders with nine countries, and there are growing concerns about infection rates in some of them, including the Czech Republic, where commuter traffic is heavy. 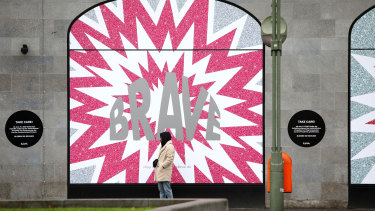 A window display reading ‘Brave’ on the closed KaDeWe luxury department store in Berlin. a lockdown has been extended for at least two weeks in most states.Credit:Bloomberg

Most schools would remain closed, despite opposition, given evidence that some new variants were more transmissible among children, Merkel said.

"If we had a situation like London, then we wouldn't be talking about schools anymore but about ambulances and overflowing hospitals," she said.

Medical masks, and not simple cotton ones, will be made mandatory on public transportation and in stores, and companies must let employees work from home until March 15 where possible.

Aid for hard-hit companies is to be improved, and retailers' write-downs on seasonal goods – which could include winter coats or ski equipment – will be taken into account.

A waiver on insolvency filings for firms hit by the coronavirus crisis will be extended until the end of April.

The provision, which had been due to expire at the end of the month, has helped contain bankruptcies in Europe's largest economy.

The number of confirmed coronavirus cases rose by 15,974 to 2.06 million, data from the Robert Koch Institute for infectious diseases showed on Wednesday. The death toll was up 1148 to 48,770.

Germany aims to bring the number of infections per 100,000 inhabitants over seven days down to no more than 50. That number currently stands at 132.

In Britain, new Office for National Statistics figures show one in eight people in England has had COVID.

It suggests that at least 5.4 million over-16s in England have had the virus, a big jump from the one in 17 people believed to be infected in September, and the new variant may be partly responsible for the rising numbers. The variant was discovered in Kent in September and is thought to be between 50 and 74 per cent more infectious.

The figures also show that one in 10 people in Wales had been infected by December, alongside one in 13 in Northern Ireland and one in 11 in Scotland.

The figures come from the ONS COVID-19 Infection Survey and are based on the proportion of over-16s testing positive for antibodies to coronavirus.