Heart-breaking moment girl, five, cries inconsolably at her mother’s funeral after the frontline nurse died during the coronavirus pandemic

This is the heartrending moment a little Chinese girl who lost her mother to the coronavirus pandemic cried ‘mum, don’t leave me behind’ when her corpse was about to be cremated.

Frontline nurse Zhang Jingjing, 32, died from a cardiac arrest earlier this month after working day and night to save patients during a two-month mission to Hubei, the former ground zero of the outbreak.

Her five-year-old daughter was inconsolable and hugged her father tightly at her mother’s cremation service yesterday in the city of Jinan, eastern China. 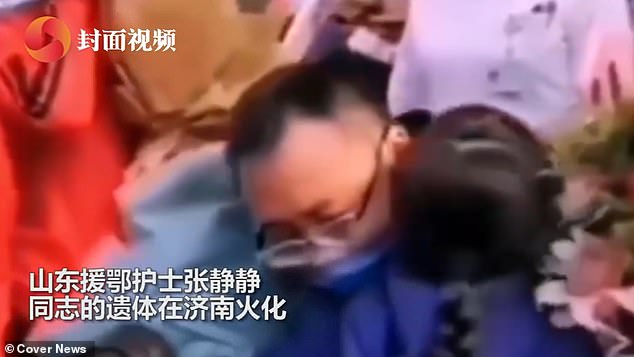 Footage released by Cover News shows the child, who remains unidentified, wailing ‘mum, don’t leave me behind’ repeatedly at her mother’s cremation service yesterday in Ji’nan 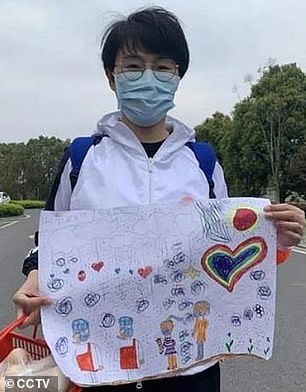 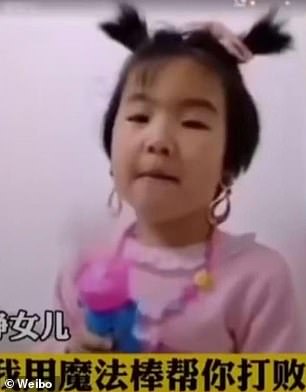 Zhang Jingjing (left), 32, died from a cardiac arrest earlier this month after working day and night to save patients during a two-month mission to Hubei. In a video filmed before her death, her daughter (right) said ‘I will use my magic wand to help mother beat the coronavirus’

Footage released by Cover News shows the child, who remains unidentified, wailing ‘mum, don’t leave me behind’ repeatedly as she refused to believe that her mother had passed.

Ms Zhang died on April 6 at the end of her 14-day quarantine period after returning to her native province of Shandong from Hubei, according to previous reports.

In a home video filmed before her sudden death, her young daughter encouraged her mother to fight the deadly disease as she said ‘I will use my magic wand to help mother beat the coronavirus’.

Her husband, Han Wentao, is a construction contractor sent to Sierra Leone in western Africa by the Chinese government.

He was arranged to fly back home via Brussels on April 11 upon hearing the tragic news of his wife’s death.

Mr Han said he wished to streamline his wife’s funeral affairs and would not arrange any other memorial service, state newspaper People’s Daily reported in a social media post. 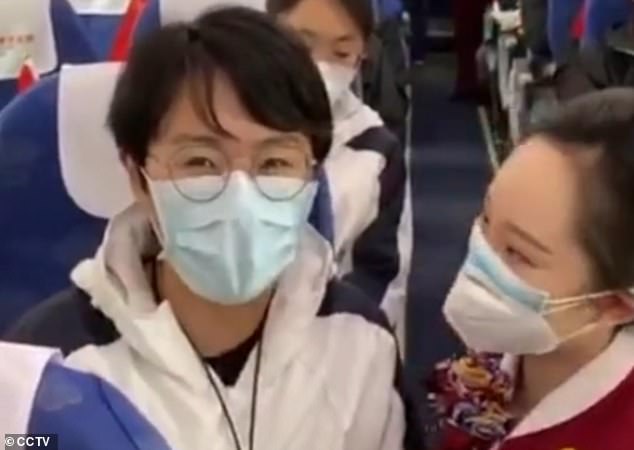 A heart-breaking video shows the medical worker, Zhang Jingjing (pictured), waving at the camera as she and her colleagues leave Hubei on a plane on March 21

Ms Zhang died of cardiac arrest after fighting on the front line against the coronavirus epidemic in Hubei for 56 days.

She was due to go home after completing her 14-day quarantine when the tragedy happened.

Ms Zhang will be remembered for her contribution to save COVID-19 patients in Hubei, Chinese officials said.

A previous video showed the medical worker waving at the camera as she and her colleagues left Hubei on a plane on March 21.

‘We will be home and meet again very soon,’ Ms Zhang said in the video. 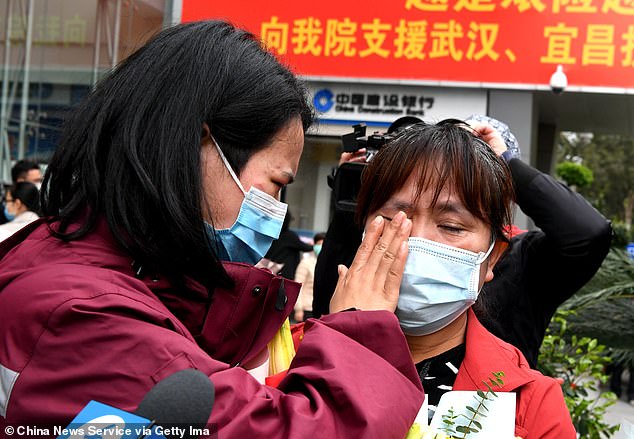 According to Southern Weekly, 2,974 medics from China’s Hubei province contracted the virus and 28 of them died. Pictured, a medic sweeps away tears for her mother on April 6

The nurse, who worked at the Qilu Hospital, was a member of the first medical team from Shandong Province dispatched on January 26 to Hubei in the wake of the epidemic.

She completed her 14-day isolation on April 4 after working day and night in Huanggang city of Hubei for nearly two months. She tested negative three times during quarantine, according to the press.

The medical worker then suffered a heart attack on the next morning, just before she was allowed to return home.

The Shandong hospital announced her death on April 6 after all treatment failed.

Mr Han was unable to bid a farewell to his wife because Sierra Leone had suspended all flights to China due to the pandemic, according to the press.

He said the last time the couple saw each other was in December last year.

‘I still feel numb. I can’t believe everything,’ Mr Han wrote on his social media page when Ms Zhang was being rescued. ‘Hold on there, my wife! Our family can’t live without you!’ 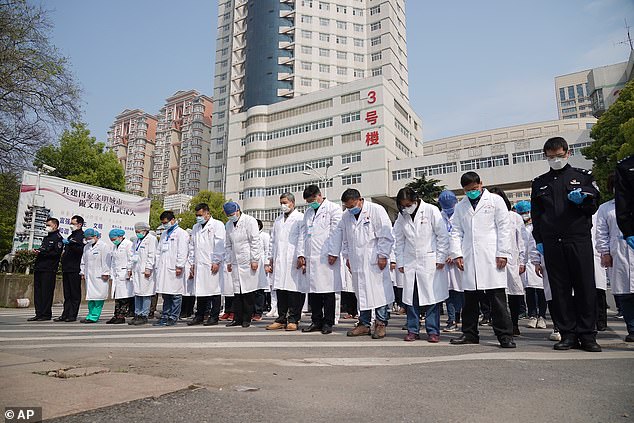 The virus has killed 4,633 people and infected 82,836 in China, according to the latest government figures. Pictured, medical workers bow their heads during a national moment of mourning for victims of coronavirus in Wuha on April 4

The deaths of medical workers have proven to be extremely sensitive news to the Chinese government amid the pandemic.

The country has not released an official toll of doctors and nurses who died on the line of duty across the country.

According to Southern Weekly, 2,974 frontline medics from Hubei contracted the virus and 28 of them died.

State media claimed on March 31 that none of the 42,600 medical workers dispatched to Hubei to fight the disease was infected.

The virus has killed 4,633 people and infected 82,836 in China, according to the latest government figures.

Worldwide, more than 211,000 people have lost their lives and over three million have caught the bug in the pandemic.