A security guard has been charged for allegedly knocking a man unconscious outside a strip club in Kings Cross early this morning.

The man, 33, was trying to gain entry to Showgirls on Darlinghurst Road when the guard allegedly pushed him, causing him to fall backwards, hit his head on the path and lose consciousness for several minutes. 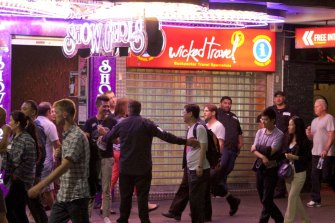 The exterior of Showgirls on Darlinghurst Road before the lock-out laws.Credit:Steve Lunam

Passers-by concerned for the man’s welfare flagged down patrolling police about 1am and the officers rendered first-aid before paramedics took him to St Vincent’s hospital.

The alleged incident comes as the former red-light district strives to reinvent its image as a family-friendly entertainment precinct in the wake of the lock-out laws designed to end alcohol-fuelled violence in the precinct being lifted earlier this year.

The lifting of the lock-out laws was hailed by the NSW government in February as a move that would help revive the local economy, with the situation being closely monitored and a review to be conducted after 12 months.

The injured man was held under observation at hospital for nine hours before being discharged.

He has been granted conditional bail to appear in Central Local Court on May 25 and police have applied to revoke or suspend the man’s security licence.