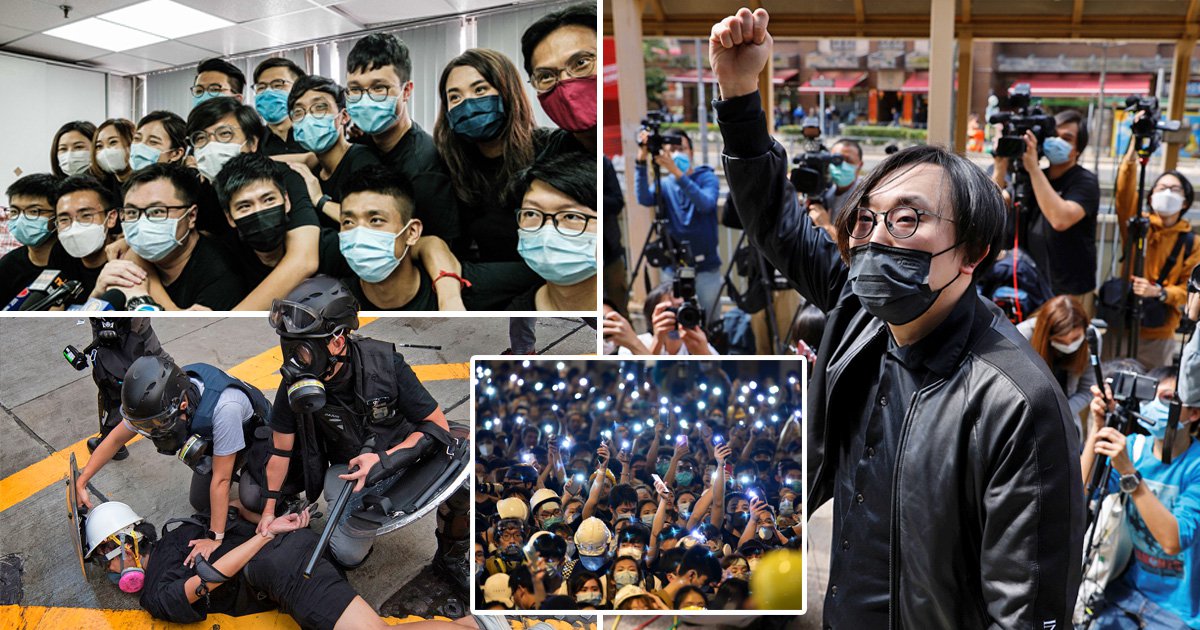 Police in Hong Kong have re-arrested 47 pro-democracy activists under a controversial new law.

The defendants allegedly violated the national security legislation imposed by China when they participated in unofficial election primaries for the region’s legislature last year.

The former legislators and democracy advocates had been arrested in January but were later released. Now police say the defendants, including 39 men and eight women aged between 23 and 64, have been detained again and will appear in court on Monday.

It is the largest use of the sweeping national security law and is being seen as an attempt to cripple the semi-autonomous region’s democracy movement.

Last month 55 of the city’s best-known democracy campaigners were arrested in a series of dawn raids.

On Sunday, police confirmed all but eight of them had now been charged with one count each of ‘conspiracy to commit subversion’ – one of the new national security crimes.

Beijing is battling to stamp out dissent in Hong Kong after swathes of the population came out onto the streets in 2019 in mass protests that often turned violent.

The security law, imposed on the city last June, criminalises acts deemed to be subversion, secession, terrorism and collusion with foreign forces.

Those charged are routinely denied bail until they face trial and can be given life in prison if convicted.

The charged activists come from across Hong Kong’s opposition, from veteran former pro-democracy lawmakers to academics, lawyers, social workers and a host of youth activists.

Some were defiant as they prepared to report to police.

‘Democracy is never a gift from heaven. It must be earned by many with strong will,’ Jimmy Sham, a key organiser of 2019’s huge protests, told reporters.

‘We can tell the whole world, under the most painful system, Hong Kongers are the light of the city. We will remain strong and fight for what we want.’

Gwyneth Ho, a young journalist turned activist, posted on her Facebook page before being charged: ‘I hope everyone can find their road to peace of mind and then press forward with indomitable will.’

Many of the candidates for the planned election were disqualified from standing, and authorities scrapped the election because of the coronavirus.

But Chinese and Hong Kong officials described the primary as an attempt to ‘overthrow’ and ‘paralyse’ the city’s government and claim it was a threat to national security.

Western nations have accused Beijing of using its crackdown to shred the freedoms that were promised under the ‘One Country, Two Systems’ setup when the former British colony was returned to China.

After last month’s arrests the UN’s rights watchdog said the sweep confirmed fears the security law was ‘being used to detain individuals for exercising legitimate rights to participate in political and public life’.

Beijing said the security law would target only an ‘extreme minority’ and was needed to restore stability.