London: The European Commission has hit the pause button on a controversial investment deal with China as a direct result of sanctions Beijing imposed on five British and European MPs who regularly criticised the regime.

The decision by the European Union’s trade commission to suspend “political outreach activities” in China is a further escalation of tensions between the bloc and the superpower. It follows earlier sanctions imposed by the West against Chinese officials for human rights abuses of Uighurs in Xinjiang. 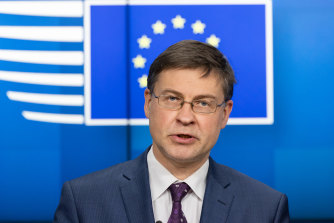 Valdis Dombrovskis, trade commissioner for the European Union (EU), said the sanctions made it too difficult to continue with the deal. Credit:Getty

The deal that has just been halted would have allowed European companies greater investment access in China and was seen as a diplomatic coup by Beijing.

European companies would have been granted certainty for their operations in China and a promise that they would not face any discriminatory practices in manufacturing, particularly for electric cars, chemicals, and telecoms and health equipment.

But the fate of the Comprehensive Agreement on Investment (CAI), which was agreed in principle in December, has been in the balance as relationships have deteriorated.

The EU, US, Canada and Britain sanctioned four Chinese officials in March. China retaliated by sanctioning a host of MEPs including five Members of the European Parliament.

“It’s clear in the current situation with the EU sanctions in place against China and Chinese counter-sanctions in place, including against members of European Parliament, (that) the environment is not conducive for ratification of the agreement.”

He said the future of the deal “will depend really on how broader EU-China relations will evolve”.

The European Commission downplayed the significance of Dombrovski’s comments but European parliamentarians who were sanctioned by China in March were jubilant.

One of those sanctioned, France’s Raphael Glucksmann, who serves on the European Parliament’s Committee on Foreign Affairs, said the EU Commission had made the decision ahead of a crunch-time vote on freezing the deal later this month.

“We felt we were going to win this vote,” Glucksmann said.

“The commission is therefore taking the lead. Considering the frenzied lobbying of multinationals and the German government for the CAI, this is a huge victory.”

Sophie Richardson from Human Rights Watch said Xi Jinping had only himself to blame.

“‘Lifting a rock only to drop it on one’s own feet,’ Mao once said,” Richardson said.“Xi Jinping has mostly himself to blame for this outcome.”