Living in a low-rise block of flats on busy Lygon Street, Brunswick East resident Sam Danby did not expect to be able to power his unit with solar. But he is one of few Melbourne apartment-dwellers who now does so.

Australia leads the world in solar production, with panels on about 20 per cent of standalone homes in Victoria, but apartment residents have been mostly left behind. 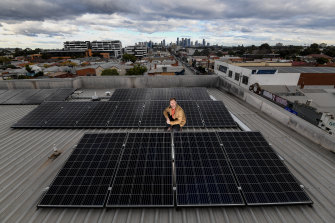 Sam Danby on the roof of the Brunswick East apartment block he lives in.Credit:Justin McManus

The discrepancy is huge, says Dr Mike Roberts from the University of New South Wales, with the percentage of apartments with solar “close to zero”.

There are plenty of challenges: roof space is a common area and 75 per cent of owners, including landlords, need to agree.

The simplest and most popular option is to power common areas with solar, especially for high-rise buildings that have a small roof but hundreds of apartments while chewing up a lot of energy running lifts and car parks.

Owners can also seek out an individual system but still need approval from the owners corporation to license or lease a common area for individual use. (From December, reforms will bar owner corporations from unreasonably prohibiting the installation of sustainable items like solar panels.) Each system would also need its own cables.

The difference in Mr Danby’s case is that he shares one system with seven neighbours and two commercial tenants, through a solar splitter invented at the University of Melbourne.

He moved in around three years ago, about the same time another resident started doing the legwork to push for the building to get a solar share system from Melbourne start-up Allume Energy.

“I probably didn’t expect it to be possible in our building. I didn’t know what the technical restraints were, but I kind of assumed in an apartment building it would be difficult to organise,” Mr Danby said.

“Getting the votes you need from the owners, that just takes a little bit of time.”

Mr Danby said the owners each paid about $1000 after receiving a rebate from the Victorian government.

SolShare is designed to fill the gap in access for people in low-rise apartments — generally serving between six and 60 units, or up to 100 — with a big surface area on the roof for absorbing solar.

Energy is then split equally between residents who tend to use electricity at different times of the day, meaning solar can be efficiently shared among themselves rather than sold to the grid and bought back at a higher cost.

“You might have one person working from home, one person using electricity in the morning, one person might be a retiree and they’re using across the day. Another person is a tradie and gets home at 3.30pm,” co-creator and chief executive Cameron Knox said.

Housing Choices Australia has taken up the technology at its community housing in Altona North and Preston. Electricity bills for the 96 households have fallen an average of 35 per cent, the housing provider’s assets manager Ravi Koneru said, with no increase on their rent.

The company is working with property developers to introduce SolShare at new apartments before buyers are in the picture. Other developments, like the Folia building by Mirvac in Doncaster, are being developed with half of the 102 apartments connected to SolShare so that buyers can choose.

But it is not viable for high-rise apartments, without enough roof space for every tenant to power their home.

Dr Roberts said there was also the option of an “embedded network”, where electricity is often bought “in bulk” and sold on to all apartments along with solar generation. But he said regulations made embedded networks complicated for owner corporations to set up.

The Andrews government has been reviewing embedded networks, over fears they were offering poor outcomes for residents, with a plan to ban them in new residential apartments unless they offer low-cost renewable energy.

Dr Roberts said governments needed to find a path forward, including a way for landlords to recoup the cost of installation.

Another option, particularly for buildings where solar isn’t viable, is buying into a solar garden. Unlike roof solar, network fees will still end up on the electricity bill because energy from the gardens has to travel through the network.

Gregor Evans, Victorian president of the Strata Community Association, said buildings often needed one or two driven residents to push for the change to solar.

As more Melburnians move into apartments, he wants further incentives from the state government, including funding for a feasibility report into solar at residential buildings.

“In terms of the opportunity to reduce the carbon footprint of the state, it is a massive opportunity, and we’re missing out on that,” Mr Evans said.

The Victorian government has been handing out $1850 rebates, set to reduce to $1400 from July, under the Solar Homes program which the Victorian Auditor-General on Thursday said had not been adequately prepared.

The scheme includes rebates for rental properties and is open to apartments.