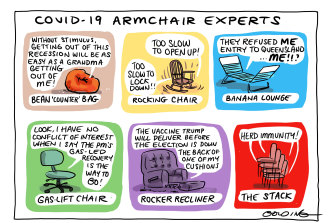 To submit a letter to The Age, email [email protected] Please include your home address and telephone number.

I lost my mother, but I’m grateful for these rules
My mother has just passed away. She was nearly 98 and her journey with COVID-19 was too much for her body to bear.

She had been protected in lockdown in her aged care home but this virus defied the wonderful efforts made to protect her. She had spent five weeks in an acute care ward in hospital and had been cleared to return to her home, but we don’t know the effect the virus had on her body. She had been through too much.

She recently had to attend the funerals of, and say her goodbyes to, both of her beloved sons. No mother should have to go through that much pain. She was frail, vulnerable and depleted.

Thank you, Victorians, for bearing the lockdown regime to give our older generation a chance, thank you, Premier, for putting the laws in place for us to work from. These measures allowed her to return to a familiar and comfortable environment, to be at peace and for my sister and our families to have a chance to say our goodbyes. I am grateful she was given the respect she deserved for a life well lived.
Karen Meyer, South Melbourne

Carping criticisms, no positive suggestions
Bravo, Janet Whiting (‘‘‘Stay strong and stop bucketing everyone’’’, The Age, 18/9): ‘‘we must, at the moment, stop the blame game … All that is happening is we are giving the nutters authority, which is not what we want.’’

All we get from the state opposition and the federal government (and much of the media) is carping criticism, with no positive suggestions.
Merv Keehn, South Melbourne

Family members must have access
No family visits to Victorians resident in aged care until 2021 (The Age, 19/9)? There is not, and may never be, a test to give 100 per cent security of the absence of COVID-19 in a person entering an aged care facility, and yet dozens of people enter aged care facilities every day.

Putting myself in the position of a resident: ‘‘Many of a team of strangers may wash my body, put food into my mouth when I open it, call a random locum doctor in the middle of the night if I have symptoms, but my humanity has been discounted – without my family, I am a physical body without a soul.’’

Family must be permitted to visit the elderly, using the precautions currently imposed upon the many strangers who are given access. Through the suffering of the elderly residents in aged care during this pandemic, society has at last identified a line over which it is unacceptable to cross.
Ruth Farr, Blackburn South

Casey cluster a case in point
The City of Casey outbreak has put enormous strain on the trace-and-test system despite stemming from seemingly unlawful activity by members of just five households.

Imagine the impact of multiple similar outbreaks. Their absence, at least at this stage, certainly indicates how important the restrictions have been in limiting the spread and that the Victorian community has, to a very significant extent, complied with the restrictions.

On a much more serious note, this single outbreak may raise the critical daily average enough to delay the lifting of the restrictions everyone so desperately needs.

The missing element
I read with great interest how some other liveable cities in the world have handled the pandemic (‘‘Different cities, same enemy’’, The Sunday Age, 13/9). I was particularly interested to read that Osaka’s public schools reduced their summer holidays from six weeks to two, which is consistent with Japan’s strong focus on maintaining its high educational standards.

It made me think, as a parent of three school-age boys, that a key missing element from our educational debate is a clear and unequivocal acknowledgment our students are increasingly falling behind and that a similar catch-up strategy to Japan’s is needed.

Why could we not take a page from Japan’s book and consider a similar form of catch-up education? I am sure some innovation from schools and the government would be required and that there are obstacles to overcome, most likely, strong resistance from teachers and the education union.

However, this strikes me – and many of those parents with whom I discuss this issue – as a very obvious and much needed solution to address the major developmental and economic impacts of Victoria’s children falling increasingly behind in their education.
Jon Morley, Caulfield North

It definitely is their job
I could not disagree more with Senator Jane Hume when she says it is not the job of superannuation funds to rebuild the economy, create jobs, reframe the climate debate or require industrial relations changes (The Age, 19/9).

Super funds are there to maximise returns for their clients, which is done by investing in viable long-term projects making sure that all the factors that might negatively affect their investments are minimised. They certainly will not invest in projects such as coal mining or gas-fired electricity generation if they perceive that their assets will end up being stranded as white elephants.

Perhaps the government needs to learn the lesson of ‘‘follow the money’’.
Alan Inchley, Frankston

If they know this …
Let’s just ask potential citizens to explain why we drink beer, eat fish and chips, play cricket and have the Queen as our head of state, while not being British.

If they can do that, they’re well-equipped for the paradoxes of life in Australia.
Tim Durbridge, Brunswick

Has that bird flown?
We should be wary of the call by investment banker John Wylie for lower taxes and an airport rail link (The Age, 19/9).

Neo-liberal reforms such as lower taxes and privatisations of state-owned power and telecommunications have not brought the promised benefits. In fact, they have arguably done the opposite with the stalling of Australia’s broadband network, until a new government-owned entity, NBN Co was created.

Similarly, the fragmented private power system, with its labyrinthine oversight structures and vested interests has increased power prices and held back essential decarbonising of the electricity industry for almost two decades.

We must now question the assumption of the perpetual growth of air travel and the environmental consequences of the associated carbon emissions. The great majority of business travel is unnecessary with modern communication technologies.

Increasingly, people are reflecting on the environmental cost of tourism. Perhaps the time for an airport rail link has passed.
Michael Hassett, Blackburn

Variations on a theme
Traditional Christianity has been on the nose among our ‘‘enlightened’’ opinion leaders and it seems our government is following a new variation.

Spare us the platitudes
The Barney Zwartz Faith column can’t go unchallenged (The Sunday Age, 13/9). Basically it’s the old ‘‘don’t blame God for the pandemic or anything bad because he’s really doing us good but we won’t understand how this works until we’re dead’’ argument. Don’t feel sad, be positive. God’s got a plan.

Recently, a carer at my mother’s aged-care facility lost her four-year-old son, killed by a falling tree.

According to Zwartz, this is all for the mother’s benefit. Her excruciating grief is but a temporary (lifelong for her) price to pay for the inevitable revelation of ‘‘goodness’’ God enacts for believers.

Zwartz can’t explain random misery and death in a rational way because it has to be a good thing enacted by a good God. This is his starting point for everything that happens.

Yes, try to look on the bright side, folks, but spare us the platitudes about how this is ultimately good for us. It is not helping.
Peter Harris, Preston

Thank you, Barney
It was wonderful to the photo of Barney Zwartz in the Faith column. Having always enjoyed his writings expressing his faith the photo gave a connection to the reader and was especially meaningful during this lockdown when so many of us are feeling isolated.

The Bible verses he chose were so appropriate in giving us hope. A big thank you, Barney, as it lifted our spirits.
Glenise Michaelson, Montmorency

Disappointing to see
How disappointing to see this one-time advocate for the ordinary man becoming a mouthpiece for this tyrannical state government (‘‘Premier the focus of every grievance’’, Jon Faine, Opinion, The Sunday Age, 13/9).

The meaning of libertarian is belief that people should be able to do whatever they want as long as their actions do not hurt others. In other words freedom of choice, not blind obedience to authority.
It is not synonymous with ‘‘conspiracy theorist’’.

And, sure, democracy is the best way to solve problems, but Daniel Andrews is running a state in which a group of people make arbitrary rules enforced by heavy-handed policing, with no parliamentary debate, or explanation.

If you believe this is democratic, Jon, you’ve come a long way from the freedom fighter this ‘‘wacko ‘libertarian’’’ listened to for many years.
Lesley Black, Frankston

If it’s not funding …
So , if it’s not ‘‘funding issues’’ that have had an impact on the ‘‘quality of care and safety’’of frail aged residents as Dr Brendan Murphy suggests (The Age, 19/9), one can only assume that it must be a lack of will on the part of the federal government to provide the necessary legislative framework to ensure a more adequate number of appropriately trained staff.
Glenda Addicott, Ringwood East

A perennial US pattern
‘‘Heartland Blues’’ (Extra, The Sunday Age, 13/9) profiled Joe Biden, a Democrat, who could be the 46th US president. Will it amount to a hill of beans if he is?

The 33rd president, Democrat Harry S. Truman (1945-1953) in the first post-war year of his presidency proposed a national health insurance scheme for all Americans with provision for financial assistance for those in long-term recovery. It was to be paid for from fees and taxation.

It went nowhere. In the mid-term elections the Republicans gained control of the Congress and they were vehemently against it. The American Medical Association fiercely opposed the plan and public concern over being taxed by a federal government saw widespread opposition. Many called the scheme ‘‘Communist’’ and rejected it.

It’s a perennial pattern in American politics on this social reform. What will change on this issue if Joe Biden is elected as seemingly another saviour of the American people as a new president of the United States invariably gets cast?
Des Files, Brunswick

The bigger picture
Chris Uhlmann says our response to the pandemic is damaging to the economy and to the social fabric (‘‘Virus reveals some uncomfortable truths about us’’, Comment, 17/9).

Hard to argue with that. But consider, say, Florida: similar population to Australia, less restrictions and less compliance, more than 675,000 COVID-19 cases and more than 13,000 deaths.

It is naive and simplistic to think this carnage would not damage the economy and the social fabric. Booming hospital and funeral industries are not the same as a healthy economy.
Sue Harlow, South Melbourne

Ruth Bader Ginsburg
Vale Ruth Bader Ginsburg. A lone, intelligent, and thoughtful voice in the US Supreme Court over past decades.
Her passion for justice will never be forgotten; and will so tragically be silent from now on.
Wendy Logan, Croydon North