Iceland is re-opening schools and businesses after just 1,799 coronavirus cases and 10 deaths following a successful testing and tracing strategy to isolate every case.

The Nordic nation has reduced its daily infection count from 106 at the height of the crisis to single digits and even zero on some days.

‘I didn’t expect the recovery to be this fast,’ said Iceland’s chief epidemiologist, Thorolfur Gudnason.

Iceland’s success is partly down to its tiny population (360,000) but also reflects decisive action by authorities who used a rigorous policy of testing and tracking to isolate people even when they had no symptoms.

Altogether, 19,000 people were ordered into two-week quarantine along with all new international arrivals, but a total lockdown was never imposed.

Iceland is now seeing fewer cases per capita than its Nordic counterparts in Sweden, Denmark, Finland or Norway. 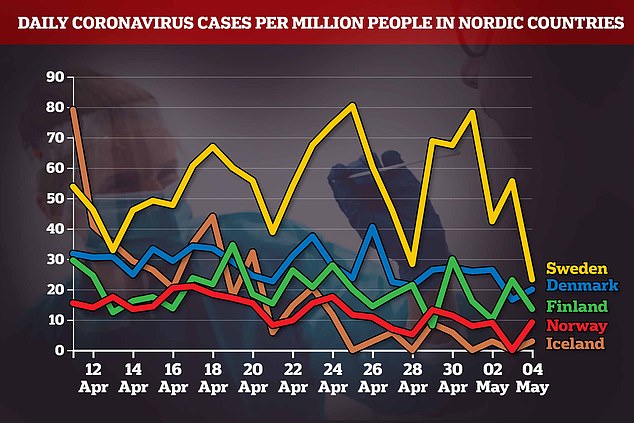 This graph shows the number of daily virus cases per million people. In early April, Iceland had the most alarming figures of the Nordic countries, but it now has the most encouraging

As in several other European countries, some of the first cases of the virus in Iceland were brought back from ski resorts in the Alps, including the Austrian village of Ischgl.

The country confirmed its first case of the virus on February 28 and declared Ischgl a high-risk zone on March 5, two days before authorities there confirmed the first case.

Gudnason, the chief epidemiologist, said Iceland had been updating and testing its response to a global pandemic since 2004.

Hospitals had been testing people arriving from abroad for a month before the first confirmed case, and a media campaign urged hand washing and social distancing.

‘Each institution involved in the response knew its role from the start,’ he said.

Iceland quarantined everyone returning from virus hotspots and began test-and-trace measures to locate and isolate every case.

The country’s testing capacity was helped by the presence of Reykjavik-based biopharmaceutical company deCODE Genetics, which early in the outbreak teamed up with health authorities to ramp up public testing.

Over six weeks, Iceland managed to test almost 50,000 people, more than 13 per cent of the population, the biggest chunk of any country in the world.

The country used its facilities to test a cross-section of the population, and identified scores of new cases, including people with mild or no symptoms. 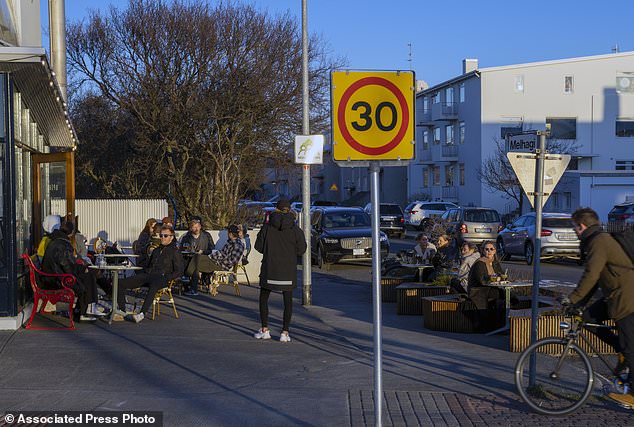 People sit outdoors at a restaurant in Reykjavik on April 29, after the country had recorded only three new infections in the space of four days

Kari Stefansson, deCODE’s CEO, said the approach showed that ‘with the use of modern science, even an epidemic like this one can be contained.’

Iceland’s mass testing yielded new leads for scientists about how the virus behaves. Early results suggested 0.6 per cent of the population were ‘silent carriers’ of the disease with no symptoms or only a mild cough and runny nose.

In a random sample of 848 children under the age of 10, none of them tested positive, which guided Icelandic authorities’ decision to keep schools open for children under 16.

Alongside the testing, civil defence authorities set up a Contact Tracing Team including police officers and university students.

The team identified people who had come into contact with infected individuals. A mobile phone tracing app was up and running a few weeks later.

Primary schools remained open, and some cafes and restaurants kept operating, following social distancing rules: no more than 20 people gathered at once and everyone 6.5ft apart. 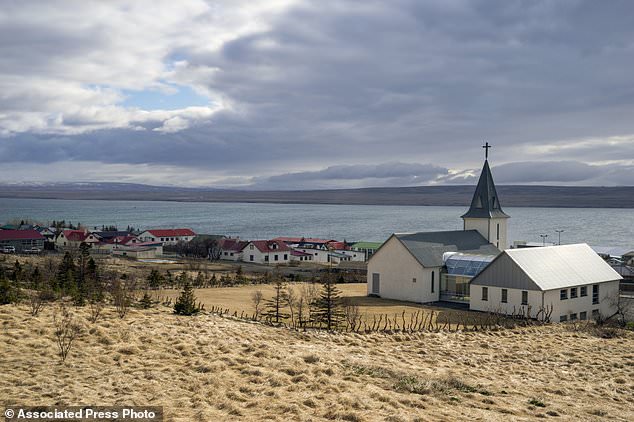 The village of Hvammstangi in northern Iceland, where 600 people were put under lockdown for a week in a town which eventually recorded 26 virus cases

As of yesterday, gatherings of up to 50 people are permitted, high schools and colleges can resume classes and all businesses except bars, gyms and swimming pools can reopen.

However, the 14-day quarantine rule remains in force, striking an economic blow to a country which depends on tourism.

One northern village of 600 people, Hvammstangi, had already been isolated from the rest of Iceland by winter storms before the coronavirus arrived.

The town ended up having 26 confirmed cases of the virus, and was put under lockdown for a week while the transmission was being mapped out.

The local grocery store created ‘shifts’ for customers so they could shop while socially isolating.

In an April snowstorm, local search and rescue volunteers used their jeeps to drive hospital staff to and from work and shuttled warm meals to elderly residents.

‘It really showed me the benefit of living in a small community.’