International Monetary Fund boss pleads with the UK to DELAY its December exit from Brexit transition because of the coronavirus pandemic, telling ministers ‘It is tough as it is, let’s not make it any tougher’

The head of the International Monetary Fund last night pleased with Britain to delay severing its ties with the EU beyond the end of the year to ease the impact of the coronavirus pandemic.

Bulgarian economist Kristalina Georgieva appealed to the Government to focus on the pandemic, saying: ‘It is tough as it is. Let’s not make it any tougher.’

Her comments in a BBC radio interview came after EU and UK negotiators Michel Barnier and David Frost yesterday held a remote meeting on a trade deal to allow the transition period to end as planned on December 31 as planned.

Despite the pandemic that is threatening to produce the worst economic reverse in almost a century, ministers are insisting that the deadline will not be extended.

But IMF chief executive Ms Georgieva last night suggested that the transition be extended at a time when not just the UK but world economies are being battered.

‘My advice would be to seek ways in which this element of uncertainty is reduced in the interests of everybody, of the UK, of the EU, the whole world,’ she said. 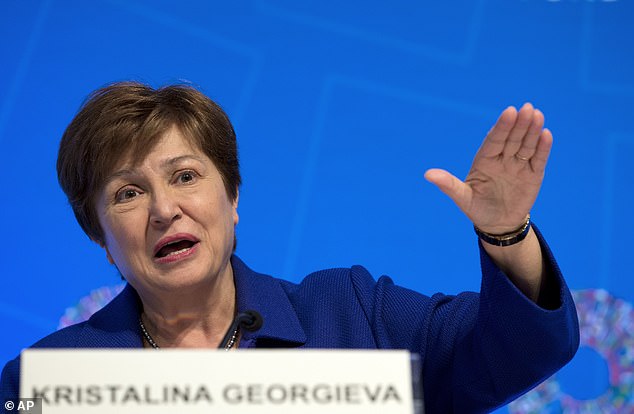 Bulgarian economist Kristalina Georgieva appealed to the Government to focus on the pandemic, saying: ‘It is tough as it is. Let’s not make it any tougher’ 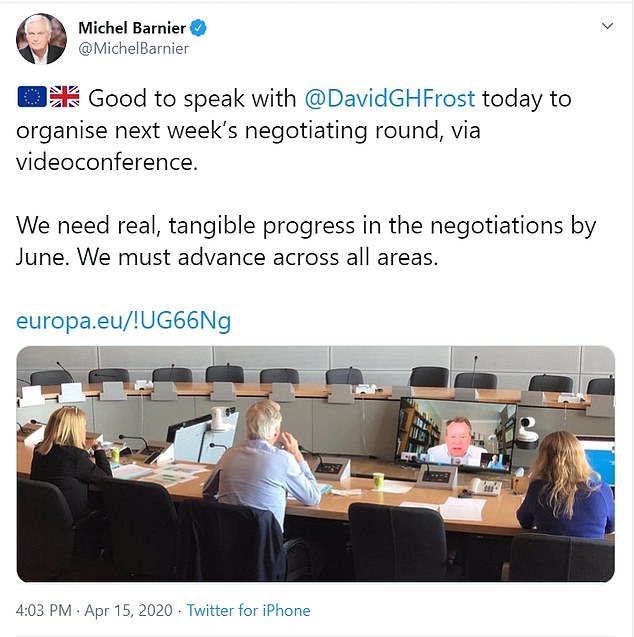 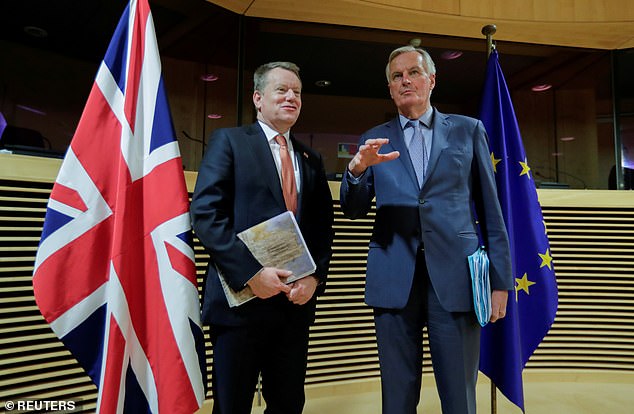 UK negotiator David Frost and Brussels counterpart Michel Barnier (pictured above at a previous round of talks) held remote talks  yesterday (top) and unveiled three week-long virtual summits are planned, later this month, in May and early June

She was speaking after the IMF warned on Tuesday that the world economy is heading for its steepest downturn this year since the Great Depression of the 1930s.

Downing Street insisted last night its threat to walk away from Brexit talks in June if not enough progress on a deal with the EU had been made remains in place despite the coronavirus pandemic.

In a joint statement the two sides said that a meeting of high-level figures earmarked for June would ‘take stock of the progress made’, and suggested the two sides remain some way apart.

Asked about the threat to walk away from the talks in June and go it alone if not enough progress had been made, the Prime Minister’s official spokesman told reporters: ‘What we said was June was the period in which we can take stock in relation to how negotiations have progressed.

‘That remains the case.’

In her interview with the BBC, the IMF managing director praised the emergency measures taken by Britain’s finance ministry and the Bank of England which she said had been taken ‘early’ and were well-coordinated.

‘That very strong package of measures is helping the UK, but given the UK’s sizeable role in the world economy, it’s actually helping everyone,’ Georgieva said.

The government has increased spending and cut taxes in measures that Britain’s budget office estimates will cost 100 billion pounds ($125 billion). It has also offered guarantees for 330 billion pounds of company loans.