Beijing: Chinese coronavirus-vaccine maker Sinovac Biotech is good at getting its products to market. It was first to begin clinical trials of a SARS vaccine in 2003 and first to bring a swine flu vaccine to consumers in 2009.

Sinovac is now seeking to supply its coronavirus vaccine to developing nations – from Brazil to Turkey to Indonesia. While graft and weak transparency have long plagued China's pharmaceutical industry, seldom has the reliability of a single drug vendor from the country mattered this much to the rest of the world. 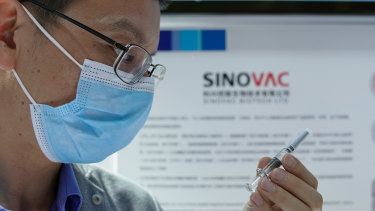 Sinovac is one of China's two coronavirus-vaccine front-runners, with its clinical testing in the same final stage as Moderna's and Pfizer-BioNTech's. Domestically, Sinovac's vaccine is in second place, with state-owned Sinopharm's vaccines more widely administered under an emergency-use program. Another Chinese vaccine, developed by CanSino and a military research institute, is approved for emergency use by China's military.

Sinovac's vaccine, Coronavac, may end up adopted in a number of developing markets. Officials in Brazil and Indonesia – the most populous nations in Latin America and south east Asia – say Coronavac could be approved in coming weeks. In Brazil, São Paulo Governor João Doria has called it the safest vaccine the country has tested.

Sinovac has not yet released efficacy data, making it unclear whether its vaccine can protect recipients as successfully as the vaccines from Moderna and Pfizer, which were more than 90 per cent effective in preliminary analyses.

Sinovac has acknowledged the bribery case involving its CEO, saying in regulatory filings that he cooperated with prosecutors and was not charged. The CEO said in testimony he could not refuse demands for money from a regulatory official.

Sinovac has not been involved in safety scandals and there is no evidence that any of the vaccines approved in cases involving bribery were faulty. But some medical experts say that extra scrutiny of Sinovac's drug claims is justified, given its record of moral flexibility.

"The fact that the company has a history of bribery casts a long shadow of doubt over its unpublished, non-peer-reviewed data claims about its vaccine," said Arthur Caplan, medical ethics division director at New York University Langone Medical Centre. "Even in a plague, a company with a morally dubious track record has to be treated with great caution concerning its claims."

While Sinovac's history of bribery has raised concerns among investors of the Nasdaq-listed company, only in recent months has its record taken on such global implications. Governments are weighing the risks of new vaccines from companies like Sinovac against the certainty of more deaths if the pandemic continues. 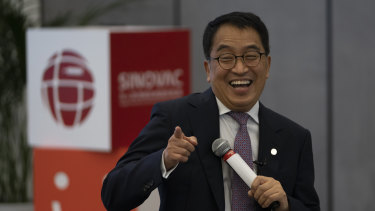 Yin Hongzhang, who shares a surname with Sinovac's CEO but is no relation, was sentenced in 2017 to a decade in prison for taking bribes from Sinovac and seven other companies. Sinovac's Yin Weidong, now 56, was not charged and continues to oversee the company's coronavirus-vaccine drive this year.

For Sinovac, that case was not a one-off: At least 20 government officials and hospital administrators across five provinces admitted in court to taking bribes from Sinovac employees between 2008 and 2016.

Sinovac said in 2017 it had launched an internal investigation in response to the bribery cases. It has yet to announce the investigation's result.

In its latest annual report, released in April, Sinovac said the company maintained strict anti-corruption policies but that "these policies may not be completely effective".

Corruption in China's pharmaceutical industry is a long-running scourge. Dali Yang, a University of Chicago political scientist, said China's shift from decentralised drug approvals in the 1990s to centralised reviews in the 2000s created opportunities for graft.

But corruption is no longer as rampant as it once was, after several high-profile crackdowns sparked by drug-safety scandals, Yang said. In 2007, China executed Zheng Xiaoyu, the former head of the State Food and Drug Administration, in a grim warning to the industry. China's President Xi Jinping launched another broad anti-corruption drive in 2012.

In a Beijing court in 2016, Yin Hongzhang, the former deputy director of the China Food and Drug Administration's drug-testing centre, said Sinovac's Yin Weidong gave him cash bribes over nine years as he sought regulatory approval for the company's vaccines for hepatitis A, SARS, avian flu, foot-and-mouth disease and influenza A.

Sinovac's CEO said in his testimony that he "could not refuse" requests from a regulator.

For Sinovac, the bribery cases have had little visible impact except to exacerbate an acrimonious shareholder struggle that has frozen trade of its stock on Nasdaq since February 2019. This ownership battle has taken dramatic turns, including a physical fight for the company seal – a stamp used by Chinese firms for legalising documents – that Sinovac said resulted in a factory power outage and ruined vaccines. Sinovac has otherwise continued business as usual.

Caplan, the medical ethics professor, said Sinovac's history of bribery would alienate some potential customers. But some countries may still prefer Sinovac's vaccine, as it can be stored closer to room temperature than the ones from Pfizer-BioNTech and Moderna. And some may lack other options.

"When there are no options and you're in a plague, you tend to take what you can get," Caplan said. "Sketchy history or not."