Beef is off the menu in some of Jakarta’s warungs. The iconic Rendang curry is now too expensive to make as sky-rocketing Australian beef prices force food stalls to serve telur balado – boiled eggs with chilli sauce – instead.

Importers and wet market sellers are angry. Three days of strikes have forced the Indonesian Trade Ministry to warn it may have to go elsewhere. Mexican cattle and Indian buffalo are all on the table as replacements in Indonesia’s market – worth $575 million-a-year to Australian live exporters – at the same time as Australian beef faces restrictions from China. 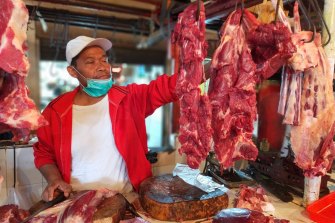 But the dispute is not the product of profiteering, sanctions or bilateral tensions that have become a hallmark of geopolitics in the past two years. It is much more cyclical than that.

A great herd rebuilding is under way across Australia. Farmers slaughtered and exported their cows by the millions as a crippling drought swept across the country and sent the national herd to its lowest level in 30 years. Now rain and greener pastures have finally allowed farmers to restock.

So farmers are sending fewer cows to Indonesia, helping to push up the price of beef by almost 40 per cent in the past six months, at the same time as local production struggles to keep up.

Indonesia’s domestic beef makes up 65 per cent of the overall market, but it is priced at a premium, leaving many wet markets relying on imported feeder cattle to supply smaller volume customers.

“We could not handle it anymore,” said Sukarma, a meat seller at the Rawamangun wet market in East Jakarta, who went on strike last week after watching his turnover fall by 50 per cent since December. “If we did not do it, the price could fly up higher and higher and end up with nobody buying beef anymore.”

“For us meat sellers at wet markets, we only want the prices to be lowered,” said Sukarma. “That’s all we ask. It is very difficult for us to sell it at a high price. The government said we must eat nutritious food. But if the price is so high nobody can afford it [during] a pandemic.”

The executive director of the Indonesian Beef Cattle Businessmen’s Association, Joni Liano, was frank about the situation. “Only countries that afford to pay can get the cattle,” he told Indonesian newspaper Kompas last week.

The great Islamic festivals, where daily fasting gives way to feasting after sundown, are looming. From April, when Ramadan begins, demand for beef will be insatiable. A beef strike could suddenly become politically sensitive beyond the wet market.

Didi Sumedi, Indonesia’s director general of foreign trade said the government was looking at diversifying its beef sources through India, Brazil and Mexico.

“The increase of price in Australia is because they are doing cattle regeneration programs so that they hold exports – they don’t stop it – but it affects the supply and demand side so that the price increases,” he said. “Of course we will not be quiet, we try other sources.”

ANZ economist Michael Whitehead said in December that the price rises in 2020 had been “unparalleled”.

“Even by 2015–16 standards, and despite ongoing predictions by many in the industry that a market correction is imminent, there has still been no sign of one,” he said.

“Certainly, the fundamentals for prices staying reasonably high are strong, as cattle producers across Australia continue to drive prices through restocking, to build up their depleted herds”.

In Yass, NSW, sheep and cattle farmer Carolina Merriman said without the price surge, many farmers would not have survived the economic effects of the drought and the 2020 bushfires.

“Farmers have come out doing exceptionally tough this year after having everything thrown at them,” she said. “Australia is still building up to where we were before we had mother nature come at us.” 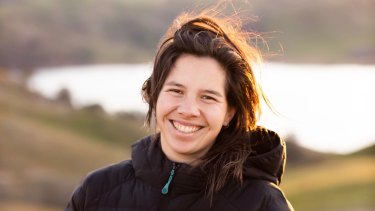 Carolina Merriman is chair of the Yass branch of NSW Young Farmers.

Merriman, the chair of the Yass branch of NSW Young Farmers, said she was not concerned about a longer-term threat to export markets.

“Australia is well known for being the most humane and producing some of the better quality stock around the world. It is something that the other countries would take into consideration,” she said.

“At the end of the day prices fluctuate. If you want quality you have to pay for quality.”

A spokesman for the Australian Department of Agriculture said it was mindful of the difficulties experienced by importers, traders and consumers due to the high price of beef and live cattle.

“The industry understands the importance of beef price stability for Indonesian consumers, and has been working with Indonesia partners to identify efficiency improvements, including improving productivity and removing technical and regulatory barriers,” he said.