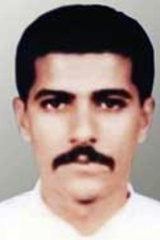 Al-Qaeda’s No. 2 Abdullah Ahmed Abdullah was killed by Israeli operatives in Tehran.Credit:Internet

The ministry issued the denial to Iranian reporters in the wake of an earlier report by The New York Times, which quoted intelligence officials as saying that Abdullah Ahmed Abdullah, who went by the nom de guerre Abu Muhammad al-Masri, was killed by two motorcycle-riding assassins on August 7.

That day was the anniversary of the 1998 attacks on US embassies in Kenya and Tanzania, which killed 224 people. Al-Masri was accused of being one of the masterminds of the attacks.

The killing of al-Masri and his daughter was carried out by Israeli agents at the behest of the United States, the Times reported.

Saeed Khatibzadeh, a foreign ministry spokesperson, denied "any presence of al-Qaeda" members in Iran. And he warned American media outlets "not to fall for the trap of Hollywood scenarios fed to them by American and Zionist officials," according to the ministry's website.

Al-Masri, who was about 58, was one of al-Qaeda's founding leaders and was thought to be first in line to lead the organisation after its current leader, Ayman al-Zawahri. The FBI had offered a $US10 million reward for information leading to his capture.

Al-Masri's presence in Iran was surprising given that Iran and al-Qaeda are bitter enemies. US intelligence officials said al-Masri had been in Iran's "custody" since 2003, but that he had been living freely in Tehran since at least 2015.

In its statement Saturday, Iran's foreign ministry accused the US and Israel of leaking false information to the news media "so they don't have to take responsibility for the murderous actions of this terrorist group and other groups".