Leading Senior Constable Paul Gosling has spent 24 years of his policing career on Victoria's roads, but the past 123 days were some of the most "bizarre and strange" he has had on the job.

Almost every day for the past four months, the state highway patrol officer helped man checkpoints at the so-called "ring of steel" which divided Melbourne from the rest of the state. 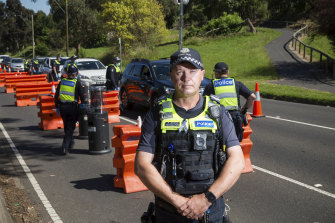 The checkpoints were put in place in early July as restrictions stopping Melburnians from leaving the city were introduced in order to minimise movement and stem the spread of coronavirus as cases surged. The travel restrictions were removed at 11.59pm on Sunday.

Leading Senior Constable Gosling said it was an unusual experience to be manning checkpoints and preventing people from travelling to regional Victoria.

"It was completely different to what we normally do. Here we are essentially checking people for moving around the state. Completely bizarre, it really is," he said on Monday.

"But we were enforcing what the Chief Health Officer set out as to what the requirements would be to keep the virus from moving through the whole state."

Like many other officers, it was a welcome move for Leading Senior Constable Gosling, who had been working at the Longwarry and Lang Lang checkpoints in the city's south-east.

"I've been there every single day basically. Ever since the ring of steel was put in place, I was on that very first night shift when we started. Sunday was the last one for me, which was good," he said.

"Because it’s been so long, it is a relief."

Victoria Police could not confirm how many people were fined at the checkpoints, but said that over the four months, police and Australian Defence Force personnel completed 2,659,060 vehicle checks.

The first permanent checkpoints were set up on July 9 at Little River, Bacchus Marsh, Gisborne South, Kalkallo, Coldstream, Longwarry and Lang Lang, before an additional permanent checkpoint became operational in Frankston on Peninsula Link on October 19.

About 10 to 12 police officers and ADF personnel manned the checkpoints 24 hours a day, on 10-hour shifts.

Despite a few highly-publicised confrontations between police and members of the public at checkpoints, Leading Senior Constable Gosling said the community by and large had been "astounding" in their generosity and patience. 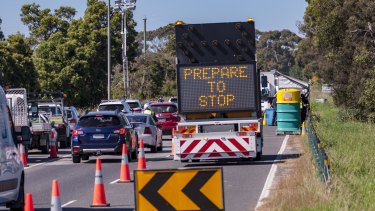 Traffic at the Lang Lang checkpoint at 9.30am Monday. Credit:Eric Eichin

As he returns to road policing, he says he won't forget the experience anytime soon.

"It was just a bizarre set of circumstances that led to what we had to do."

On the other side of town, the creation of the checkpoints saw father-son policing duo Damian and Xavier McKeegan work together for the first time ever.

"There are not too many opportunities where you get to work side by side with a family member," said Damian, a detective of 30 years. "It was an enjoyable day, it was something different from the norm."

But Xavier, 23, who left the academy 18 months ago, said he would not miss the checkpoints now they were gone, particularly on the days when there was bad traffic.

"When you see you have a roadblock shift on your roster you're not overly thrilled about it. Because you're standing in the cold most of the time."

Victoria's police union welcomed the easing of restrictions on Sunday, saying it came as a relief to their members who "for a large part of this year, have been placed in the unenviable position of upholding restrictions which have impacted the lives of so many Victorians".

"Our members look forward to moving off checkpoints and back into police stations and communities," it said.

Victorians reported congestion at some of the checkpoints on Monday morning, as police worked to dismantle the infrastructure they had installed.

A police spokeswoman said they were in the process of packing down the sites. As there are police on the side of the road, cars are required to slow down to 40km/h if the lights are on, which has caused some delays.

The most important news, analysis and insights delivered to your inbox at the start and end of each day. Sign up here.