Keir Starmer blasts inflation-busting pay rise for MPs taking their salary to more than £85,000 saying ‘this year of all years’ the money should go to key workers instead

Sir Keir Starmer today blasted plans for MPs to get an inflation-busting pay-rise int he middle of the coronavirus economic crisis.

The Labour leader said that politicians should not receive what is likely to be a 4.1 per cent raise that would take their salary to around £85,000.

He called for the cash to instead be given to key workers in ‘this year of all years’ after their long hours of dedicated work throughout the pandemic.

The independent body which sets MPs’ salaries has proposed continuing to link their pay packets to wage growth in the public sector, which could result in a pay rise of more than £3,300.

Sir Keir told LBC radio: ‘We shouldn’t have it.’ 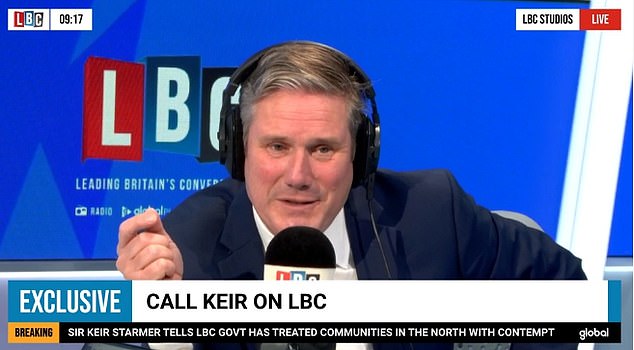 The Labour leader said that politicians should not receive what is likely to be a 4.1 per cent raise that would take their salary to around £85,000

The Labour leader said the decisions had been ‘parcelled out to an independent body so that MPs don’t decide for themselves what they get paid, but that’s mitigation, it’s not an excuse’.

‘I think this year of all years, people would say that money, if it’s available, should be spent on key workers, those who’ve been on the front line through this pandemic.’

The Independent Parliamentary Standards Authority (Ipsa) is consulting on the scheme, which would use October’s three-month average public sector wage growth as the benchmark.

Although the exact figure is not yet known, September’s data would give MPs a 4.1 per cent increase and Ipsa acknowledged that whatever the figure ends up being ‘it is likely to exceed the rate of inflation’.

Sir Keir added that there should be a cross-party discussion about what to do ‘because I suspect there’s lots of MPs that feel it just isn’t right’.

Richard Lloyd, Ipsa’s interim chairman, said the body has a statutory duty to review MPs’ pay in the first year of each parliament.

‘Given the huge economic uncertainties arising from the coronavirus pandemic, we do not think it is right to depart from this approach now,’ he said.