‘Yet another excuse to miss PMQs’: Labour MP Ruth Cadbury deletes tweet criticising Boris Johnson for attending the birth of his son – as ex-party spin chief Alastair Campbell says the Prime Minister should STILL have been in the Commons

A Labour former shadow minister sparked uproar today when she branded the birth of Boris Johnson’s new son ‘yet another excuse’ to avoid scrutiny from MPs.

Ruth Cadbury, 60, tweeted minutes after the birth of the Prime Minister’s first child with fiancee Carrie Symonds was revealed this morning.

Mr Johnson attended the birth of his son early this morning, meaning Foreign Secretary Dominic Raab stood in for the PM at Prime Minister’s Questions.

The change prompted the Brentford and Isleworth MP to tweet: ‘It appears Boris Johnson has just found yet another excuse to miss PMQs.’

But after being branded heartless the MP, once shadow housing minister under Jeremy Corbyn’s leadership, deleted the tweet and replaced it with one saying: ‘So Boris Johnson has a good excuse to miss PMQs today – congratulations!’

It came as former Labour spin chief Alastair Campbell said that the birth at a London hospital this morning was no reason for Mr Johnson to miss PMQs. 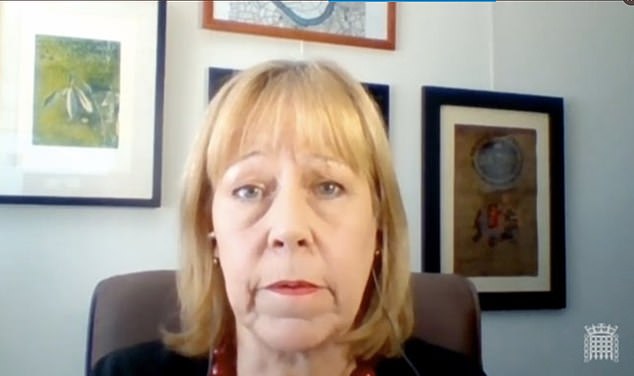 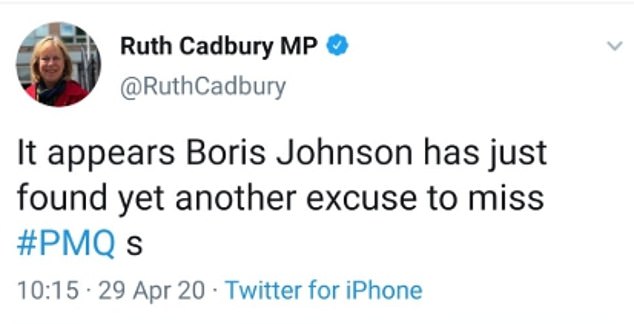 Ms Cadbury changed her tweets in quick succession this morning

Mr Johnson was to have been by his 32-year-old fiancee’s side throughout the labour in the early hours of this morning and thanked ‘the fantastic NHS maternity team’ who brought their son into the world.

The safe arrival of their child, Carrie’s first and officially Boris’s sixth, has come as a shock because Miss Symonds was expected to give birth in the early summer, although a due date was never confirmed.

Mr Johnson said in early March that he would likely take his two-week paternity leave when their child was born.

Downing Street said today he would take some time off later in the year as he scrambles to get a grip on the coronavirus crisis.

There are also concerns that key decisions over the lockdown and how to ease Britain out of it will be delayed because of the Prime Minister’s new baby.

Mr Campbell, who was Labour’s chief spin doctor during Tony Blair’s term as prime minister, hit out at the PM’s decision to miss PMQs.

A new born baby may be a better excuse than most for missing PMQs (though he should still be doing it),’ the former journalist wrote.

‘I suspect we are going to see an awful lot of excuses in future. Boris Johnson has a habit of avoiding proper scrutiny.’

Prime Ministers of all parties are known to put a lot of effort into their PMQs performances, often spending the morning before the noon performance in preparation for it. 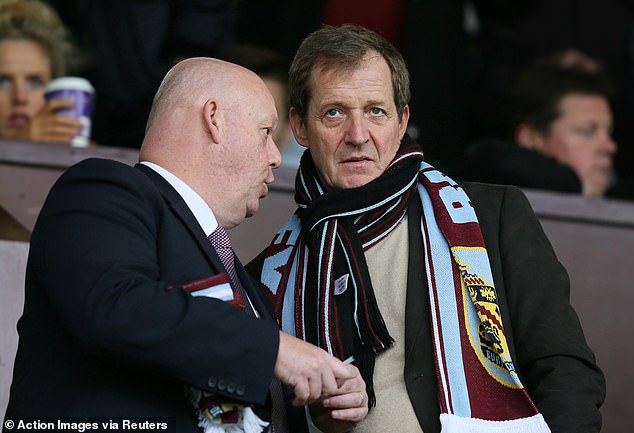 Announcing the birth of their son, who has not been named yet, Mr Johnson’s spokesman said: ‘The Prime Minister and Ms Symonds are thrilled to announce the birth of a healthy baby boy at a London hospital earlier this morning. Both mother and baby are doing very well. The PM and Ms Symonds would like to thank the fantastic NHS maternity team.’

No 10 has not revealed the hospital the baby was born in – although St Thomas’, where Mr Johnson was in ICU just over a fortnight ago, is the closest to Downing Street. It was previously reported that Carrie had wanted a home birth but these have largely been suspended by the NHS because of coronavirus.

The couple got engaged while holidaying on the exclusive Caribbean island of Mustique over the new year and announced they would marry and were having a baby on February 29, days after the PM’s divorce from Marina Wheeler was confirmed.