A 22-year-old who was killed on a football pitch by a ‘moped gunmen’ in north London has been named.

Imani Allaway-Muir died in an apparently targeted attack in a children’s playground on Saturday in Islington.

A post mortem is due to take place later this week. There have been no arrests.

DCI Neil John, of Specialist Crime, said: ‘This was a shocking incident that happened in broad daylight and we believe many people in and around Roman Way would have heard a number of gunshots.

‘I would urge anyone that has any information, or video footage, of the area at the time of the incident to contact police.

‘The family of a young man have been left devastated by his death and my team of detectives is working relentlessly to identify and arrest those involved.’ 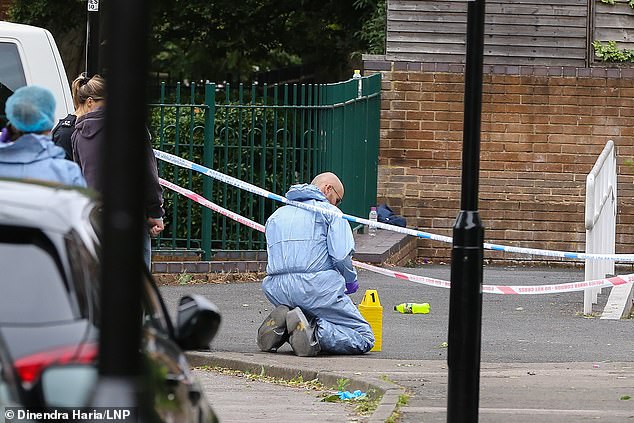 Scenes of crime officers have begun a forensic examination of the scene on Roman Way, Islington where a man in his 20s was shot dead earlier this afternoon 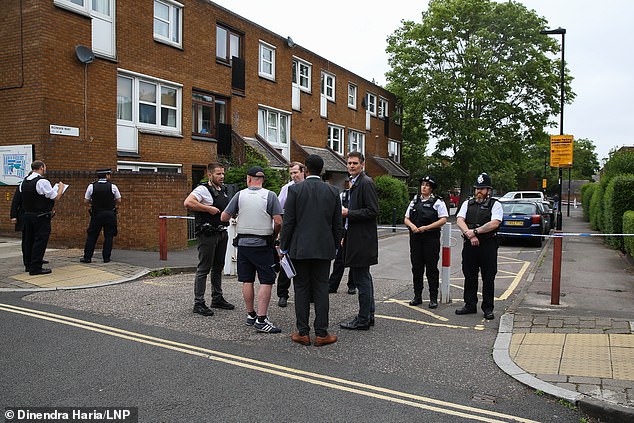 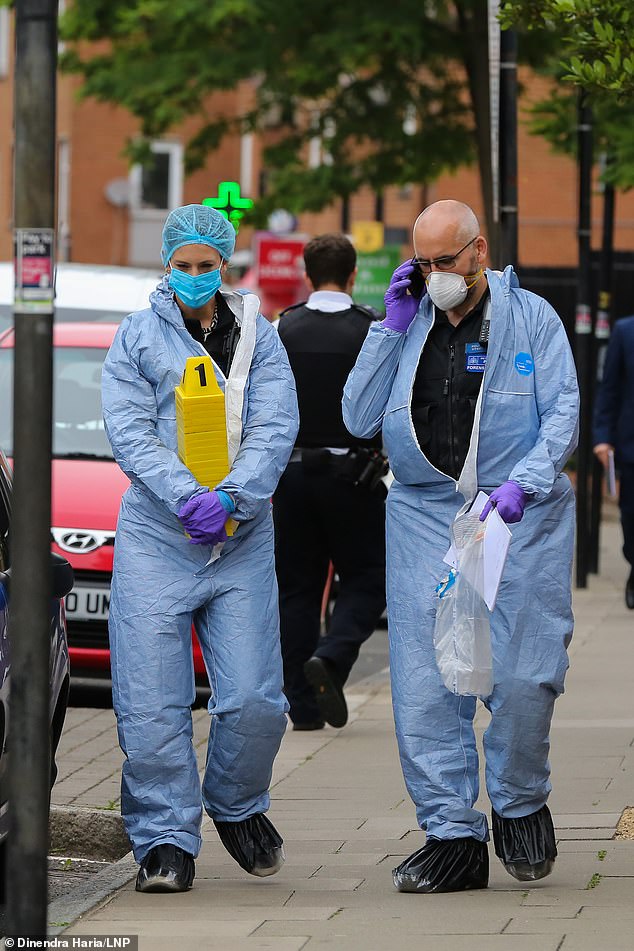 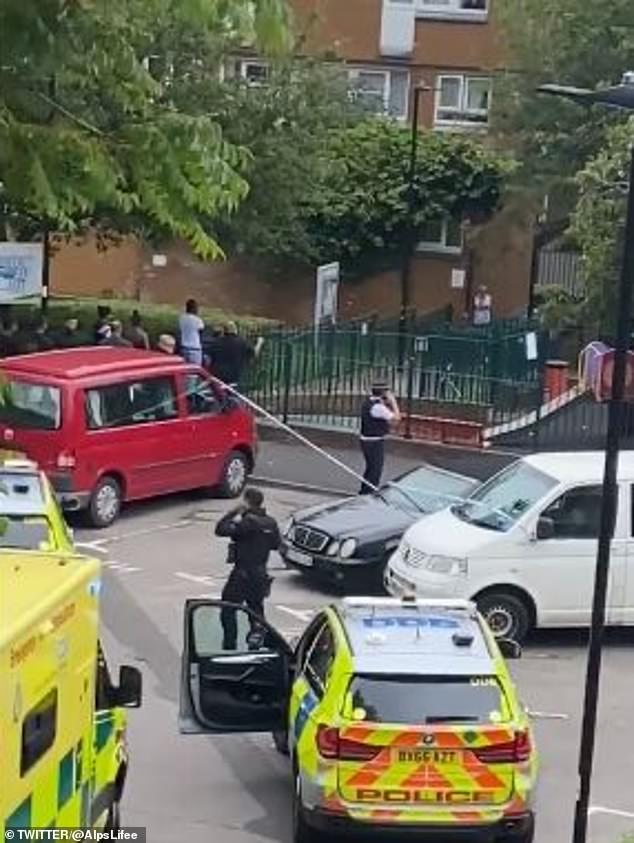 A man in his 20s was shot and killed on Roman Way, Islington at 3.20pm today

One witness, who saw the murder from his window said: ‘I heard around seven shots, ran to window, and a guy on a bike or moped rode off.

‘He was looking back. When I looked to the park, I could see a guy staggering then fell.

‘That was it then police came. They are taping the area now… No one’s allowed to leave.’

The witness who heard gunshots from his window in Islington added: ‘There’s always crime around here, the shooting is shocking, but not much of a surprise.

‘It’s not nice though, especially near the local park.’

Another source told The Sun: ‘Some of the children carried him to the side and tried to help him.

‘The guy who was killed is well-known in the area and is the eldest of five brothers.’

The investigation is being led by detectives from Specialist Crime (Homicide).

A full forensic examination is taking place at the scene searching for evidence while officers are canvassing the area looking for witnesses.

Nobody has been arrested yet in connection with the investigation. 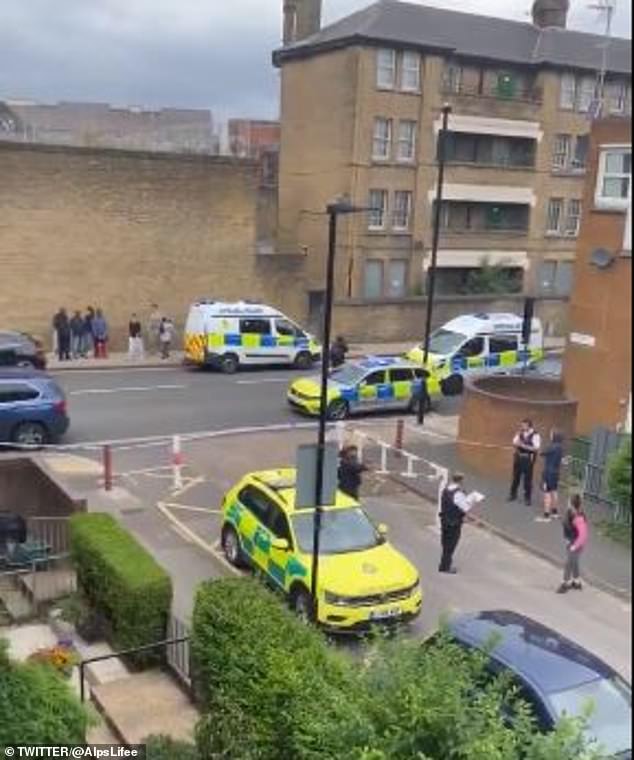 Police are especially keen to talk to anyone who may have been driving along Roman Way around 3.20pm and have dash cam footage.

Scotland Yard said: ‘The public have a huge role in helping to both prevent and detect crime. We need to hear from anyone who has information about this crime, or about someone they suspect to be carrying a weapon or involved in organised crime.

‘If you don’t want to speak to the police, contact Crimestoppers on 0800 555 111. They are a totally independent charity and you remain 100 per cent anonymous, they never ask your name and they cannot trace your call, your IP address or device you use.’ 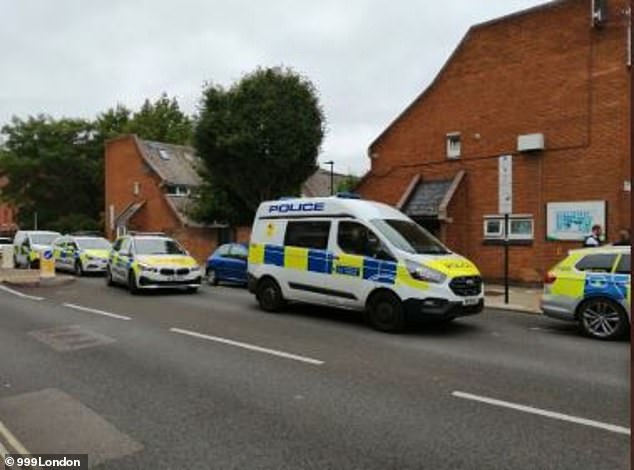 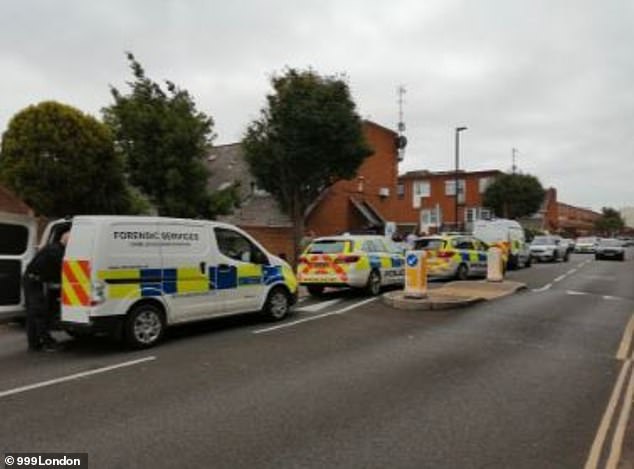 A man from the area, who did not wish to be named, said he ‘knew the victim well’, having heard their identity from a friend.

‘I’ve grown up around the Caledonian Road for the majority of my younger life, I stopped hanging around on the streets in around 2016 but I have a lot of connections to the area still.

‘He was just one of the younger kids from my area who I knew from my time in hanging around on the Caledonian Road/Bemerton estate, I saw him a few weeks ago near Paradise Park.

‘It’s very sad and I feel for his family… but this young man is probably the 10th person I know from the borough to die due to violence so it’s hardly a shock anymore.’

‘It’s more shocking that he was shot rather than stabbed if anything.

‘The Caledonian Road has a huge problem with gang rivalries… the rivalries are not dying out as the generations change, they are getting worse and I really don’t have any answers on what we can do to change that.’

Following the murder, senior officers have placed a Section 60 order over large parts of Camden and Islington giving them additional stop and search powers.

‘We assumed it was probably just fireworks because we never hear gunshots here. But we’ve both fired guns before and this sounded like a handgun, not fireworks,’ the 46-year-old told PA.

‘I went out on the balcony but couldn’t see anything so just came back inside and called my parents on FaceTime to say happy 4th of July.’

While on the call, Ms Watson, who has lived in the area for 12 years, then heard a helicopter and sirens and saw an air ambulance arrive nearby.

‘I must be still in shock that it’s happened. I don’t know what I feel,’ she said.

‘I’ve just been telling my family how safe the UK is from gun violence compared to the US… my thoughts are with the family and friends of the young man that was killed. How awful.’

Emily Thornberry, MP for Islington South and Finsbury, has expressed her condolences for the family of the victim.

Ms Thornberry, who is also the shadow international trade secretary, said in a tweet: ‘There are shocking reports of a fatal shooting this afternoon on The Westbourne.

‘My thoughts are with the victim’s family and friends and local residents in whose midst this terrible event occurred.’

She urged anyone who witnessed the incident or who has video or images to call police on 101 quoting ref CAD 4432/4 July.