We haven’t been able to enjoy much of a reprieve following the rise and fall of Omicron infections with the subvariant already on the rise, plus the La Nina weather forcing more of us indoors out of the rain or humidity where transmission risk is higher.

With fewer restrictions in place, we can expect to see more immediate changes in case numbers following any shifts in the impact of this coronavirus. There is a natural uneasiness about whether higher infection rates might trigger the return of more wide-sweeping restrictions, so it is important to consider how the threat of the virus has changed, and what that means for us. 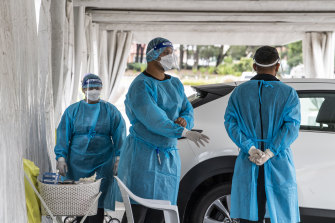 There is concern that restrictions will again be imposed if COVID cases continue to rise.Credit:Louise Kennerley

As epidemiologists we talk about the three factors that change the impact of a disease; changes to the host (us), to the agent (virus), and to the environment (for example ventilation, social, and behavioural factors affecting exposure risk).

Our vulnerability to severe disease has changed dramatically over the last two years with the development of coronavirus-specific immunity. For some, this started early with infections from the original variants, or as part of Alpha, Kappa and then Delta outbreaks, or infections acquired overseas. The arrival of Omicron took our infection rate to new levels, exceeding 580,000 active cases in Victoria and NSW alone back in mid-January.

Thankfully, compared with the first wave of Omicron in the eastern states, we are seeing fewer people hospitalised now. During the initial Omicron surge, when Victoria and NSW reached active case number equivalent to today’s, there were 50 per cent – 100 per cent more people in hospital compared with now, and four times as many in ICU and between twice and four times as many on ventilators.

The BA.2 variant now responsible for an increasing proportion of cases is believed to beas capable of causing severe disease, even in vaccinated people, as BA.1, the Omicron subvariant we first encountered. This demonstrates the effectiveness of the booster in further reducing the risk of hospitalisation as booster rates for both strains are higher now than during the January peak, especially among the most vulnerable. Victorian data from January showed we were 7.6 times less likely to end up in ICU once we had our third dose compared with just two. 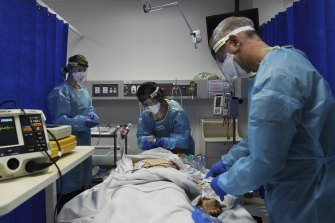 The COVID booster has been shown to reduce the number of people requiring hospitalisation.Credit:Kate Geraghty

Omicron cases were initially concentrated in our young adults who generally have a lower risk of ending up in hospital, so that makes the difference in hospital figures even more striking. Young adults tend to have the highest exposure risk of us all given their work and socialising patterns, and therefore the highest risk of passing the virus on to others once they themselves acquired an infection. In January, this resulted in the rapid rise in reported cases, sometimes doubling within two days, so the infection rates in this groups matter to us all.

In Denmark, they have been living with both Omicron strains throughout the Omicron wave, and they found that the proportion of infections that were re-infections was very small, one in ten thousand, and only a third of these were BA.2 infections following BA.1, and were usually in unvaccinated younger people. So many of our young adults have added protection now, and that helps protect all of us from a rapid rise in cases.

While our immune protection has fundamentally changed over the last year, so too has the virus. The virus has morphed and our immune response isn’t as effective, whether that immunity was provided by prior infection or vaccine. This is mainly seen in the decreasing protection from any infection, but thankfully coronavirus immunity has substantially reduced the risk of serious illness across all variants. However, the booster is needed to provide the high level of protection, of over 80 per cent, it did with Delta and earlier variants.

The most changeable element in our environment is the weather. On Thursday we heard from the Bureau of Meteorology that La Nina has stalled, so the wetter than usual weather will persist, bringing some of our winter concerns forward as people spend less time outside. We are not yet dealing with other cold and flu infections adding symptom confusion, so if we had to have BA.2 add to our challenges, better it be now than in a few months.

Meanwhile, we should do what we can to keep slowing the virus by taking those extra steps to both identify infections and to protect ourselves and our contacts from catching the virus. Masks still help, whether required by rules or not, and the more of us who wear them when mixing indoors, the slower the rate of spread, and the fewer people might end up in hospital. If we keep those numbers down, then remaining rules can be reviewed, and there will be no need to reintroduce wider-reaching rules.