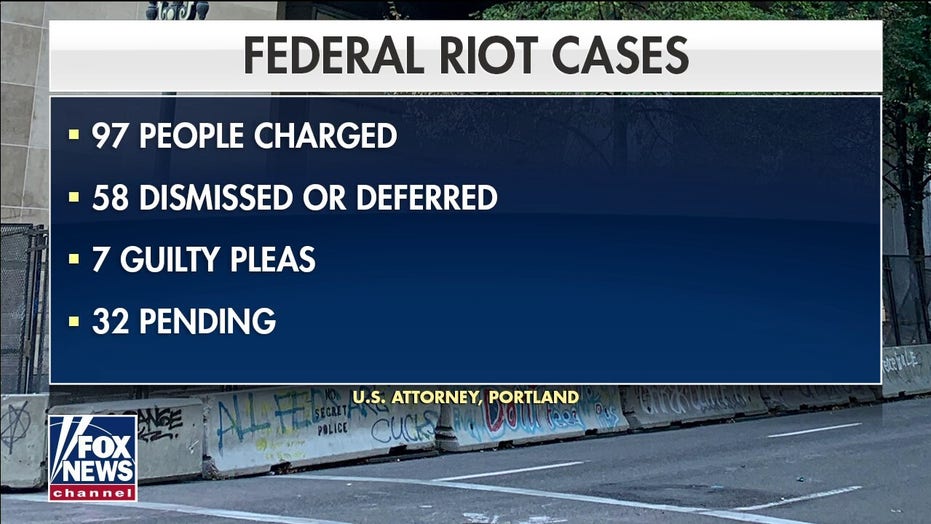 David Bouchard admitted he put a Customs and Border Protection officer in a chokehold. Charles Comfort was indicted by a grand jury of civil disorder for twice charging at Portland Police Bureau officers and hitting them with a makeshift shield then kicking a third officer while being arrested. Both men faced federal charges stemming from their actions during a summer of more than 100 straight nights of often violent protests in Portland. But Bouchard and Comfort are among dozens of Portland federal arrestees whose cases were dismissed or are being deferred without so much as a day behind bars.

Between May 25 and Oct. 7, the U.S. Attorney’s Office in Oregon filed federal charges against 97 people connected to the Portland unrest. Since then 58 of those cases have either been dismissed outright or are on track for dismissal through a deferred resolution agreement. Thirty-two cases are still pending, with many likely to also end in dismissal according to sources. Seven people have entered guilty pleas.

Of those pleading guilty, only one person is headed to prison, and he was caught red-handed. Security video shows Edward Schinzing setting fire to the Justice Center with his shirt off and his name tattooed on his back. A plea deal calls for Schinzing to serve the five-year mandatory minimum sentence for arson.

“It’s offensive to all the men and women who risked their lives in Portland for 90 to 120 days or even longer in some cases, being attacked night after night after night,” said Chad Wolf, the acting Secretary of Homeland Security under President Trump.

“The prosecutors in that office, the number of prosecutors, that support, even the courthouse system, isn’t really set up to handle those sorts of numbers,” said Little.

Lisa Hay, the federal public defender in Oregon, has a slightly different take on the high number of cases being dismissed.

Of the 31 deferred resolution agreements (DRA) signed by the U.S. Attorney’s Office in Portland, 19 were for people charged with felonies and most were for alleged assaults on federal officers who were sent there to protect the courthouse and other federal buildings that were under attack nightly.

Neither Williams nor Asphaug would comment for this report. Kevin Sonoff, public affairs officer for the U.S. Attorney’s Office in Oregon, issued a statement which reads in part, “Dismissals are very case-specific and based on our assessment of available evidence. If we do not believe we can prove a charge beyond a reasonable doubt, we will dismiss the case.”

Wolf said Williams didn’t want to file many of the criminal charges in the first place. He said Williams pushed back on pressure from the White House and Attorney General Bill Barr arguing that protest is normal in Portland and filing federal charges will only inflame the situation.

Wolf said his urging of a tougher response has been vindicated. DHS eventually pulled most of the federal officers out of Portland leaving local police and prosecutors in charge of restoring peace. But sustained calm has not returned to the Rose City. Even with a new president in the White House, the riots and property destruction have continued.

“There’s been a number of statements from Mayor Wheeler here recently that talks about trying to take his city back from the violence and the anarchists,” said Wolf, “and that’s exactly what I told him in July.”