“For the Greek people, a tribute from Picasso,” the artist inscribed on the back of his painting Head of a Woman, which he presented as a gift to the National Art Gallery of Athens in 1946, to honour the nation’s resistance against the Nazis.

So when two thieves stole the painting in 2012, leaving behind empty frames, it was mourned as a national loss.

An investigation failed to turn up the painting – until today. Nine years after the heist, police announced that the Picasso, as well as another famed oil painting, Stammer Windmill by Piet Mondrian, which disappeared from the gallery the same night, had been recovered.

The paintings were found in a crypt in Keratea, a town in East Attica, on Greece’s mainland. The police have arrested and are interrogating a suspect at the Attica General Police Headquarters, according to media reports.

Police and museum officials were unavailable for immediate comment on the recovery. 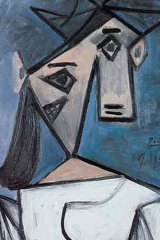 Through what ARTNews described as a “stunning tip,” police learned that the Picasso may still be located in Greece – and that it was possibly put up for sale for $US20 million ($26 million) in the Greek illicit market. But the high-profile nature of the artwork meant there were no buyers, the outlet reported.

The artworks were stolen in a “near-perfect” seven-minute heist, ARTNews reported.

First, throughout the night, the thieves set off the museum alarms until guards disabled the system. Then, at 4.30am, they entered the gallery through an unlocked balcony door and swiftly stripped the paintings from their frames. They set off an alarm, and were only just slipping away by the time guards arrived. In a chase, they dropped Landscape with a farm by Mondrian, but made off with the two oil paintings and a 16th century drawing.

Police said the theft occurred on the final day of an exhibition titled Unknown Treasures that included prints and etchings by Duerer and Rembrandt.

In the wake of the theft, the museum overhauled its security practices.

The stolen Picasso is a cubist female bust, and the recovered Mondrian a 1905 representational oil painting of a riverside windmill by the Dutch painter who became famous for his later, abstract linear works.