No face masks rule from July 19: Mouth guards will become voluntary as Covid curbs are axed…. and even nightclubs can reopen with NO testing

Face masks are set to be made voluntary under plans to end most coronavirus restrictions on July 19.

Boris Johnson is pushing for the lifting of mask laws in almost all settings to help return life to ‘as near normal as possible’.

Key social distancing measures, including the one-metre rule, the rule of six and the 30-person limit on the size of outdoor gatherings, are also set to be scrapped on the new ‘Freedom Day’. 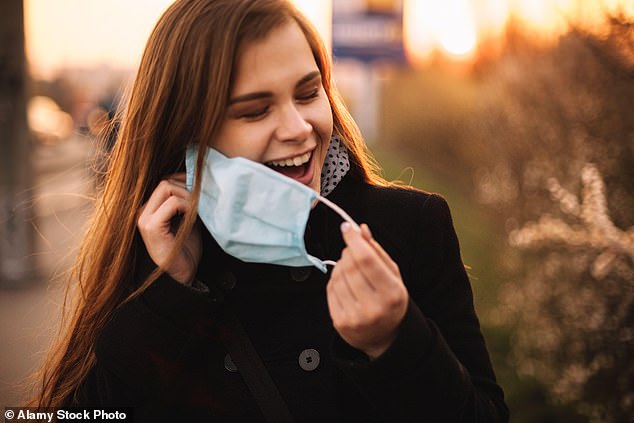 Relief: Face coverings may be scrapped for shops and public transport 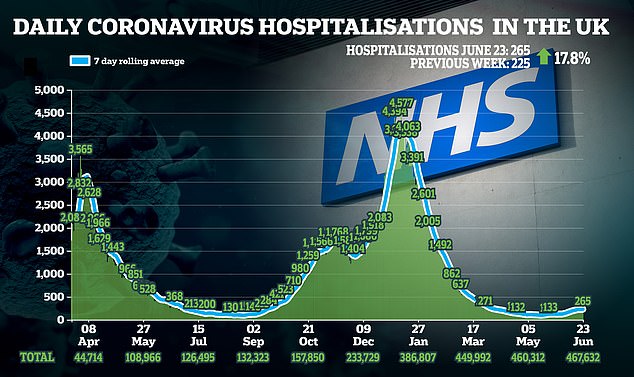 The Mail revealed today that ministers have shelved plans to require mass events such as festivals to use Covid passports to control entry.

And last night it emerged that even nightclubs may be allowed to reopen on July 19 without the need to test customers at the door, as part of a new ‘freedom plan’ that could be published by the Prime Minister as soon as next week. The proposals reflect growing confidence in Government that the vaccination rollout has severely weakened the link between infections, and hospitalisations and deaths.

Covid cases are continuing to surge across the country.

Yesterday, 26,068 new cases were recorded – a rise of almost 70 per cent in a week, and the highest figure since late January. 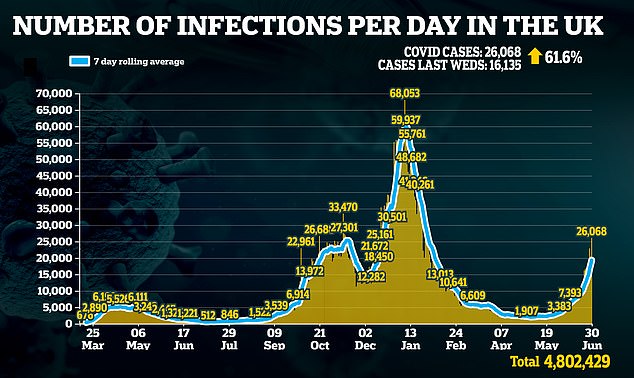 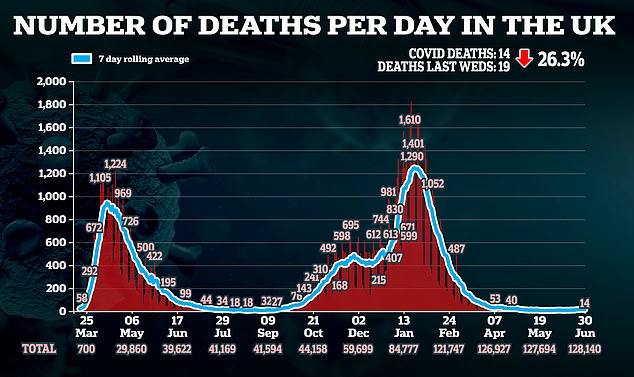 By contrast, daily hospitalisations due to Covid were running at 263, up by just 6.4 per cent in the last week and far below the January peak of 4,579 in a single day.

Covid-related deaths have also risen slightly, but averaged at just 16 per day over the last week, with 14 yesterday.

Chief medical officer Chris Whitty told the Cabinet this week that the rise in Covid cases was not putting unsustainable pressure on hospitals in England.

A source said Professor Whitty and chief scientific adviser Sir Patrick Vallance had suggested ‘we should get as much open this summer as possible before winter, which will be much more difficult’. Professor Whitty, one of the architects of lockdown, was said to be ‘cautiously optimistic’ that rules could now go – but warned that the winter would be ‘challenging’ for the NHS. 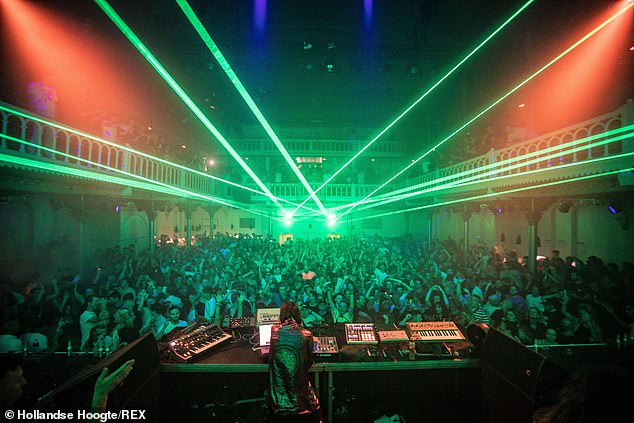 Government sources said ‘final decisions’ had not been made, but acknowledged that Mr Johnson is pushing to scrap as many rules as possible

The Prime Minister has ordered officials to prioritise the removal of the one-metre rule, which affects hospitality and is viewed as the most economically damaging measure still in place.

But ministers are also increasingly confident that face masks will not be required in shops and on public transport, although they may remain mandatory in hospitals. Sources said it was possible that travellers could still be encouraged to voluntarily wear masks on public transport even after the legal restrictions have been lifted.

Asked whether the requirement to wear a mask in shops and offices would go on July 19, the Prime Minister’s official spokesman said: ‘We aim to remove as many restrictions as is safe to do so.’

Government sources said ‘final decisions’ had not been made, but acknowledged that Mr Johnson is pushing to scrap as many rules as possible.

Some officials remain cautious about scrapping mask laws at a time when new infections are soaring, and Sir Patrick has previously warned that the rules may be needed again this winter, even if they are ditched next month.

A review of social distancing rules by Michael Gove is said to have concluded that even nightclubs, which are deemed so high risk they have been unable to open since March last year, would get the green light to open their doors without restrictions.

A source said Mr Gove had decided it would be ‘too much hassle’ to ask late-night customers to take a Covid test to go dancing.

But Sage committee scientist Professor Stephen Reicher warned that ministers were in danger of making ‘the same mistakes as last summer’ when indoor hospitality was reopened in July, accompanied by a big back to work push, leading to rocketing infections.