Wellington: The New Zealand economy shrank by a record 12.2 per cent in the second quarter of 2020 due to a strict coronavirus lockdown.

Statistics New Zealand released figures on Thursday showing GDP had fallen far more than ever previously recorded and signalling the nation of 5 million people is officially in recession for the first time in 11 years. On an annual basis, GDP fell by 2 per cent. 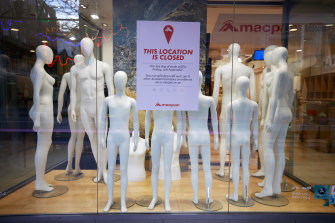 A shop remains closed in Auckland because of a second wave of coronavirus. The NZ economy will endure a shallower recession than previously expected.Credit:Bloomberg

But forecasts indicate activity is bouncing back: economists said the decline would likely be followed by a record increase in economic activity during the third quarter as many businesses get back to work. And forecasts released by the Treasury this week predict unemployment would peak at 7.8 per cent, lower than earlier predictions of nearly 10 per cent.

Many countries have seen large drops in economic activity due to the virus.

When the second quarter began in April, NZ was in a full lockdown, which was gradually eased until all restrictions were lifted in June. Auckland temporarily reentered a lockdown last month due to a new outbreak of the virus, with the impact of that to be reflected in the third-quarter numbers.

The second-quarter figures showed construction activity declined by 26 per cent, manufacturing fell by 13 per cent, and household spending was down 12 per cent when compared with the previous quarter.

Kiwibank Chief Economist Jarrod Kerr said there were few surprises in the numbers.

“You lock up the economy, activity falls,” he said in a statement. “The focus must now turn to the recovery. And the current quarter looks pretty good. It’s the path we take over the next three years that needs attention.”

Kerr predicted GDP would jump by 10 per cent in the third quarter, but said more needed to be done over the medium term to return the nation to full employment.

Finance Minister Grant Robertson said the lockdown was necessary to save thousands of lives and get on top of the virus so the economy could bounce back faster. He said the fall in GDP was better than initial Treasury contraction forecasts of 16 per cent.

The government of Prime Minister Jacinda Arden has pumped billions of dollars into the economy to sustain activity and minimise unemployment. As a result, net government debt was expected to shoot up from just over 20 per cent of GDP before the pandemic to 54 per cent by 2023.

The country continues to pursue a bold strategy of trying to eliminate the virus altogether rather than just contain its spread. It has reported around 1800 cases and 25 deaths since the start of the pandemic.