It was a fitting tribute for television giant and 60 Minutes executive producer Gerald Stone's memorial service to be a polished production at TCN Studio 22 in Willoughby, where it all started.

There were lights, cameras and an all-star cast to remember the man who steered the groundbreaking current affairs show from a "flop" to essential viewing every Sunday night at 7.30pm.

The original journalist line-up was reunited (now with a few grey hairs) in the form of Ian Leslie as MC for the service, Ray Martin, Jana Wendt and, albeit beamed in by video, George Negus. 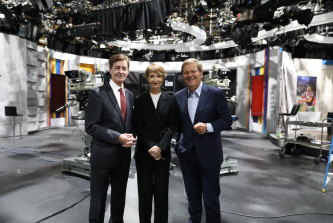 Gerald Stone, born in Ohio developed an early interest in journalism as a six-year-old absorbing reports of World War II on the family radio. His first job was in 1957 as a copy boy on the New York Times, but in 1962, in the shadow of the Cuban missile crisis, the Stone family gained an assisted passage to the safer shores of Australia. 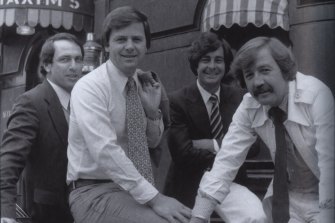 A photo from the book ‘ Compulsive viewing : The Inside Story of Packer’s Nine Network’ by Gerald Stone.(L-R): Gerald Stone in 1979 with his original “60 Minutes” reporting team, Ray Martin, Ian Leslie and George Negus. The Maxim’s in the background is in Melbourne, not Paris.

Next in his career was the Daily Mirror and covering the Vietnam War as a correspondent. He was a reporter on This Day Tonight and producer of ABC documentaries and then network news director for Nine. 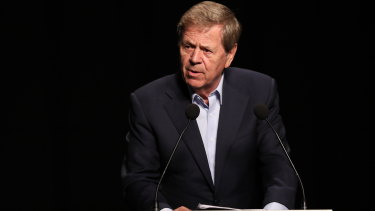 In 1978 Kerry Packer called him to his office for what journalist Ian Leslie said was "an internal examination without anaesthetic" to be given the job of executive producer of the flagship 60 Minutes.

"He said Kerry's edict was: 'I don't give a f*** what it takes, just do it and get it right.' Kerry had found the right man, this yank was was as tough as nails, steel ran through his veins," Leslie said. 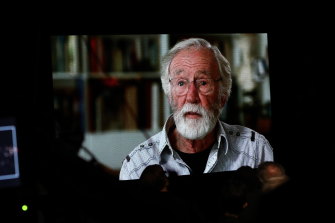 Journalist Ray Martin told the 50 or so attending under COVID-19 restrictions that Stone took 60 Minutes forward to become a current affairs blockbuster that would change the rules. 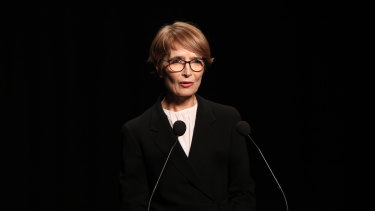 George Negus said Stone was not just an experienced media professional, his judgement for what staff should and shouldn't do was impeccable. 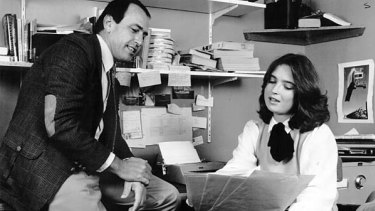 "Until 60 Minutes, most of this country's international coverage came almost exclusively from the US and UK," he said.

Addressing Stone's widow, Irene in the front row, Mr Negus added: "I am not sure if you guys realise my own father died at 26 when I was only four years old. I never really had a father figure, I didn't really have a grandfather figure either and so for the period I found myself working with Gerald was the closest I felt to being fathered." 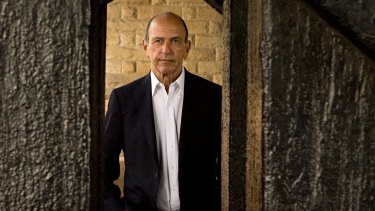 Jana Wendt, at the age of 24, was the youngest and only female on the 60 Minutes block. She told how she was driven by Stone to meet Packer at his mansion.

"Gerald took a very big chance on me in the early 80s," she said. "He was crazy and brave enough to gamble on a largely unknown, let's face it, girl, and I was naive enough to think I was up to the task.

"We were headed there to seek Mr Packer's approval for Gerald's choice. Although I am absolutely sure Gerald would have been on edge, he did not show it. His demeanour was even and composed and his beautiful dark eyes were alert.

"I, on the other hand, his 24-year-old charge, was overwhelmed. Knees knocking like a country cousin on a first visit to the big city, in this case to the hub of Australian network television. [Gerald] looked after me just like he would on many, many other occasions.

"He was a powerhouse, a person with this awesome instinctive nous and fabled journalist experience. As dramas of one sort or another arose, it felt some times as though the world was on fire. In these moments it was a pleasure to watch Gerald, he was in command, he made the critical calls and he righted the ship with what I would call imperial style."