PC Keith Palmer’s widow has described feeling ‘let down’ after the Metropolitan Police revealed she was bringing legal action against them over his death in the Westminster Bridge terrorist attack.

The unarmed 48-year-old officer had been guarding the Carriage Gates at the Palace of Westminster, London, on March 2017 when he was stabbed to death by Khalid Masood, 52, during a car and knife rampage.

However an inquest later heard chief coroner Mark Lucraft QC find shortcomings in security after discovering that two armed officers tasked with patrolling New Palace Yard had been nowhere near Carriage Gates for nearly an hour before the attack.

Today Michelle Palmer confirmed that she was bringing the claim against the police and criticised the police force for making it public. 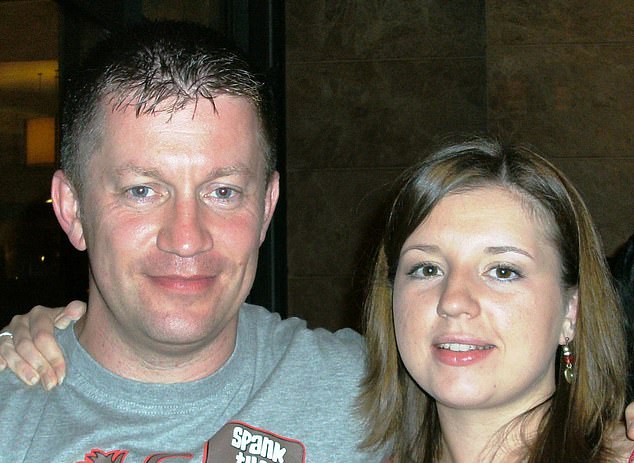 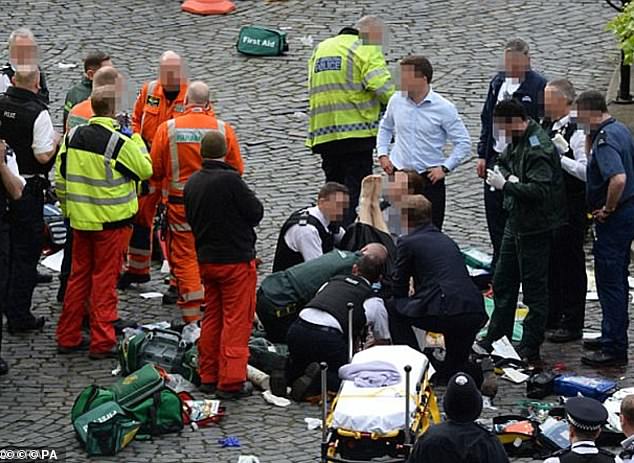 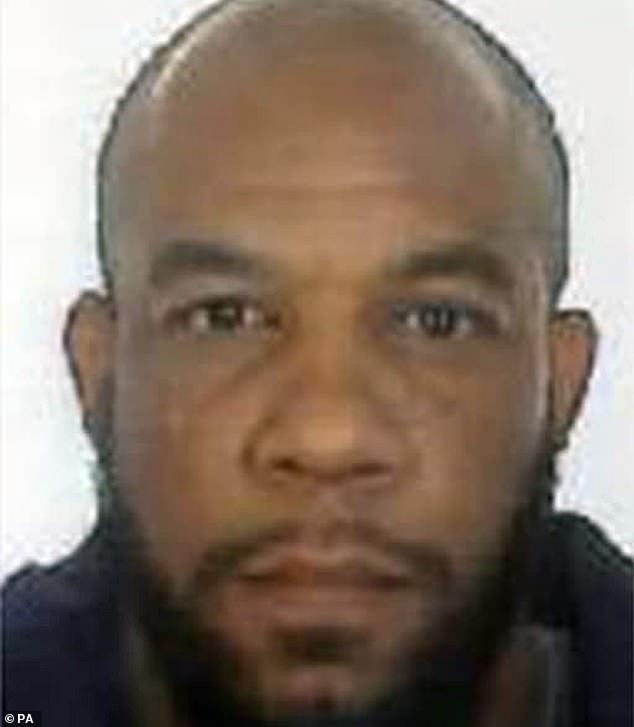 Massod, 52,  who ploughed into pedestrians on Westminster Bridge before crashing his car and entering the Palace of Westminster, was shot by two close protection officers

She said: ‘It was always of paramount importance that this matter remained private, out of respect for me, my daughter and Keith.

‘I am disappointed that the Met have made it public that a claim is being brought. Once more I feel disappointed and let down.

‘This is not the respectful actions I, nor Keith, would have expected from an organisation that he dedicated his life to. It continues to feel as if our wishes are of little importance.’

Speaking after the inquest in October 2018, PC Palmer’s widow said her husband had been left ‘alone, unarmed, guarding an open gate’ when he was killed.

Scotland Yard said in a statement on Monday that the force had received a letter of claim in relation to PC Palmer’s death, but did not comment on who was bringing the action, which was first reported in the Daily Mirror.

Patrick Maguire, lawyer at Slater and Gordon who is representing Mrs Palmer, said: ‘It has always been our position this matter proceed in confidence. It is with regret that the Metropolitan Police have decided to publicly state that a claim is being intimated.’

PC Palmer was one of five people killed when Masood ploughed into pedestrians on Westminster Bridge before crashing his car and entering the Palace of Westminster armed with 2ft-long knives.

After killing four pedestrians on Westminster Bridge, he rammed into the Houses of Parliament and burst out with a carving knife and a hunting knife.

Armed only with a baton and CS spray, PC Palmer was held down by Masood and repeatedly stabbed in the face, neck and back after trying to intervene in his deadly assault.

His body armour did not protect him and he died from his wounds just minutes later while witnesses tried to save him.

Masood was finally shot by two close protection officers who only happened to be at Parliament because they were guarding then-defence secretary Sir Michael Fallon. 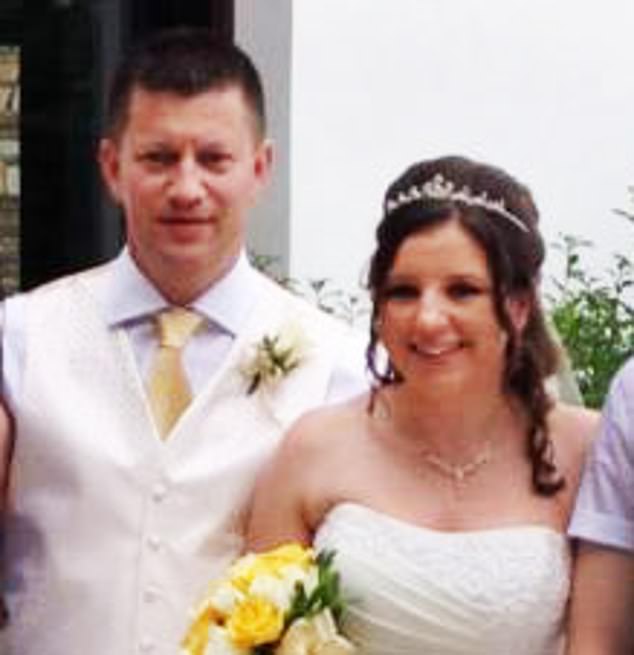 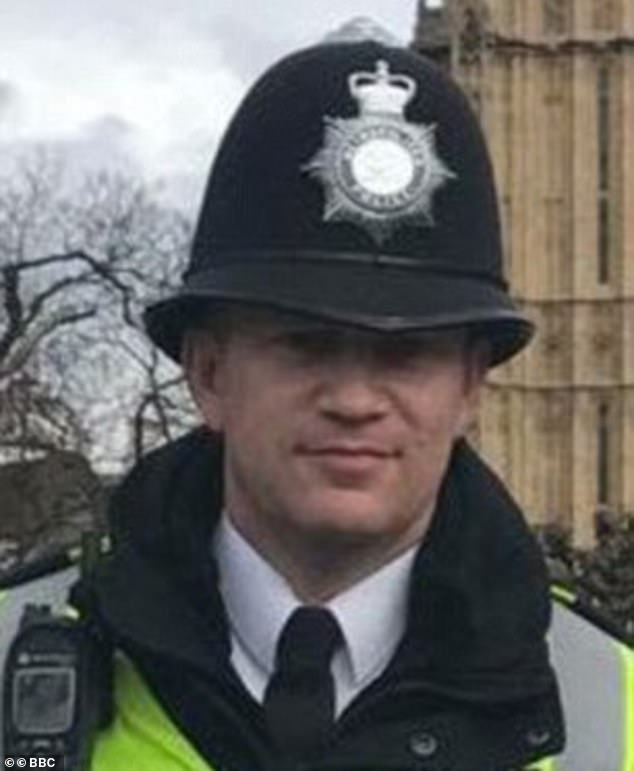 The two armed officers on duty at Parliament on the day of the attack had not gone near the gate for almost an hour beforehand.

They were 80 yards away when PC Palmer was stabbed and could not see the attack unfold. 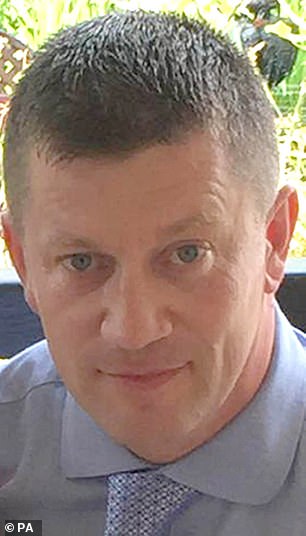 The police officer died from his wounds just minutes later

He said: ‘Due to shortcomings in the security system at New Palace Yard, including the supervision of those engaged in such duties, the armed officers were not aware of a requirement to remain in close proximity to the gates.

‘Had they been stationed there, it is possible that they may have been able to prevent Pc Palmer suffering fatal injuries.’

His widow said in a statement: ‘How could Keith have been left alone, unarmed, guarding an open gate at one of the most iconic buildings in the world and one of the country’s top terrorist targets?

‘He was left at a vulnerable location with no protection, to die.

‘The fact there were no firearms officers there for nearly an hour is hard to believe.

‘I truly believe that if they had been there he would still be here today and Amy wouldn’t have lost her daddy.’

Speaking after the inquest, Assistant Commissioner Neil Basu apologised on behalf of the Met and said the lost chance to save a ‘brave and courageous officer’ was unacceptable.

On Monday the Metropolitan Police Service confirmed that it was facing a lawsuit over the death of PC Keith Palmer.

The Met, who is said to have refused to accept responsibility, confirmed to The Mirror it had received a ‘letter of claim’, which is used by lawyers to outline the legal basis for the action.

Since PC Palmer’s death, Scotland Yard has been accused of unfairly blaming the junior officers to hide systematic security failings.

The marksmen insist they were simply following orders by focusing their attentions on another entrance at Parliament that was commonly used by MPs and ministers.