Grocery sales rose 7.4 per cent in the 12 weeks to March 21 in a marked slowdown compared with previous months, according to data from Kantar.

While still showing impressive signs of growth, the online market’s share dropped back to 14.5 per cent from the record of 15.4 per cent in February 2021.

It is believed this is down to growing confidence among older shoppers, with 143,000 fewer over-65s making digital orders in March. 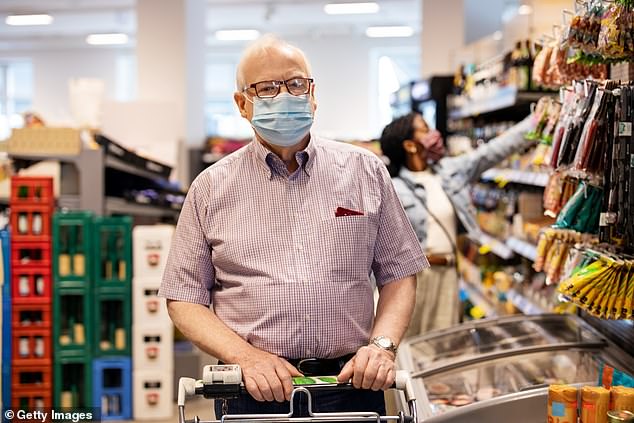 Now largely vaccinated, this age group increased its trips to bricks-and-mortar outlets by 6.8 per cent – more than double the national rate.

Overall, households made 13 million additional trips to the supermarket in the last month.

Sales were down 3 per cent in the four weeks to March 21 compared with a year earlier – the first comparison with the first national lockdown that saw supermarket shelves stripped bare at the start of the pandemic in the UK.

Fraser McKevitt of Kantar said: ‘This time last year, Brits were adjusting to schools and offices closing and making extra trips to the supermarket to fill their cupboards for lockdown.

‘To put that into context, shoppers made 117 million fewer trips to the supermarket this month compared with those fraught weeks in March 2020.’ 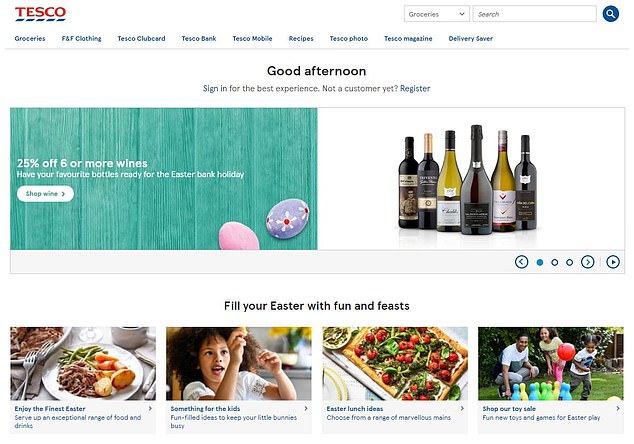 It is believed this is down to growing confidence among older shoppers, with 143,000 fewer over-65s making digital orders in March. Pictured: Tesco increased its sales by 8.5 per cent and once again gained share to capture 27.1 per cent of the market

Iceland saw the strongest growth during the period – excluding online-only business Ocado – with a jump in sales of 14.3 per cent, despite still refusing to repay the business rates holiday discount its rivals have handed back.

Aldi, which did repay its business rates, was the worst performer with growth of just 1.5 per cent in the 12-week period.

Mr McKevitt added: ‘It’s important to look at these numbers within the bigger picture, and two-year growth figures allow us to examine retailer performance amid these moving parts.

‘As restrictions on dining out continue, the average household spent an extra £134 on take-home groceries compared with this period two years ago.’

Online grocery sales also slowed in the past four weeks, with signs that shoppers are returning to physical stores, with market share dropping from 15.4 per cent in February to 14.5 per cent in March – equating to 13 million additional trips to supermarkets this month. 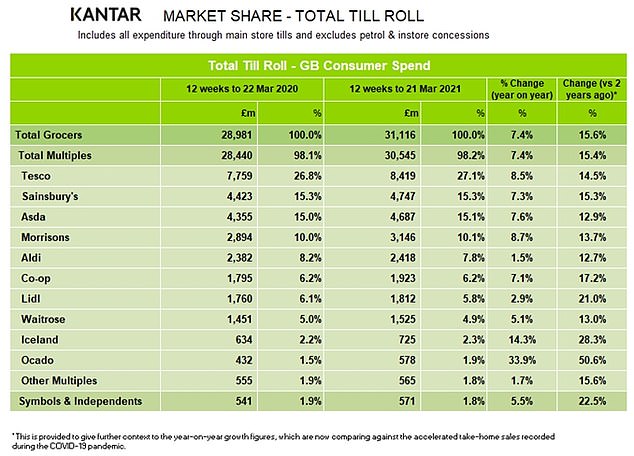 Iceland saw the strongest growth during the period – excluding online-only business Ocado – with a jump in sales of 14.3 per cent, according to data in Kantar

Tesco increased its sales by 8.5 per cent and once again gained share to capture 27.1 per cent of the market, up by 0.3 percentage points compared with the same 12 weeks last year.

Asda grew ahead of the market and edged up its market share from 15.0 to 15.1 per cent.

Morrisons’ sales growth of 8.7 per cent meant a share increase of 0.1 percentage points to 10.1 per cent, while sales at Sainsbury’s rose by 7.3 per cent to hold share steady at 15.3 per cent.

Ocado continued its impressive sales surge – up 33.9 per cent, although Lidl and Aldi, which do not offer online deliveries, only managed growth of 2.9 and 1.5 per cent respectively.

Co-op sales rose by 7.1 per cent, with its shoppers visiting an average of 22 times during the 12 weeks and Waitrose sales were up 5.1 per cent.

With the Easter weekend approaching, Kantar also found shoppers had already spent £37 million on hot cross buns and £153 million on Easter eggs by March 21 – £48 million more than at the same stage last year.