One in three UK restaurants say they won't survive until Christmas

The wildest stories of celebrity generosity

Plan to extend 50-MP limit in the Commons chamber ‘would cost £280,000 for just eight extra seats’ due to problems fitting microphones

A plan to expand the 50-MP limit in the House of Commons has been cast into doubt amid fears it will cost nearly £300,000 to add just eight seats.

Parliamentary officials have been desperately hunting for ways to extend the capacity in the chamber, after it was slashed by social distancing rules.

Politicians complain that debates have become sterile and ministers are not being properly tested due to limited scope for spontaneous interventions and questions.

Public Health England has dictated that MPs must sit two metres apart, meaning that whereas hundreds could previous pack in, there is now only room for a maximum of 50. 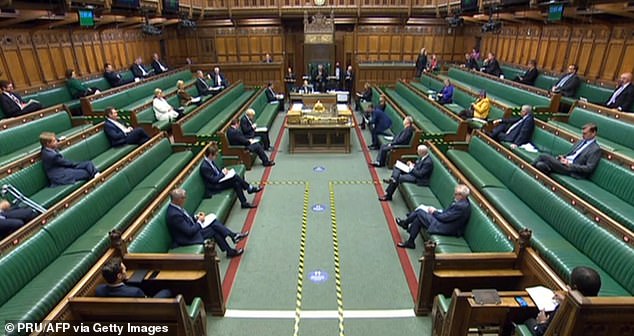 Politicians complain that Commons debates have become sterile and ministers are not being properly tested due to the 50-MP limit in the chamber (pictured, PMQs this week) 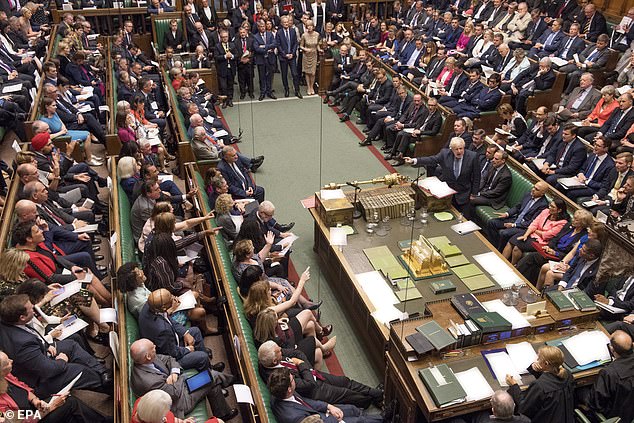 The scenes in the Commons during the pandemic have been a far cry from normal (pictured, Boris Johnson takes PMQs in September last year)

MPs are only allowed in the House if they are listed for a question or to take part in a particular debate.

The dangers of bending the rules were starkly illustrated last week when it emerged SNP Margaret Ferrier had spoken in the Commons shortly before receiving the results of a positive test.

Commons Leader Jacob Rees-Mogg and Speaker Lindsay Hoyle have been exploring the options for how to get more people into debates.

But PHE has advised that the only way of increasing numbers would be for MPs to wear masks in the chamber and give speeches sitting down.

Another possibility being looked at recently was to use some of the seats in galleries around the famous green benches for politicians.

However, the plan ran into a snag when officials advised that only eight places could be added to the total, and each one was likely to cost around £35,000 due to asbestos issues when drilling into the ceiling to fit new microphones, which hang down above MPs’ heads.

One Parliamentary source told MailOnline: ‘We could get eight more spots for MPs in the Commons by using the gallery, but it would be £35,000 for each one because of the asbestos.

‘That is way too much. And we can’t take risks about the chamber, especially after the Ferrier disaster.’

Another source confirmed that the option seemed to be closed off due to ‘extraordinary’ costs. 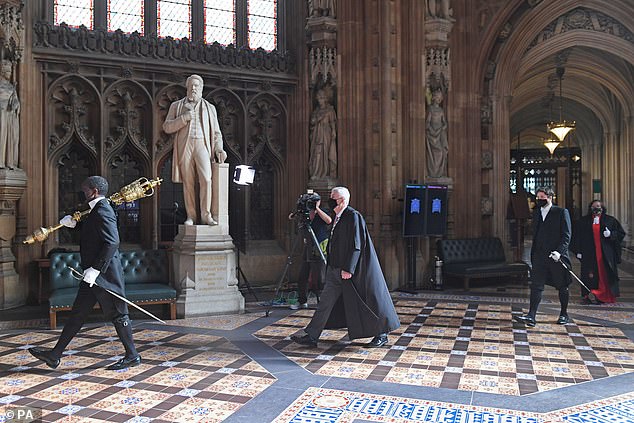 Earlier this week Sir Lindsay urged MPs and staff to wear face coverings while walking around Parliament and voting.

The Speaker wore a mask as he led the traditional procession at the start of Commons business.

On the advice of Public Health England, the House of Commons Commission has asked all parliamentary passholders to wear face coverings when they are moving between buildings or queuing for food and drink in cafes.

‘Just as we have all had to wear them in supermarkets and on public transport, it makes sense that we all wear face coverings to protect each other on the estate,’ Sir Lindsay said.

Staff and MPs are not expected to wear face coverings in meetings or when working in their offices.

MPs are not expected to wear face coverings in the Chamber but they have been advised to wear them in the lobbies during a division.