Police have released photos of two men they are hoping to identify after officers were injured in a scuffle with anti-lockdown protesters at Melbourne's Shrine of Remembrance in October last year.

Several police horses were hit in the face with a flagpole during the event dubbed "Freedom Day" by organisers, and a police van was damaged by protesters pelting objects at it. 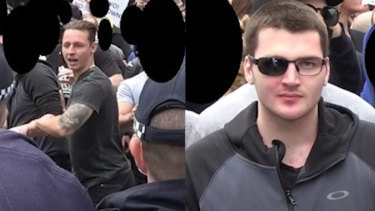 Two police officers sustained minor injuries in a scuffle while arresting two protesters around 2.30pm at the Shrine on St Kilda Road.

Detectives have released images and descriptions of two men they wish to speak to in relation to the incident at the Shrine of Remembrance, where the officers received minor injuries.

One man is described as a slim built caucasian man, 20 to 30 years old, with short brown hair and tattoos on his left arm. The man was wearing a black t-shirt and pants at the rally.

The second man is described as having a medium build, 20 to 25 years old, and short brown hair.

He was wearing a grey and black hoodie, black shorts and tights and was wearing sunglasses with one lens which were damaged during the affray.

Anyone who recognises either of the men or has information is urged to contact Crime Stoppers on 1800 333 000 or submit a confidential crime report at www.crimestoppersvic.com.au

Related posts:
TV and Movies
‘One Fine Day’: George Clooney and Michelle Pfeiffer Dish on Why the Rom-Com Bombed
Snowpiercer fans baffled by plot holes with Mr Wilford's train in season 2 premiere – did you spot them?
Dancing On Ice bosses 'won't axe Rufus Hound' as offensive tweets resurface
How Geordie Shore stars overcame drug binges, bankruptcy, assault charges and being kicked off a flight
'Bachelor In Paradise' Might Not Film in Mexico, But 'The Pond is Overstocked' for Summer 2021
Recent Posts
This website uses cookies to improve your user experience and to provide you with advertisements that are relevant to your interests. By continuing to browse the site you are agreeing to our use of cookies.Ok