This week marks one year since David Adler Staveley faked his suicide before going on the run from the law for almost two months after he and a co-conspirator were the first in the nation to be charged with fraud in the Paycheck Protection Program in May 2020.

Last week, Staveley pleaded guilty in a federal court in Rhode Island to conspiracy to commit bank fraud and failure to appear in court.

Also last week, federal prosecutors in California and Texas secured convictions in PPP fraud cases where defendants tried to bilk taxpayers out of millions in forgivable loans meant to save jobs and keep businesses afloat during the COVID-19 pandemic. The major convictions within a span of two days underscore how the Justice Department is cracking down on fraud cases from COVID-19 relief.

In May alone, federal prosecutors brought charges in two separate cases in New Jersey, one in Maine, a separate California case, one in Mississippi and one in Connecticut. In these cases, defendants are still presumed innocent.

Also in early May, an Oklahoma man pleaded guilty to false statements to a financial institution in attempting to get a $300,000 PPP loan.

The Justice Department has charged more than 120 defendants with fraud related to PPP loans. Some cases are substantial. For example, in March, a Texas man pleaded guilty to a scheme applying for 15 different PPP loans using 11 different companies to get $24.8 million. In a pending case in California, federal prosecutors charged eight defendants with seeking more than 100 loans totaling almost $22 million using stolen identities and fake companies.

Staveley, 54, of Andover, Mass., pleaded guilty to conspiring with David Andrew Butziger, 53, of Warwick, R.I., to file fraudulent PPP loan applications at a Rhode Island bank, according to the U.S. Attorney’s office for the District of Rhode Island. Butziger pleaded guilty last September to conspiracy to commit bank fraud and is scheduled to be sentenced in late June.

Staveley filed PPP loan applications for more than $500,000 purportedly to meet payroll for four separate businesses. However, two of those businesses were already closed and he didn’t own the other two, thus had no wages to pay, according to the Justice Department.

In an unusual twist, three weeks after being released to home detention, Staveley – who had a June 2 court date – managed to remove his electronic monitoring device. He then left a suicide note in his car, which was located by the ocean in Massachusetts, unlocked and with his wallet inside, according to the Justice Department.

After staging his suicide, Staveley traveled to various states and used false identities and stolen license plates from May 26 until the U.S. Marshals Service captured him on July 23 in Alpharetta, Ga., according to prosecutors.

The Small Business Administration’s Paycheck Protection Program was part of the first COVID-19 relief measure, known as the CARES Act, for Coronavirus Aid, Relief, and Economic Security. The program allowed qualifying businesses to receive forgivable or low-interest loans to meet payroll costs and was intended to reduce job losses during an economic emergency. In March 2020, Congress and then-President Trump made $349 billion in forgivable loans available to small businesses in the CARES Act. In April 2020, Congress authorized more than $300 billion for additional PPP funding and then another $284 billion in December 2020.

Fahad Shah, 44, of Murphy, Texas, got $1.5 million in PPP loans after claiming his company, WBF Weddings by Farah, employed 126 people with an average monthly payroll of $700,000. It was a bit of an exaggeration for a company with two employees, according to the U.S. Attorney’s office for the Eastern District of Texas.

Shah admitted to using more than $1 million from the federal loan to pay off his home mortgage, buy securities in his personal investment account and buy two Teslas, two Freightliner trucks and a Mercedes Benz van, according to the Justice Department. He pleaded guilty last Wednesday to filing fraudulent loan applications and for submitting a fraudulent employer’s information with the Internal Revenue Service. 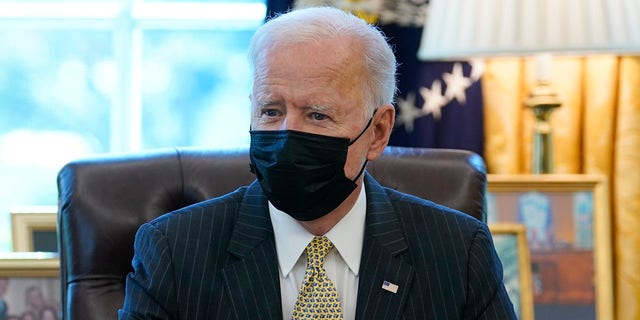 In this March 30, 2021, file photo, President  Biden speaks after signing the PPP Extension Act of 2021 in the Oval Office of the White House in Washington. The government’s key COVID-19 relief program for small businesses has run out of money. The Small Business Administration said Wednesday, May 5,  that the Paycheck Protection Program has been exhausted. As of Sunday, the PPP had given out nearly 10.8 million loans worth more than $780 billion since April of last year.  (AP Photo/Evan Vucci, File)
(AP)

“PPP loans were intended to help businesses keep themselves and their employees afloat during the COVID-19 pandemic,” acting U.S. Attorney Nicholas J. Ganjei said in a statement after Shah’s guilty plea.

“PPP loans were not, and never were, intended to serve as personal loans for personal use. By applying and qualifying for PPP funds on fraudulent grounds, Fahad Shah took advantage of the COVID-19 economic crisis to enrich himself and his family,” Ganjei continued. “By seeking a loan that he should not have received, Shah helped to deplete the amount of funds available to all potential legitimate borrowers who really needed financial support.”

The same day Shah pleaded guilty in Texas, two California brothers – Caesar Oskan, 66, of San Rafael, and Ester Ozkar, 66, of Novato, pleaded guilty in federal court in San Francisco to making false statements to a financial institution in separate schemes, according to the Justice Department.

The two brothers admitted that between March 2020 and June 2020 they each submitted multiple separate fraudulent applications for Economic Injury Disaster Loans, or EIDL, and PPP loans to defraud the Small Business Administration and the banks handling the PPP loans.

“Pandemic relief funds are limited and intended to save legitimate struggling businesses from failing,” Acting U.S. Attorney Stephanie M. Hinds for the Northern District of California said in a statement. “Individuals, like these two brothers, who treat these pools of relief funds as their personal bank accounts deserve to be vigorously prosecuted.”