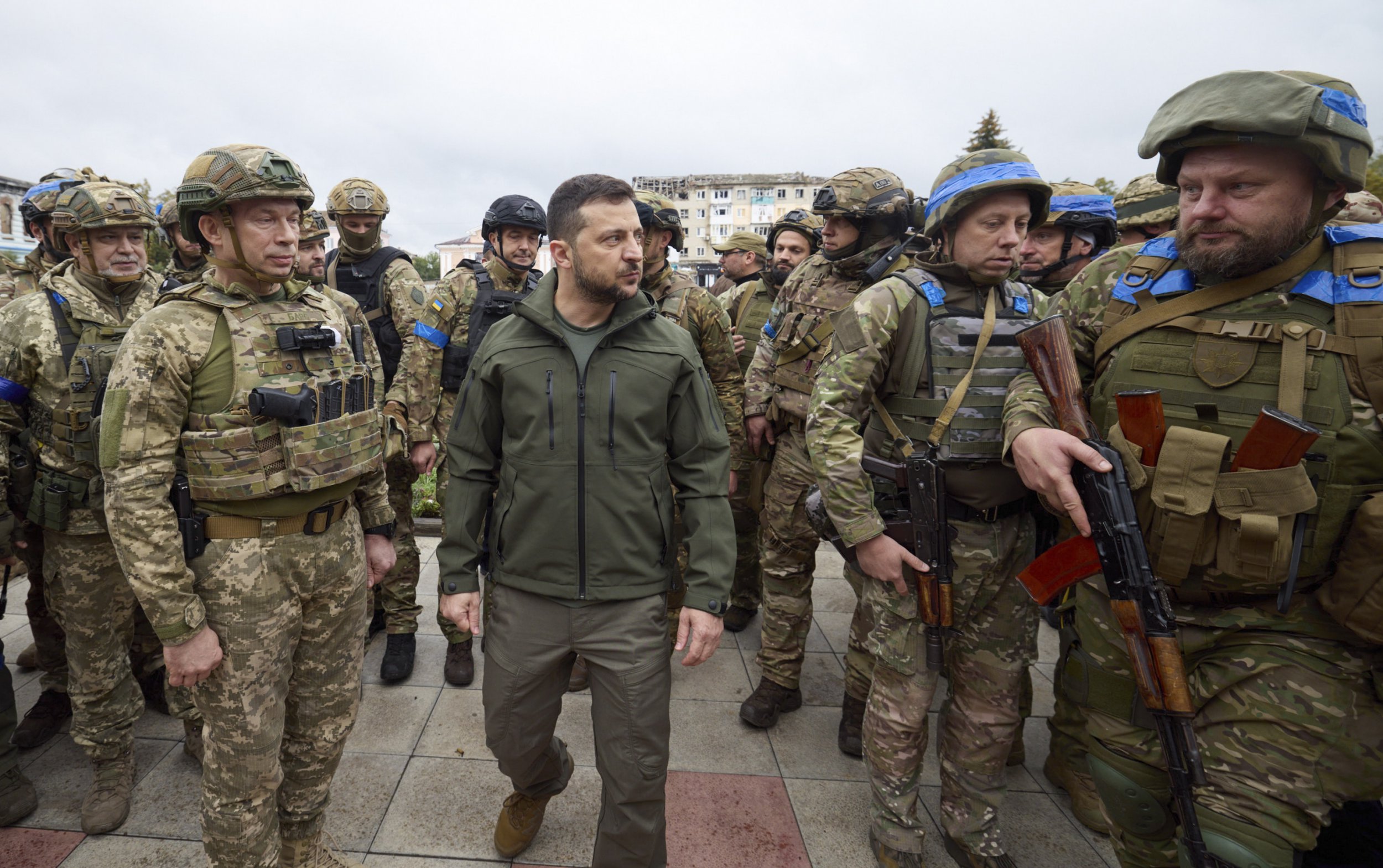 Volodymyr Zelensky sang the Ukrainian national anthem while watching the country’s flag be hoisted above the burned-out town hall of a city seized back from the Russians.

The war-scarred city of Izium was taken as part of Kyiv’s stunning counter-offensive which has reclaimed large swaths of territory in the northeastern Kharkiv region.

President Zelensky’s surprise visit to the area, which had been under Russian control until just four days ago, underlined the scale of the Kremlin’s rapid and chaotic retreat.

He promised to lead Ukraine to victory in the conflict, saying: ‘Our blue-yellow flag is already flying in de-occupied Izium. And it will be so in every Ukrainian city and village.’

After almost six months under Russian occupation, Izium has been left largely devastated, with apartment buildings blackened by fire and pockmarked by artillery strikes.

A gaping hole and piles of rubble stood where one building had collapsed.

‘The view is very shocking, but it is not shocking for me,’ Zelensky told journalists, ‘because we began to see the same pictures from Bucha, from the first de-occupied territories… the same destroyed buildings, killed people.’

Bucha is a small city on Kyiv’s outskirts from which Russian forces withdrew in March. In the aftermath, Ukrainian authorities discovered the bodies of hundreds of civilians dumped in streets, yards and mass graves. Many bore signs of torture.

Earlier on Wednesday, an emotional-looking Zelensky handed out medals to soldiers who freed the Balakliia area, another town retaken in recent days.

The Ukrainian president says his army has liberated around 3,100 square miles of territory so far this month, a swath of land nearly equivalent to the island of Cyprus.

Russia announced its withdrawal from key towns but it was not possible to confirm those figures.

Ukraine’s sudden advances over the past week have cheered its supporters in the West, although leaders say it is too soon to know whether Kyiv can keep up the pace.

‘It’s clear the Ukrainians have made significant progress. But I think it’s going to be a long haul,’ US President Joe Biden said.

A day after speaking by phone for 90 minutes to Vladimir Putin, German Chancellor Olaf Scholz said the Russian president ‘unfortunately’ still does not think his invasion was a mistake.

Russian forces still control about a fifth of Ukraine in the south and east, but Kyiv is now on the offensive in both areas.

The White House, which has provided billions of dollars of weapons and support to Ukraine, has said the United States is likely to announce a new military aid package in the ‘coming days’.

On the road into Izium, bus stops were daubed with ‘Z’ markings, the symbol Russian forces use to identify themselves, and the charred remains of tanks and armoured personnel carriers lay by the roadside.

With a pink hood wrapped around her face for warmth, Liubov Sinna, 74, said residents were still fearful.

‘We waited a long time for our guys. Of course we feel positive. Joy. But there is also fear – fear that the Russians could return here,’ she said.

‘Because we lived through this whole six months. We sat it out in cellars. We went through everything it is possible to go through. We absolutely cannot say that we feel safe.’

There was no gas, electricity, or water supply in the town, she added, saying she was unsure how people would get through winter.

Ukraine has accused Russia of attacking civil infrastructure in recent days in retaliation for its battlefield losses.