Senior minister Dominic Raab raised concerns about a decision to send a Royal Navy warship through contested Crimean waters before a confrontation with Russian forces, it was revealed today.

The Foreign Secretary is said to have been in a ‘dispute’ with Defence Secretary Ben Wallace over the route taken through the Black Sea by HMS Defender earlier this week.

The Type-45 destroyer was involved in an international incident after using an international shipping lane that went close to the Ukrainian peninsula, which is illegally occupied and claimed by Russia.

On Wednesday, a Russian patrol vessel fired repetitive thudding bursts from its 30mm cannon near the British destroyer after it ignored their orders to steer away from Crimean waters.

Ministers have insisted that the route was pre-planned and followed an internationally recognised route between Ukraine and Georgia.

But a source told the Telegraph today that Mr Raab and Mr Wallace clashed at a meeting, before demanding Boris Johnson make the final decision.

‘The whole dispute was between Raab and Wallace, then it went to the PM. The decision was sent to Defender on Monday that she was to take innocent passage through those waters,’ they said.

Mr Raab is said to have warned that Moscow could seek to exploit the journey for propaganda purposes.

However sources told MailOnline that it was ‘rubbish’ to suggest there was a disagreement between him and Mr Wallace and that the passage route was ‘long-planned’. 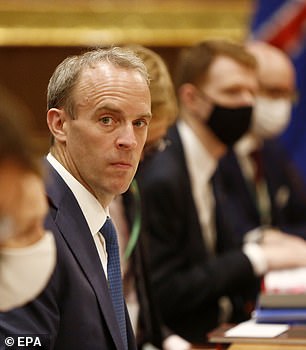 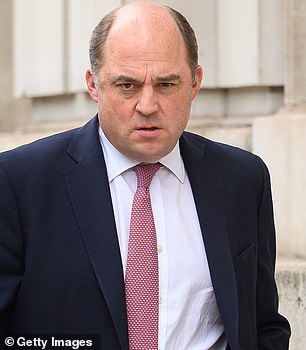 The Foreign Secretary is said to have been in a ‘dispute’ with Defence Secretary Ben Wallace over the route taken through the Black Sea by HMS Defender earlier this week. 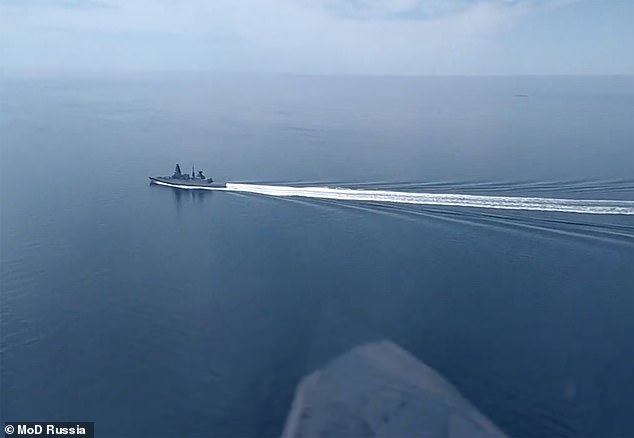 The Type-45 destroyer was involved in an international incident after using an international shipping lane that went close to the Ukrainian peninsula, which is illegally occupied and claimed by Russia. 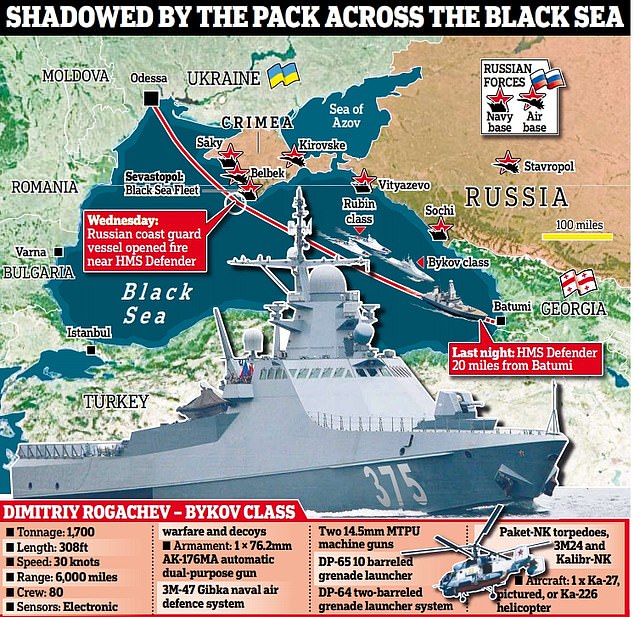 In the video released by Putin’s regime, three shots each with two shells are seen fired as warning shots, by which time HMS Defender is visible but at a long distance away

The captain of HMS Defender has warned the Kremlin he will do whatever is required to protect the 240 crew serving on his ship.

Speaking exclusively to the Mail, Commander Vincent Owen (below) strongly criticised Russian forces for threatening him and the men and women under his command.

On Wednesday, a Russian patrol vessel fired repetitive thudding bursts from its 30mm cannon near the British destroyer moments after Cdr Owen ignored their orders to steer away from Crimean waters. 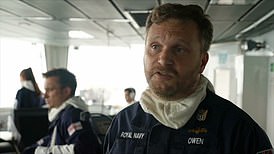 The dramatic incident witnessed first-hand by the Mail plunged UK-Russia relations to their lowest point since the Salisbury poisonings in 2018.

Cdr Owen, 42, accelerated to overtake the Russian border vessels and continued his course through Crimean territorial waters. It was then the bursts of cannon fire were heard on her port side. It followed a series of radio messages that a gunnery exercise was occurring in the area.

Cdr Owen said: ‘I have always got the inherent right of self-defence, to defend the men and women aboard the ship.

‘It is part of my orders delegated to me by the commanding officer of the Carrier Strike Group (CSG).

‘They then fired from one of their coastguard ships. On this occasion, I was comfortable I was acting within that delegated authority. I knew the range of their weapon systems aboard the border patrol vessels and maintained the necessary speed to remain at a safe distance.

Russia summoned the UK’s ambassador in Moscow for a formal telling off last night as relations between the two nations continued to deteriorate after the air and sea skirmish in the Black Sea.

Russia’s foreign ministry hauled in Deborah Bronnert in order to deliver a ‘tough demarche’ – diplomatic jargon for a firm rebuke.

It came as Boris Johnson borrowed a page out of Vladimir Putin’s playbook as he joined the British Army for land and air manoeuvres before declaring the Royal Navy will not be dictated to by Moscow following yesterday’s incident.

As Russian officials promised to bomb any ship unlawfully in Crimean waters, the PM said it was ‘entirely right’ for HMS Defender to have been travelling close to the peninsula because the UK does not recognise Russia’s ‘illegal’ claim to the territory.

Mr Johnson dodged the question of whether he had personally authorised the Royal Navy destroyer to use the route but insisted that British ships would make the same journey again if needed, despite Russian threats.

Mr Putin’s deputy foreign minister Sergey Ryabkov warned against ‘provocative steps’ and vowed that Russia will bomb any ships who ‘violate the state borders of the Russian Federation’.

Moscow claimed it fired warning shots at the destroyer as it passed through the contested part of the Black Sea but that assertion was dismissed by the UK which said Russia was conducting a routine ‘gunnery exercise’.

Russia subsequently accused the UK of telling ‘barefaced lies’ about what had happened but Mr Johnson struck a defiant tone as he hit back and said: ‘Well, they’re the bear.’

Earlier, the Environment Secretary George Eustice had hinted that he believed Russia’s claim of British aggression was a stunt, with Moscow trying to paint a regular military exercise as something more significant.

Meanwhile, Defence Secretary Ben Wallace rubbished the claim of shots being directed at the ship, telling MPs: ‘At no point were warning shots fired at HMS Defender, nor bombs dropped in her path as has been asserted by the Russian authorities.’

Mr Johnson said: ‘I think it was wholly appropriate to use international waters. This is part of sovereign Ukrainian territory, it was entirely right that we should vindicate the law and pursue freedom of navigation in the way that we did, take the shortest route between two points, and that’s what we did.’

He added: ‘We don’t recognise the Russian annexation of Crimea, it was illegal, these are Ukrainian waters and it was entirely right to use them to go from A to B.’

The PM spoke out on visit to New Normandy Barracks in Aldershot, where he addressed soldiers, drove an armoured vehicle complete with machine gun before jumping into a helicopter in aviation gear for the flight back to London.

‘The route taken was the most direct, via an internationally recognised route between Ukraine and Georgia.’