Roundabout’s £2.3million cost drives locals round the bend after its original budget trebled

Britain’s  first roundabout that gives cyclists and pedestrians priority over vehicles has come under fire after its costs trebled to £2.3million.

Cambridgeshire County Council has been accused of ‘recklessly pushing ahead’ with the project, which originally had an £800,000 budget.

The council blamed the costs on ‘unexpected utility work’ and the pandemic. 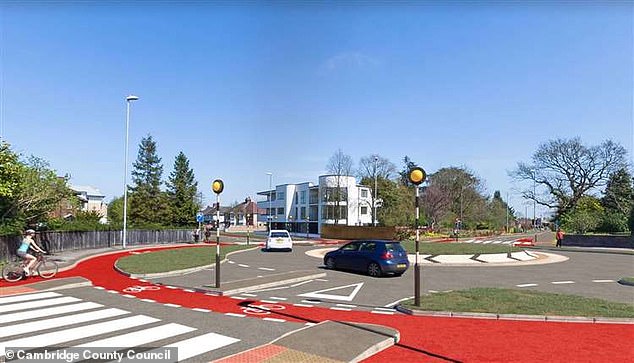 Cambridgeshire County Council has been accused of ‘recklessly pushing ahead’ with the project (CGI image pictured), which originally had an £800,000 budget

But campaigners criticised planners for starting the project without initially checking for problems.

Edward Leigh, of Smarter Cambridge Transport, said the council had ‘recklessly pushed ahead with a scheme before completing detailed survey work’.

He added it may have been better to spend money on other cycling schemes.

And one local said: ‘This was never an accident blackspot. Just vain politics to brag about being a first in UK.’

The roundabout is based on a Dutch design.

Motorists using an inner ring have to let cyclists pass on a red outer ring. There are also zebra crossings for pedestrians at all four exits.

It was due to be finished in April but it is now expected to be completed next month.

Motorists’ reaction to news of the roundabout

Paul Howell: ‘Can’t wait for everyone (yes everyone) to get confused and the accidents to start happening.

‘How about spending the money on road schemes that need it.’

Tony Stark: ‘Putting pedestrian crossings on these in Cambridge is loading the bullet into a gun. I hope when the accidents start building up, the city council will be willing to pay out as ultimately it will be their fault.

‘The road networks in Cambridge are out dated and can not deal with the current and ever increasing flow. Better road networks should be a priority not further slowing it down and prioritising pedestrian and cycle ways.’

Helen Lake: ‘We have similar roundabouts in France and I do not think they are a good idea because of the pedestrian crossings being placed so close to the roundabout.

‘Cars wishing to exit the roundabout will be blocked by people crossing – in France the majority of the time they don’t bother to stop at zebra crossing anyway…. but when they do, cars fill up the circulation space on the roundabout!!! Not a good idea at all!!!’