‘Do you want to leave the chamber’: Moment Sir Lindsay Hoyle TELLS OFF Matt Hancock and threatens to chuck him out of the Commons for speaking over Sir Keir Starmer at PMQs

Sir Lindsay Hoyle today threatened to kick Matt Hancock out of the House of Commons after the Health Secretary interrupted Sir Keir Starmer at PMQs.

Mr Hancock was sat next to Boris Johnson on the Government frontbench as the premier was grilled by the Labour leader.

But he was repeatedly talked over by a seated Mr Hancock, resulting in a furious telling off from Sir Lindsay.

The Commons Speaker initially said he did not ‘mind you advising the Prime Minister’ but told him to be quiet when Sir Keir was speaking.

Mr Hancock then protested prompting Sir Lindsay to hit back and ask the Health Secretary: ‘Sorry – do you want to leave the chamber?’ 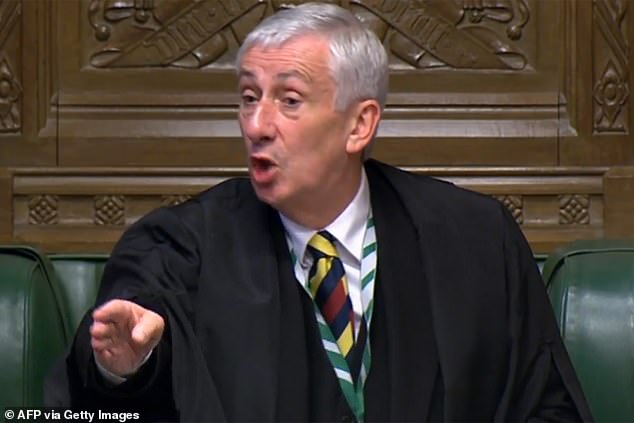 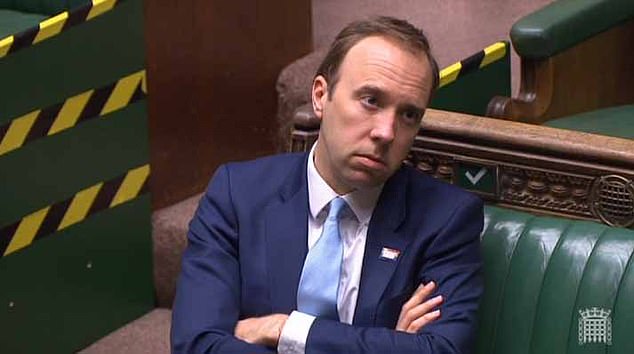 Mr Hancock could be heard talking over Sir Keir as the Labour leader tried to ask Boris Johnson questions. Sir Lindsay told the Health Secretary: ‘Sorry – do you want to leave the chamber?’

Sir Keir used PMQs to challenge Mr Johnson on the Government’s approach to tackling the spread of coronavirus in care homes.

The Labour leader cited evidence given by care bosses which suggested that while ministers had pledged to ramp up testing staff and residents they were yet to actually deliver on it.

Sir Keir said the Government’s own documents state every care home for over-65s will have been offered testing for residents and staff by June 6.

Mr Hancock could be heard challenging Sir Keir on what he said, as the Labour leader addressed him directly: ‘The Health Secretary says “he is wrong” – I am quoting the Government’s paper.’

Sir Keir then asked the PM what was causing the ‘continued delay in routine testing in our care homes’.

Mr Johnson accused Sir Keir of being ‘simply in ignorance of the facts because the reality is already 125,000 care home staff have been tested’.

The Prime Minister then praised Mr Hancock and said thanks to the hard work of the Health Secretary the Government will soon be able to conduct 200,000 tests a day.

Mr Johnson said ‘actually now this country is testing more than virtually any other country in Europe’.

When Sir Keir replied, he accused the Prime Minister of failing to answer his question as Mr Hancock continued to talk over the Labour leader. 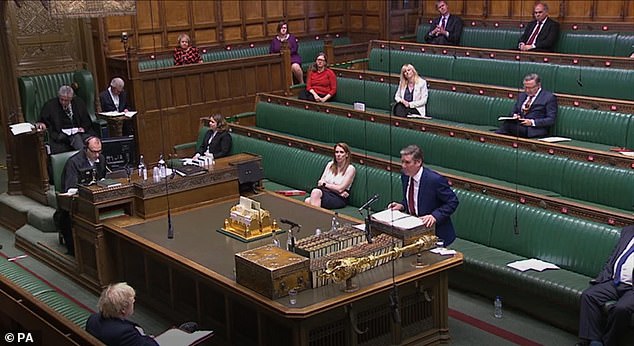 ‘I don’t mind you advising the Prime Minister but you don’t need to advise the Opposition during this.’

Mr Hancock appeared to try to plead his case to the Commons Speaker, prompting Sir Lindsay to threaten to kick him out of the chamber.

Sir Lindsay said: ‘Sorry – do you want to leave the chamber? We are on maximum numbers, if you want to give way to somebody else I am more than happy.’

The current ‘hybrid’ arrangements in the House of Commons mean a maximum of 50 MPs are allowed to be physically present in the chamber so that social distancing rules can be adhered to.