Spain has seen nearly 17,000 ‘unexplained’ extra deaths since the start of 2020 and suffered a 155% spike in mortality at Covid-19 peak in early April, new data reveals

New official data in Spain released on Wednesday showed that many more people have died this year than the recorded number of coronavirus fatalities suggests, raising questions over almost 17,000 unexplained deaths.

The data also revealed a shocking 155% spike in mortality at the epidemic’s peak in early April when compared with the same period a year earlier.

This means that there have been 16,818 more unexplained deaths than there was during the same period last year that have not been put down to Covid-19.

Experts believe these include cases where the cause is hard to establish due to underlying conditions, and fatalities among people who avoided hospital treatment for other problems due to the fear of contracting the virus. 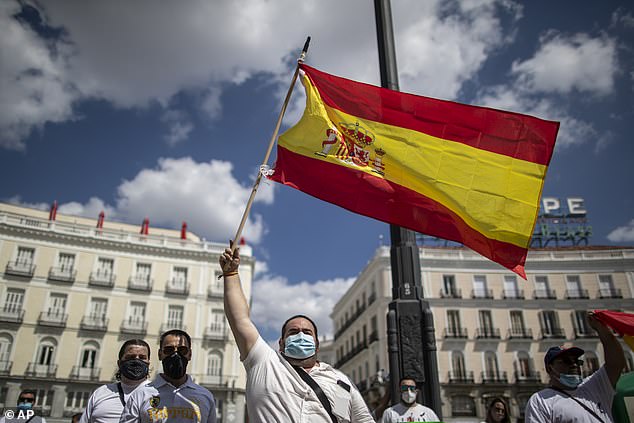 Overall mortality in Spain jumped its highest, 155%, in the worst week of the coronavirus outbreak in early April from the same period a year earlier, according to data from the the National Statistics Institute (INE).

The INE said it was starting an experimental series monitoring the weekly mortality rate to help shed light on the impact of the pandemic.

The data from the INE was consistent with figures from the National Epidemiology Centre, which estimates mortality comparing deaths recorded across civil registries with historical averages.

Supporting the Spanish government’s belief the worst is over, on the last week analysed by the INE, between May 18-24, mortality was at the same level as a year earlier.

Elderly people over 90 were the hardest hit so far this year, with 27% more deaths over the 21-week period, while 25% more died among those aged 85-89. There was hardly any difference from a year earlier in groups under 54 years old.

The institute’s data is higher than the official Health Ministry death toll of the pandemic, which on Wednesday stood at 27,127.

That counts only those who died having tested positive for COVID-19. Officials say the disparities are due to people who died without being tested or from other causes. The figure for excess deaths is seen as a more accurate reflection of the toll wreaked by the pandemic. 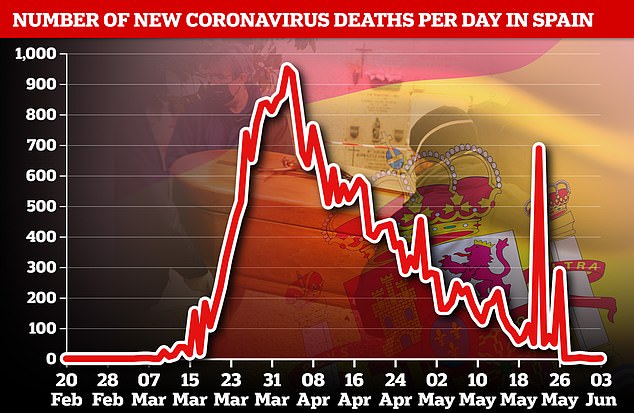 Spain claimed to have suffered zero coronavirus deaths for the second day running Tuesday, with just one being added to the total on Wednesday, amid doubt over the numbers after they changed the way they are tallied 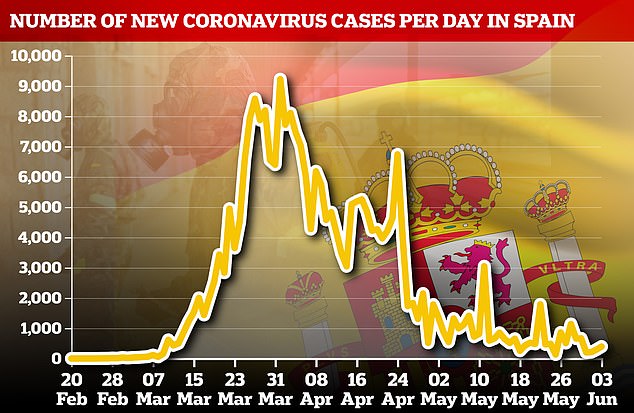 The country also claimed today to have seen just 219 new coronavirus cases in the last 24 hours, though the overall total moved upwards by 394 because of how it now reports the numbers

Today, Spain’s official total number of Covid-19 deaths increased by one – its first recorded death in three days, but due to the way it now tallies the figure the country’s data has been accused of being unreliable.

On Wednesday, its ‘deaths in the last seven days’ figure stood at 63 when on Tuesday it stood at 34, an increase of 29, suggesting it had added more deaths to previous days that had not been registered before.

Spain’s new experimental method of reporting means that it is impossible to know when the deaths occurred from the daily bulletin released by the government, or whether the figure has moved up or down day-to-day.

Experts have also said that the country’s R rating – which is used to check whether a second peak of infection is coming – is impossible to calculate as the nation prepares itself to reopen to tourists from some countries.

The country’s old daily totals included all cases entered into government databases in the last 24 hours, regardless of when the actual infection or death occurred.

This is how most world countries have been reporting their data.

But Spain now only counts cases and deaths in its daily figures where the person fell sick or died within 36 hours of the report being published. 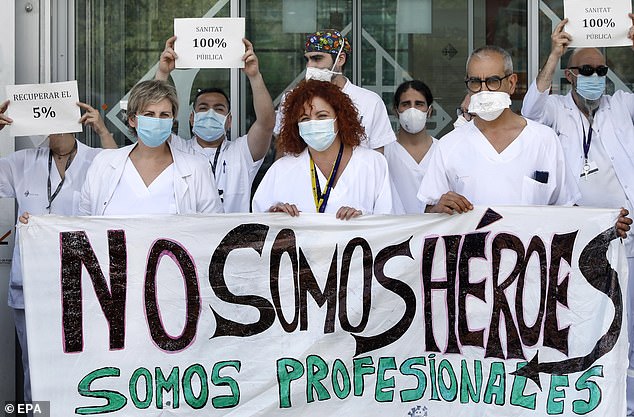 Experts believe the unexplained deaths include cases where the cause is hard to establish due to underlying conditions, and fatalities among people who avoided hospital treatment. Pictured: Healthcare workers demonstrate in Barcelona for stable contract conditions, a 100 percent public healthcare and individual protection equipment for health workers in Catalonia, June 3, 2020 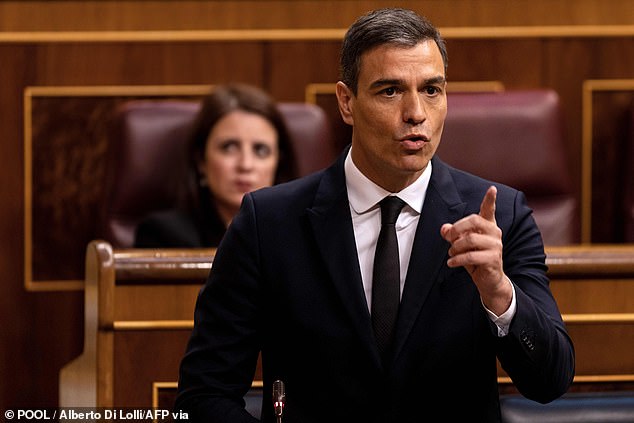 Pictured: Spain’s Prime Minister Pedro Sanchez takes part in the Government’s question time session prior to voting an extension of the state of emergency amid the coronavirus outbreak in Madrid on June 3, 2020

The new reporting method has caused discrepancies with Spain’s totals.

For example, the country claimed to have suffered just 208 cases in the 48 hours before Tuesday’s figures were released, but its infection total moved up by 503.

That is because the extra 295 cases have been back-dated to different days. Spain does not say as part of its daily briefing when these cases occurred.

Experts said on Tuesday that it is ‘unlikely’ that the country had really suffered no deaths for two days, and the ‘zero’ figure is likely the result of a data backlog.

It often takes more than 36 hours to register a cause of death.

According to the UK’s Office for National Statistics, the average time taken to register a death in England and Wales in 2018 – the most recent year for which data is available – was five days.