London: He’s the veteran American pollster whose advice led to the use of the term “climate change” instead of “global warming”, and “death tax” by political opponents of inheritance tax.

In a 2002 memo to the Bush administration in 2002, the Republican Party strategist wrote that climate change suggested “a more controllable and less emotional challenge”. Hence, it was “less frightening to voters” than global warming that had catastrophic connotations.

Now, Dr Frank Luntz is testing public opinion in Britain to find an alternative to “capitalism”, after 170 years of use, because he fears it is becoming a “bad word”. 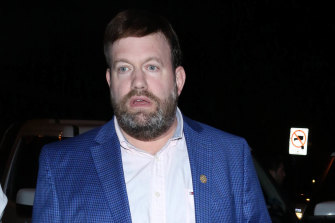 A case in point, Luntz, 59, says, was the partly successful campaign by activists demanding that companies withdraw their advertising from GB News, a new UK centre-right television station.

“It’s good that [GB News] exist,” Luntz says. “It’s a challenge. If we politicise everything in life the outcome will be a division that is irreplaceable. And we’re heading there now.”

Capitalism itself is already a “bad word” in the US and is fast becoming so in the UK too, he says.

“It’s one of the key things I’m trying to figure out… Does this country need an alternative to the word capitalism? I think it does. We’re about to find out.” 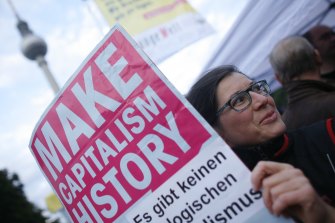 A protester holds a poster during a trade union demonstration against budget cuts, in Berlin.Credit:AP

Questions on capitalism, and voters’ approach to it, form part of a giant survey Luntz has put together as part of a project for the Centre for Policy Studies (CPS) think tank in London, where he has based himself for the northern summer.

His work conducting surveys and focus groups is fuelled by a homemade cocktail of instant coffee and Diet Coke, designed to counter the exhaustion he has felt since suffering from a stroke last year. The pollster’s eccentricities do not stop at his drink of choice – he is also known for having built a replica of the Oval Office at his home in Los Angeles, and for a collection of some 200 pairs of shoes, including the Union flag trainers he chose for today’s day of work at the CPS office in Westminster.

Luntz, who has advised several prominent Republicans and acted as a political consultant on The West Wing series, is examining the phenomena of “wokeism” and populism in the UK, including the extent to which they polarise debate – and how politicians can address both. During his time in Westminster, he has sounded out senior cabinet ministers and hopes also to brief the Labour Party on his findings.

“Wokeism came about because of a legitimate concern about inequality.

“Populism developed because of a legitimate concern of entire segments of the population being ignored, or forgotten. Both of them come out of a legitimate problem, but both of them have elements of extremism that are as bad as the problem they wish to address,” he says.

“I think that the combination of populism and wokeism will lead you to a winter of discontent as bad as what we saw in 1979.”

Luntz was horrified by the hounding of Nick Watt, a BBC journalist who was chased by a large group of protesters chanting “traitor” and “scum” as he walked down Whitehall last week. He recognised populist fixations of some extremist supporters of Donald Trump in the chants of the crowd.

“When a mob will chase a BBC reporter, if that’s not an indication that you guys have a problem…” he says, before trailing off. “And it’s going to get worse. Because no one is saying, ‘Enough’.”

Luntz would define wokeism “the same way I would define pornography. I can’t define it. But I know if I see it”. But wokeism and populism both lead to “the closing down of debate, and the rejection of history, and an attempt to overturn social norms that have developed for a reason”.

The British government has launched a so-called “war on woke”, which has led to running battles against campaigners who seek to tear down statues of historical figures with links to the slave trade and many other monuments relating to uncomfortable elements of the country’s history. Ministers have also spoken out against the banning of speakers at universities because of their controversial views, and the suspension of Ollie Robinson, the England cricketer, for historical sexist and racist tweets.

Luntz insists that wokeism is “not about statues”. “It’s about people’s fear of speaking up and speaking out and disagreeing. It is what has been the hallmark of British democracy for hundreds of years.”

He adds: “It changes your history, or it focuses on the bad rather than the good. I think Thomas Jefferson is one of the greatest human beings who has ever lived. Wokeism focuses on the fact that he owned slaves.”

Luntz is concerned that the attacks on GB News will mean that it is not given “a chance” to succeed.

Luntz believes he may have strayed upon the campaigning phrase that he has been seeking, to allow a British politician to tap into the problems of wokeism and populism and begin to offer solutions.

“I bet you that’s the line,” he says, comparing the phrase to Donald Trump’s 2016 pledge to Americans that “I am your voice”.