It’s a tale of two cities: while NSW and Victoria are recording similar numbers of new COVID-19 infections, Sydney enjoys freedoms the like of which Melburnians can only dream. 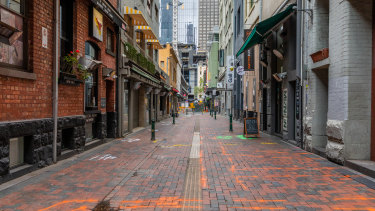 By the numbers: Why Victoria is still in lockdown and NSW has eased restrictions.Credit:Getty

The Victorian government is under increasing pressure from the Morrison government, businesses and the state opposition to move faster to wind back restrictions now that numbers are comparatively low.

But Premier Daniel Andrews claims the state risks jeopardising the gains it has made in suppressing the virus since its peak in August.

So why do disease experts think Melbourne remains under lockdown while Sydney is open for business?

While the two states' numbers might look similar on the surface, some epidemiologists who spoke to The Age said if you examined the figures closely, there was a difference.

For starters, 55 of NSW's cases in the past 14 days were acquired overseas.

Those infected are in hotel quarantine, which in NSW at least, has successfully stopped infected overseas travellers spreading the virus into the community.

By contrast, all Victoria's 108 infections in the past 14 days were locally acquired.

If you compare apples with apples, Victoria has recorded 108 local cases and NSW only 50.

Tony Blakely, a professor of epidemiology at the University of Melbourne, says another difference is the number of mystery cases, where the origins of the infection remain unknown.

NSW has recorded six mystery cases in the past 14 days, while Victoria has recorded 12. The infection source of six cases, however, was still being investigated in Victoria, some of which might turn out to be mystery cases.

The previous trigger for moving to the next step in Melbourne included there being less than five mystery cases in the state in the past 14 days, although Mr Andrews has now said significant changes will occur on November 2 and that date could be brought forward.

“Mystery cases speak to the trains of transmission we haven’t worked out,” says Professor Blakely, who prepared modelling for the Victorian government.

As of Monday, the average number of cases diagnosed in Victoria was 7.7, compared to 3.6 for locally acquired cases in NSW.

“We are not in an equivalent position,” Professor Sutton said.

“We do need that time to see that we have got an average that is actually what all of those epidemiologists are telling us is safe.”

Professor Mary-Louise McLaws, a UNSW epidemiologist and COVID-19 adviser to the World Health Organisation, says anything more than a 14-day rolling average of seven cases is considered in the red zone, while five to seven cases is in the orange zone.

She says Melbourne is still not in the green zone, which is an average of under five cases in the past 14 days.

Professor Catherine Bennett, the chair in epidemiology at Deakin University, says after 100 days of lockdown in Melbourne, COVID-19 should have died out in most households and small networks, with outbreaks confined to settings such as aged care homes.

She says in some ways Melbourne has had an advantage over Sydney in that the strict restrictions have meant there is more suppression of underlying spread of the virus.

Professor Bennett says, however, that she believes it is safe for retail and hospitality to reopen in Melbourne with step three restrictions.

Dr Heath Kelly, a former head of epidemiology at the Victorian Infectious Disease Reference Lab, says Victoria has had much more virus in the community than NSW.

“NSW has never been at the levels Victoria had at its peak. There is low level, widespread virus in the community, I think we can be absolutely confident about that. And we know the daily numbers won’t be catching every case.”

Dr Kelly says low COVID-19 case numbers, from a low base, as is the case with NSW, is not the same as low numbers from a high base.

If you put your blinkers on and took a snapshot of exactly where both states are now, says associate Professor Hassan Vally, an epidemiologist based at La Trobe University, you can fairly argue NSW is not too dissimilar to Victoria.

But he says the big difference is Victoria has had twice the amount of community transmission as NSW in the past 14 days.

“The confidence in Victoria's situation is low, because its numbers have moved so quickly. It is possible there is significant undetected transmission. Therefore, there is a bit more risk for Victoria. Having said that, right now in NSW… there are some signs they cannot be complacent. They are starting to see a creeping up in their number of cases."