THE centrepiece of Henry VIII’s lost crown has been found under a tree by an amateur treasure hunter.

Kevin Duckett ended a 400-year-old mystery when he dug up the solid gold figurine in a Northamptonshire field. 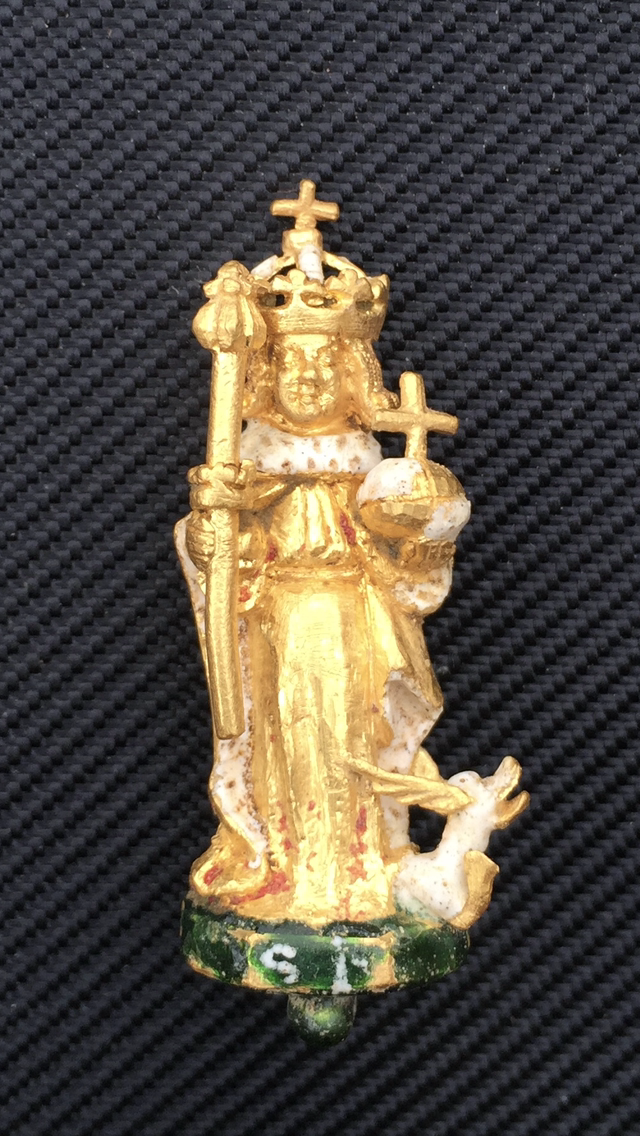 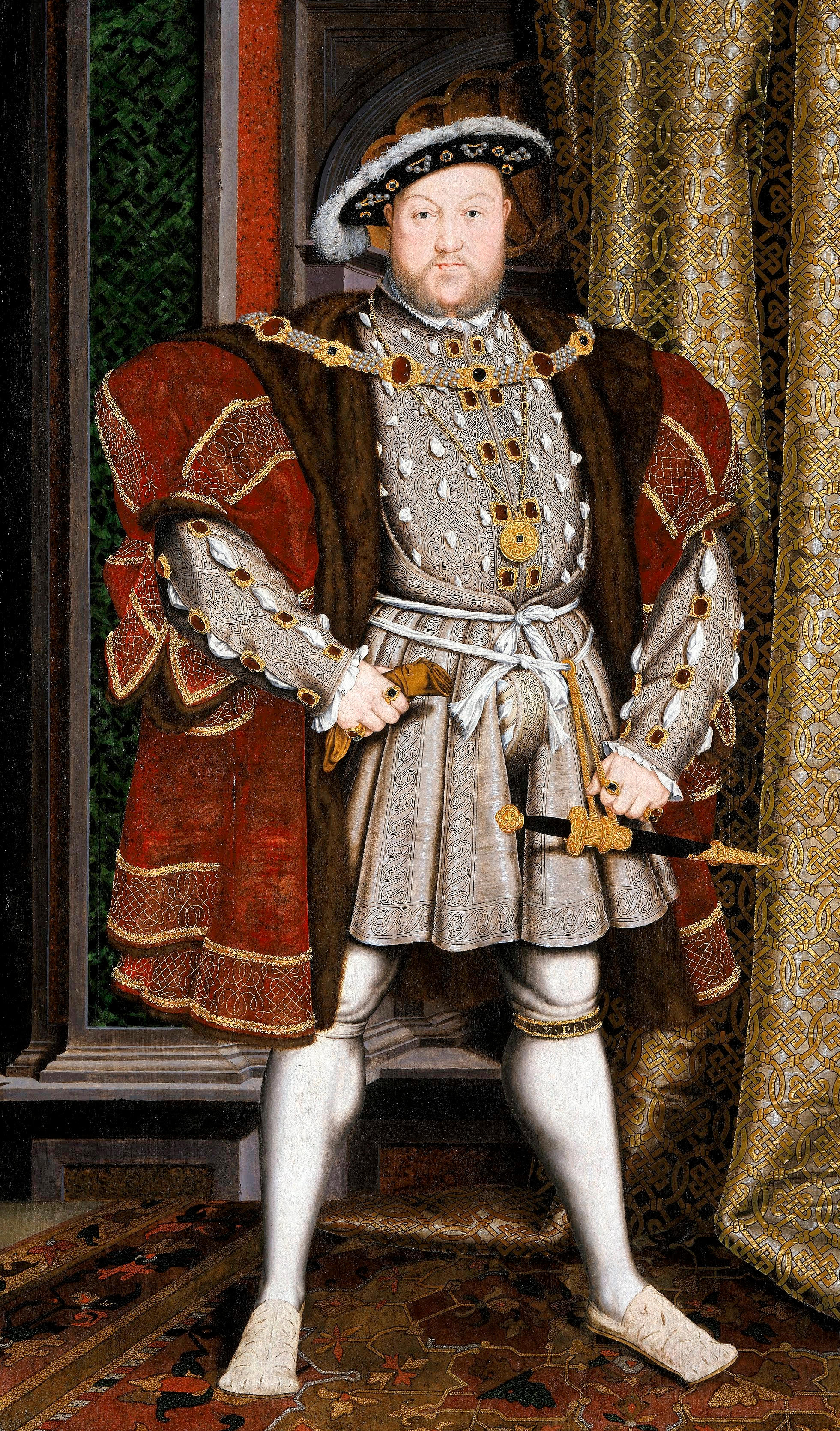 The 2½in-high, inch-wide piece, one of five on the Tudor crown, is now at the British Museum and could be worth £2million.

Experts say the find is one of the most significant by an amateur.

Thrilled Kevin, 49, unearthed it near Market Harborough and said: “At first I wondered if it was a crumpled foil dish from a 1970s Mr Kipling product, or even a gold milk bottle top.

“I’d been there about 20 minutes and found nothing.

“Then I got a very loud positive signal from my detector and started to dig down before spotting something.

“It was lodged in the side of a hole just a few inches down.

“I carefully removed it and knew by its colour and weight that it was solid gold.

“I brushed off the soil and sat down in amazement.

“The rush of adrenaline and the buzz of excitement started to flow through my body.

“I was holding what appeared to be a heavy solid gold and enamelled figurine.”

Historians feared the relic was lost for good when Oliver Cromwell abolished the monarchy in 1649 and beheaded Charles I.

Cromwell ordered the 7lb 6oz crown, valued by the then Parliament at £1,100, to be melted down, minted and sold as coins. 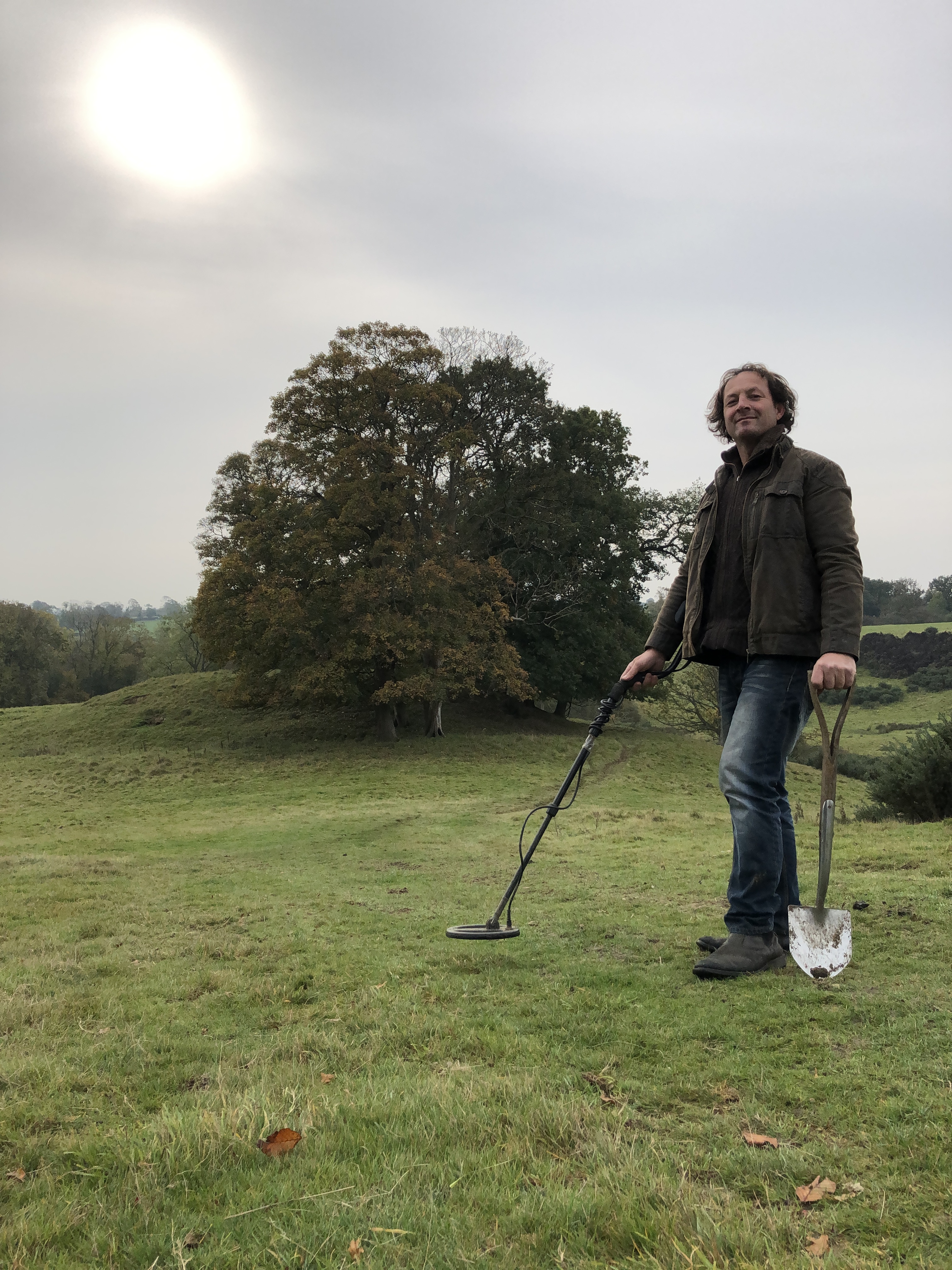 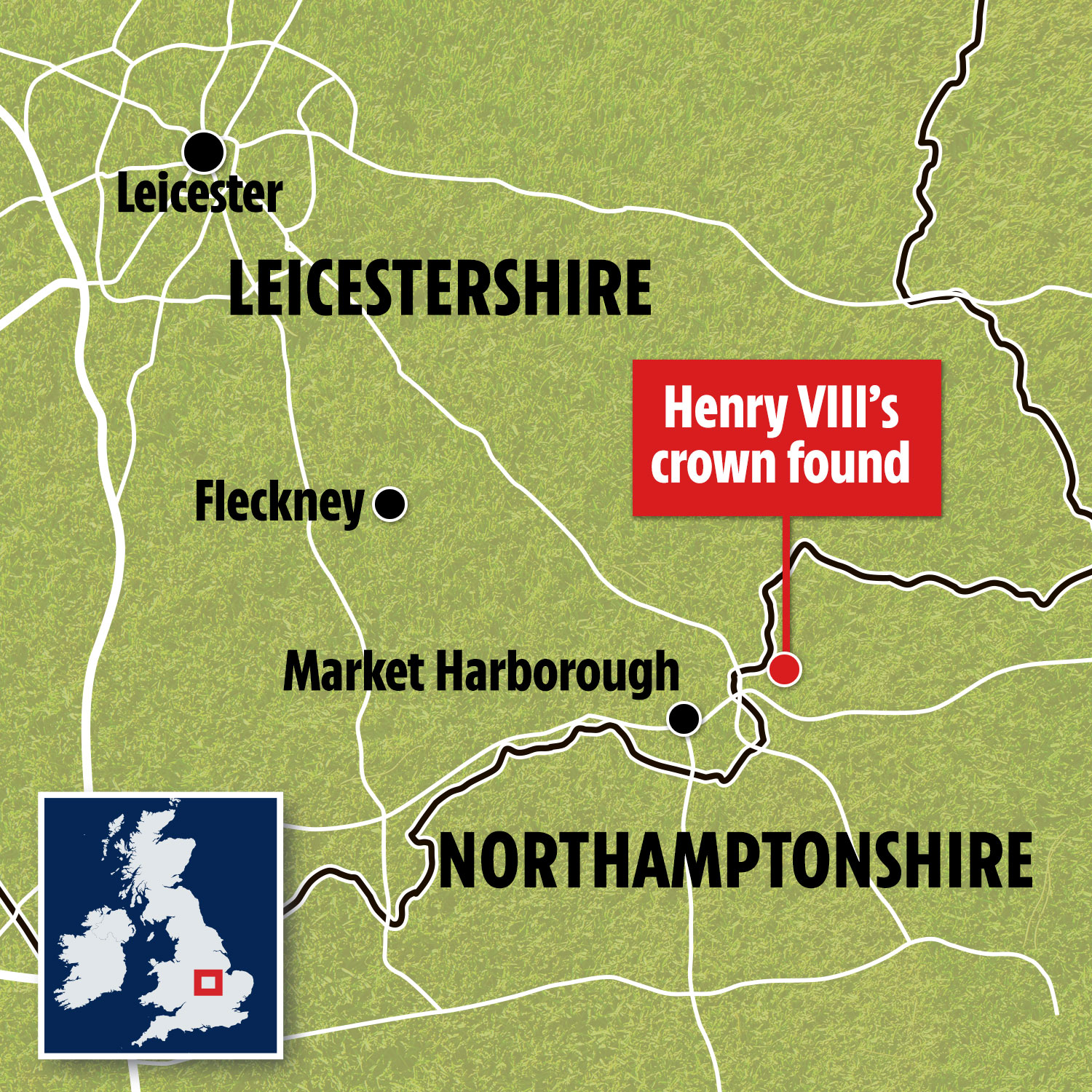 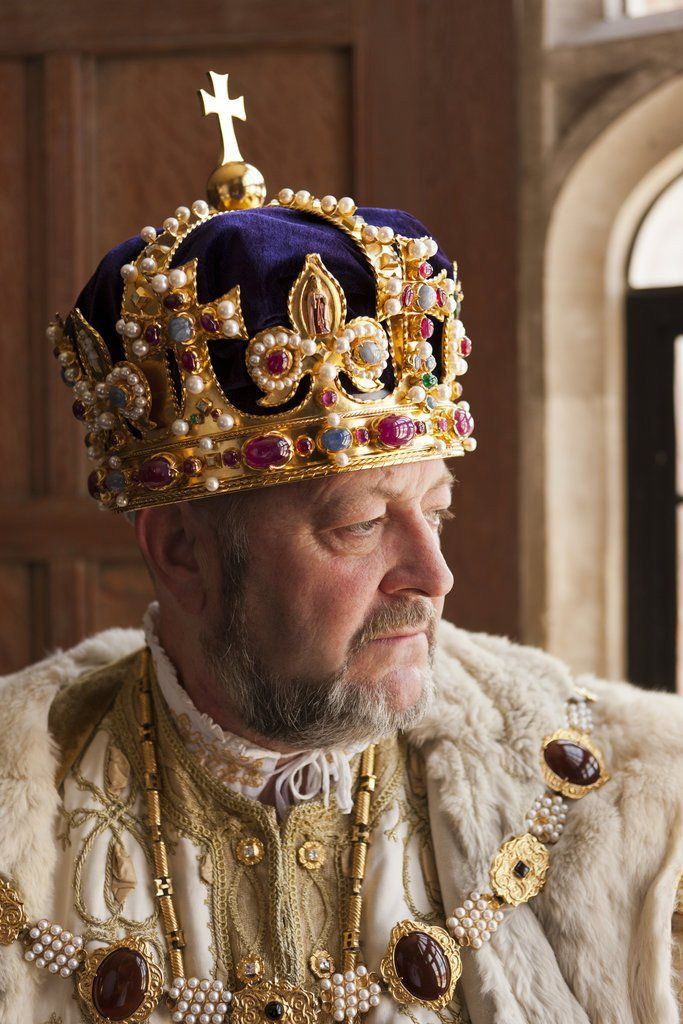 Its 344 precious stones were sold separately while other parts of the crown were passed on intact never to be seen again.

Kevin took his find home to Fleckney, Leics, cleaned it up and contacted his find liaison officer before starting his own research.

He was certain the figure was of Henry VI, later proclaimed a Saint.

By chance he had read an article detailing how Henry VIII altered his crown during his 36-year reign.

Its five fleurs-de-lys — the decorative lily linked to royalty — were originally adorned with three figures of Christ, one of St George and one of the Virgin and Child.

Henry VIII removed the figures of Christ and replaced them with three saint kings of England: St Edmund, Edward the Confessor and Henry VI.

He wore the crown at his 1509 coronation and when he married Anne of Cleves, the fourth of his six wives, in 1540.

The headpiece was later used at the coronations of his children, Edward, Mary and Elizabeth, and then of James I and Charles I.

Crucially, Charles I was stood with the crown in a 1631 portrait by artist Daniel Mytens.

Charles fled Cromwell after the Battle of Naseby in 1645 and travelled the route where Kevin found his treasure.

It is possible it became detached as Charles escaped, or he buried it to keep it from Cromwell.

In 2012, experts at the Historic Royal Palaces used the Mytens painting to create a replica of the crown and put it on display at Hampton Court Palace.

Kevin said: “I’d seen the replica on YouTube and the tiny figures on the fleurs-de-lys but I couldn’t be sure.

“I headed to the palace to find out.

“I’ll never forget the sheer excitement as I got closer to the Grand Hall where the replica sat in all its glory.

“I entered the room and my figurine’s identical twin was staring right at me.”

Kevin, a detectorist for 20 years, said: “I’m very proud to have rediscovered it for the world to enjoy and study.

“Henry VIII is one of Britain’s most iconic kings.”

“It is tantalising to imagine its true history.” 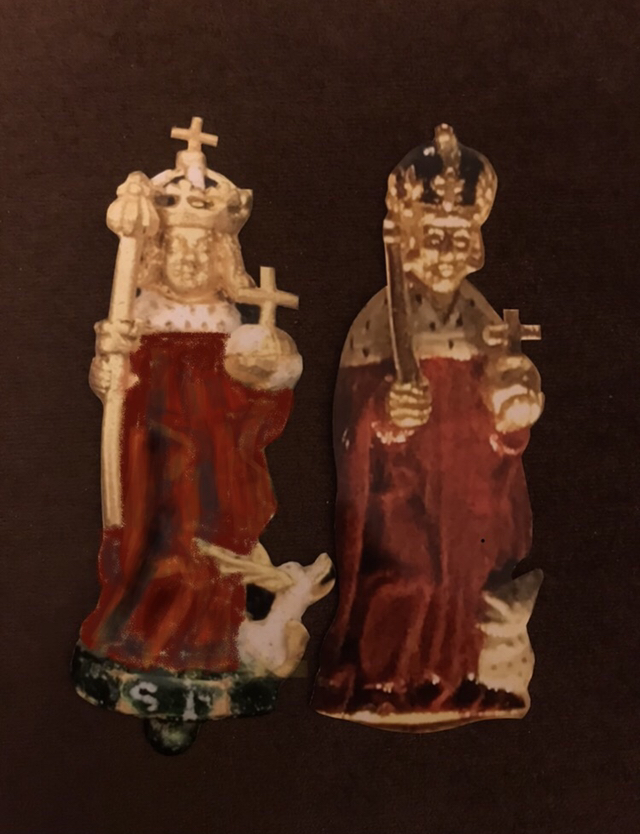 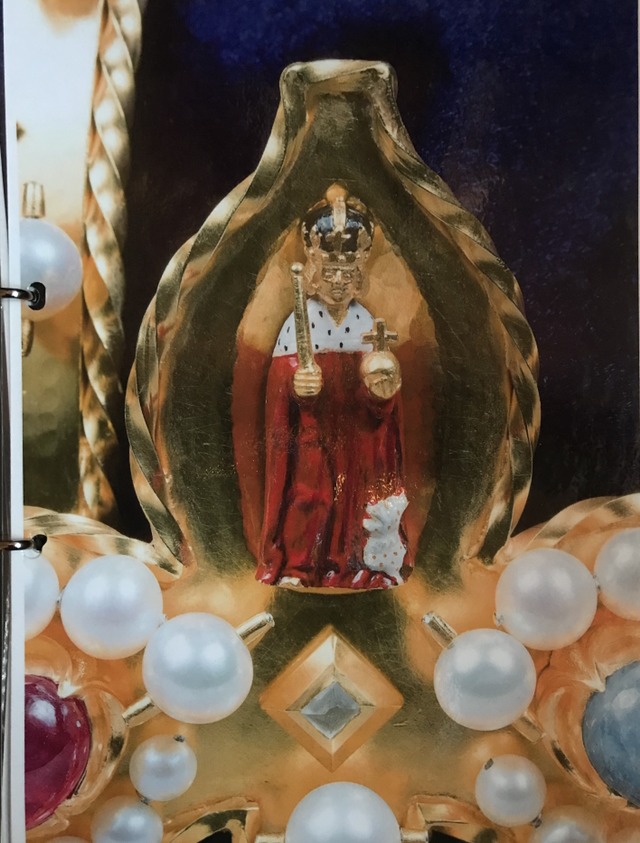 The British Museum is continuing to research the piece. If verified, Kevin must offer it for sale to a museum at a price set by an independent board.

The full story is featured in next month’s Treasure Hunting magazine.

Editor Julian Evan-Hart said: “It’s an extraordinary find. The case is pretty much cut and dried. All that’s required now is some form of official confirmation.”