The EU is set to approve Covid vaccine passports for holidaymakers: Tourists will be allowed into bloc without a test two weeks after receiving their second dose under plan for summer

British holidaymakers could soon be jetting to sunny European beaches as Brussels is set to approve vaccine passports later on Wednesday.

EU ambassadors are expected to green light a plan which allows fully-vaccinated Britons to enter without requiring a Covid-19 test or quarantine, providing they had their second dose within the last two weeks.

Currently, the Government rates all European countries as ‘amber’ – requiring quarantine and two PCR tests – except for Portugal and Gibraltar which are on the green list.

Boris Johnson’s Cabinet were yesterday accused of sowing ‘mass confusion’ as one minister suggested that journeys to amber list countries were OK, only for the PM to later overrule him and warn that such travel was unacceptable.

Sunbathers relaxing on a beach in Greece. British holidaymakers could soon be jetting to sunny European beaches as Brussels is set to approve vaccine passports later on Wednesday.

Germany is planning to open up its vaccine drive to everyone over the age of 18 in the coming weeks as it attempts to catch up with the UK, which has vaccinated the fastest in Europe

Member states can accept tourists from ‘third countries’ (non-EU states) if they have been fully-vaccinated with a vaccine that has been approved by the EU – although this could be extended to include those which have WHO approval.

Children who have not yet been able to have a jab will be allowed to enter with their families providing they have a negative test.

Without the EU plan, countries are still able to welcome non-EU citizens under their own national rules.

Portugal and Greece are among the countries that have already begun welcoming UK tourists without an EU-wide move.

The EU is expected to produce its own ‘green list’ which permits holiday travel from non-EU countries that have an infection rate below 100 cases per 100,000 people. The current rule is set at 25 cases per 100,000.

At the moment the bloc’s green list is limited to seven of the world’s lowest risk countries, including Australia, New Zealand and Singapore.

Members states will be invited to set up protocols which allow Britons to use their NHS app as a vaccine passport. Those who are not fully-vaccinated will have to provide a negative test.

The EU’s draft caveats the infection rate rule with mention of ‘variants of concern’ – meaning that even if a country fell within the 100 cases per 100,000 threshold, they could still be barred from the green list.

EU member states are going to allow fully-vaccinated people from non-EU countries to enter based on whether their country of origin has an infection rate below 100 Covid cases per 100,000 people – Britain falls comfortably within this category with an infection rate of 44.

Those who have not had a vaccine from one of those low risk countries will have to have negative test before setting off.

Droves of Britons have already taken advantage of cheaper prices and booked to travel abroad to amber list destinations, with most planning to head to Spain, France, Greece and Italy.

With a new traffic light system brought in on Monday to allow some foreign holidays to resume again after months of coronavirus lockdown, Boris Johnson stressed countries on the amber list were ‘not somewhere where you should be going on holiday’.

Mr Johnson’s official spokesman, during a briefing with reporters on Tuesday, said holidays and leisure travel should still be restricted to the limited number of countries deemed safe by ministers, such as Portugal, which is the only major viable tourist destination on the quarantine-free green list.

But two Cabinet ministers appeared to offer a different reading of the rules, with Environment Secretary George Eustice telling broadcasters people could go to amber-listed countries as long as they observed quarantine rules on their return.

Welsh Secretary Simon Hart, speaking after Mr Johnson’s comments on the matter, told Times Radio the public should ask themselves whether a trip to a country on the amber list was ‘essential’, before conceding that ‘some people might think a holiday is essential’.

And despite the presence of a green list comprising 12 countries and territories, health minister Lord Bethell told peers he considered all foreign travel to be ‘dangerous’ and urged Britons to holiday at home this summer.

Education minister Gillian Keegan told Sky News: ‘As with many of these things we have had throughout the pandemic, this has been about relying on the great British public to be sensible and follow the guidance we have put in place and taking their own decisions really.

‘But, no, we wouldn’t advise going on holiday to the amber list countries.’ 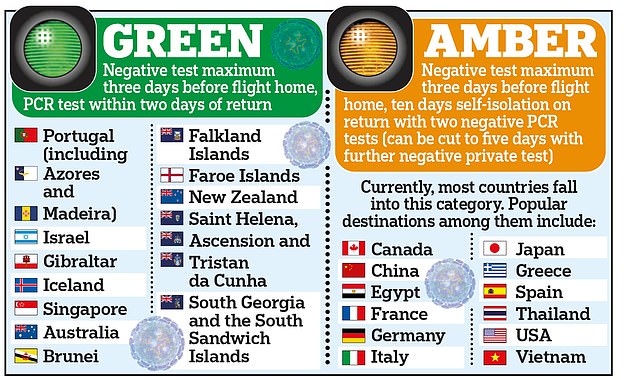 Millions are taking a punt and have booked holidays to Amber List nations, especially in Europe, despite warnings not to fly out 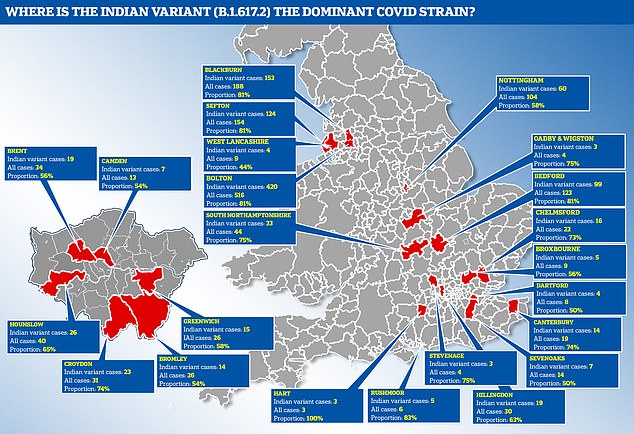 It is not the first time that the variant has been detected in Germany, but it does come amid increased fears about the virus after it began spreading rapidly in the UK (pictured, areas where the variant is now the dominant strain)

Mr Johnson could face pressure to clarify the situation when he takes Prime Minister’s Questions on Wednesday.

An aviation industry chief said Lord Bethell’s comments would cause ‘confusion’ for families with trips booked.

Tim Alderslade, chief executive of Airlines UK, said: ‘These comments are simply not correct and will cause real anger amongst the hundreds of thousands of people whose livelihoods depend on international travel, and confusion amongst families who have booked travel under the Government’s own restart policy.’

The criticism came amid reports thousands of people had headed for destinations such as France, Greece, Spain and the United States – none of which are on the green list – with more than 150 flights reported to have departed on Monday when travel rules were relaxed in Britain as part of a further phase of lockdown easing.

Non-essential travel from Northern Ireland to the Common Travel Area – which consists of the UK, Republic of Ireland, Channel Islands and Isle of Man – will be allowed from May 24.